Brian McClellan is joining us today with his novel The Crimson Campaign. Here’s the publisher’s description.

GUNPOWDER AND BULLETS WILL DETERMINE THE VICTOR.

Tamas’s invasion of Kez ends in disaster when a Kez counter-offensive leaves him cut off behind enemy lines with only a fraction of his army, no supplies, and no hope of reinforcements. Drastically outnumbered and pursued by the enemy’s best, he must lead his men on a reckless march through northern Kez to safety, and back over the mountains so that he can defend his country from an angry god, Kresimir.

But the threats are closer to home…

In Adro, Inspector Adamat wants only to rescue his wife. To do so he must track down and confront the evil Lord Vetas. He has questions for Vetas concerning his enigmatic master, but the answers will lead Adamat on a darker journey.

Who will lead the charge?

Tamas’s generals bicker among themselves, the brigades lose ground every day beneath the Kez onslaught, and Kresimir wants the head of the man who shot him in the eye. With Tamas and his powder cabal presumed dead, Taniel Two-shot finds himself as the last line of defense against Kresimir’s advancing army.
In a rich, distinctive world that mixes magic with technology, who could stand against mages that control gunpowder and bullets? THE CRIMSON CAMPAIGN is the epic sequel to Brian McClellan’s Promise of Blood. 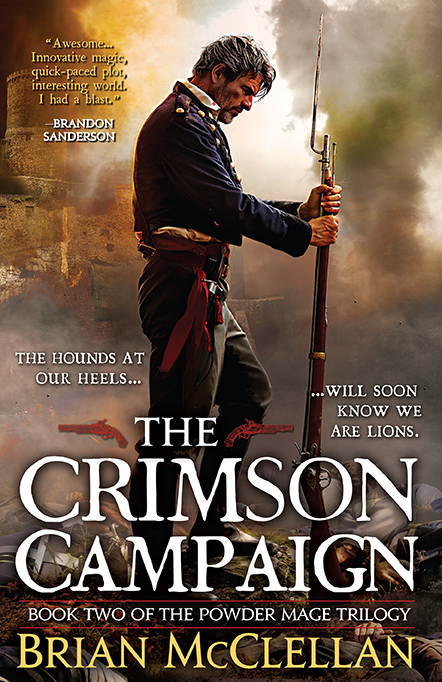 The Crimson Campaign was the first time I ever wrote a sequel, and it was far harder to write than the first book in the series, Promise of Blood. I think part of the reason was that I had a difficult time wrapping my head around what I loved about the book, which in turn kept me from really letting loose and getting it down on paper.

I knew what I loved about Promise of Blood. I had my elevator pitch (flintlock fantasy, where an epic fantasy world has progressed to its industrial revolution) and I had my cool characters and my talking points for interviews and conventions all sorted out from very early on in the writing process. But with The Crimson Campaign I was under a different sort of pressure. I was now writing under a deadline, and I was now more conscious of just how much I would need to use those talking points and really sell the book to reader after reader.

A couple different things helped me get over that hump and make me want to write The Crimson Campaign. First off, I came to terms with the fact that it was a sequel. It was okay for it to be a continuation of the first book. Yes, I had to ramp up the tension and improve my pacing and make it a better book, but the core would be the same. I was still writing flintlock fantasy in the same cool world.

The second thing that helped me move forward, and here is my favorite bit, is that I realized how much potential there is in a second novel. I hadn’t hit a wall. I hadn’t come to the end of exploring these characters and this world. I was just beginning!

Take Field Marshal Tamas, for instance. His act of dethroning and executing the king was the entire impetus behind the series. In Promise of Blood he’s established as a capable and much-loved commander, a badass fighter, and a patriot. He’s also flawed in several ways, guided by his emotions with a lifetime of mistakes, regret, hatred, and ambition bubbling just beneath the surface.

In The Crimson Campaign, I’m really able to let Tamas shine. Not just as a hero, but as a character with all the damages of a normal human being. The book opens with him committing a severe blunder that effects the entire direction of the war with neighboring Kez. Tamas is forced to grapple with his own legend, and we realize that he’s just as fallible as anyone else. And then we get to see why he’s considered one of the greatest commanders in all the Nine.

In the end, what I loved about The Crimson Campaign was the opportunity for me to add real substance to the world that I created in Promise of Blood. I was able to build upon the foundation of the first by exploring characters, adding new allies and villains, and expanding the universe with conflict outside of Adro. Once I could see the potential in the book it became not a chore, but an absolute blast to write.

Brian’s flintlock epic fantasy novel, Promise of Blood, was released last year. It was a finalist in the Goodreads Reader’s Choice Award for Best Debut Novel and was blurbed by such epic fantasy power houses as Brandon Sanderson, Brent Weeks, and Peter V. Brett. Brian lives in Cleveland, OH, with his wife and pets, where he plays computer games, reads, and keeps honey bees in his spare time.

3 thoughts on “My Favorite Bit: Brian McClellan talks about THE CRIMSON CAMPAIGN”