Kameron Hurley is joining us today to talk about her novel The Light Brigade. Here’s the publisher’s description:

They said the war would turn us into light…

The Light Brigade: it’s what soldiers fighting the war against Mars call the ones who come back…different. Grunts in the corporate corps get busted down into light to travel to and from interplanetary battlefronts. Everyone is changed by what the corps must do in order to break them down into light. Those who survive learn to stick to the mission brief–no matter what actually happens during combat.

Dietz, a fresh recruit in the infantry, begins to experience combat drops that don’t sync up with the platoon’s. And Dietz’s bad drops tell a story of the war that’s not at all what the corporate brass want the soldiers to think it is.

Is Dietz really experiencing the war differently, or is it combat madness? Trying to untangle memory from mission brief and survive with sanity intact, Dietz is ready to become a hero–or maybe a villain; in war it’s hard to tell the difference.

A worthy successor to classic stories like Downbelow Station, Starship Troopers, and The Forever War, The Light Brigade is award-winning author Kameron Hurley’s gritty time-bending take on the future of war. 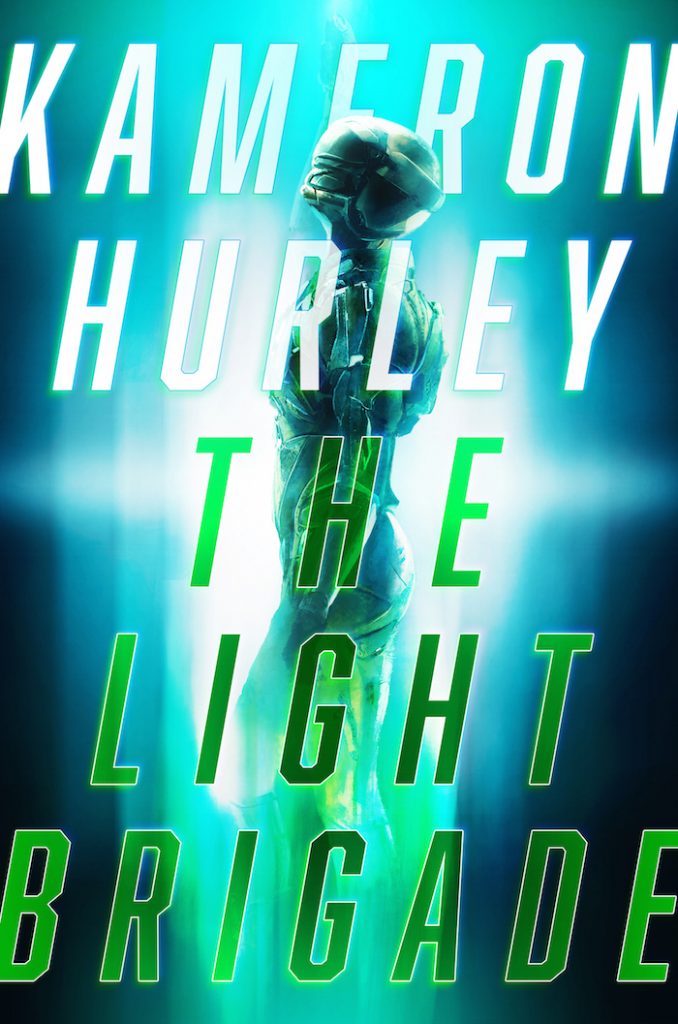 When I was very young, my grandmother admonished me for complaining about how long it was taking to make lunch. “You’re very lucky, you know,” she said. “Your grandfather grew up during the Depression. And me, I was in France during the war! There was never enough to eat. When your grandfather found an injured seagull at the beach, they took it home and ate it for dinner.”

I would remember this story again when I rescued a bird from my grandmother’s cat not long after. Were we going to eat it? What would happen to it? I hid it in a shoebox for a while, until my cousin discovered it, and then we showed it to my grandmother. She made us keep it outside. It didn’t recover. But at least we didn’t eat it.

It’s interesting to me what types of stories stick with us from our childhood, which impressions. My novel The Light Brigade has a lot of big ideas: time travel, interplanetary war, dangerous tech, propaganda and psychological manipulation and a lot more. But while those big ideas may draw one to dive into a story, the beating heart of many books isn’t the big idea, but the smaller, emotional ones. The ordinary people caught up in something extraordinary.

My memory, and the emotions attached to it, became my protagonist Dietz’s memory. It’s the memory that haunts Dietz all through military training, hungry, exhausted, and missing a family taken too soon by war. It became this:

I remember scavenging on the beach of a sludgy river called the Tajo Luz, me and my cousins. My brother was too young, still slung across my mother’s back. She walked ahead of us, scraping at the beach with a homemade rake, uncovering bits of discarded junk.

Farther up the beach, where the sand turned to scrub, a flash of movement caught my eye. I climbed the shallow dunes. Nestled at the top was a twisted mat of plastic ties, broken twigs, aluminum shavings, and synthetic fibers. A baby pigeon rested there, half in and half out of the nest. One wing lay outstretched, flapping uselessly. I took the poor little creature into my hands.

“It’s all right,” I murmured. I ran my finger over its quivering head. Its heart fluttered against my palm.

I slid down the dune and ran to catch up with my mother. I was barefoot, but the rough ruins of the beach hardly bothered me anymore. My feet were dirty, calloused things, hunks of sturdy meat.

“Mama!” I called. She turned, her dark hair blowing back over her shoulder. The sun rose behind her, thick and runny as fresh egg yolk.

“Let’s get that home,” she said, and she smoothed the hair from my face. It reminded me of how I had stroked the bird’s tiny head.

I beamed at her.

We took the baby bird home along with six mollusks, some copper wire, and a meter-long metal hunk that bore the faded gray circles of the NorRus logo.

I slept that night next to the baby bird. In the morning, my mother boiled off the bird’s feathers and cooked it whole. I’d like to tell you I had no stomach for it. But if you think for a minute I didn’t want to shove that weary bird down my gullet despite having sung it to sleep the night before, then you have never been hungry.

My mother ate the bird herself, to ensure she made enough milk for my brother. I sat across from her on the floor and watched her consume the entire fledgling in three crunchy bites.

I didn’t cry until she left to greet my father, just home from an expedition to the dumps of medical waste outside the nearby military training academy. Until Teni needed more pilots for the war with Mars, years later, we were nobodies. Ghouls. Just like everyone else there.

I had a realization about my mom and how she relates events to us. She often tells exaggerated, inaccurate tales of encounters and experiences. I wouldn’t say she is intentionally lying. As my father put it: she is conveying the emotion of the experience as it feels to her, not the blow-by-blow of the events. The “logical” truth of a thing is not her emotional truth.

This is what many writers do. We take moments from our lives and the lives of others, and we ferret out the core emotion of those moments, those stories. Then we retell them, we fictionalize them, but because the emotion itself is true, the story feels real as well. It’s a bit of a magic trick.

The Light Brigade is the best book I’ve written to date, and I can’t wait for others to dive into this world: big ideas, small ideas, messy emotions, real truths, and all.

Kameron Hurley is the author of The Light Brigade (March 2019), The Stars are Legion and the essay collection The Geek Feminist Revolution, as well as the award-winning God’s War Trilogy and The Worldbreaker Saga. Hurley has won the Hugo Award, Locus Award, Kitschy Award, and Sydney J. Bounds Award for Best Newcomer. She was also a finalist for the Arthur C. Clarke Award, the Nebula Award, and the Gemmell Morningstar Award. Her short fiction has appeared in Popular Science Magazine, Lightspeed and numerous anthologies. Hurley has also written for The Atlantic, Writers Digest, Entertainment Weekly, The Village Voice, LA Weekly, Bitch Magazine,and Locus Magazine. She posts regularly at KameronHurley.com