Kameron Hurley is joining us today to talk about The Broken Heavens. Here’s the publisher’s description:

The Dhai nation has broken apart under the onslaught of the Tai Mora, invaders from a parallel world. With the Dhai in retreat, Kirana, leader of the Tai Mora, establishes a base in Oma’s temple and instructs her astrologers to discover how they can use the ancient holy place to close the way between worlds.

With the connected worlds ravaged by war and Oma ascendant, only one world can survive. Who will be sacrificed, and who will be saved, when the heavens finally break? 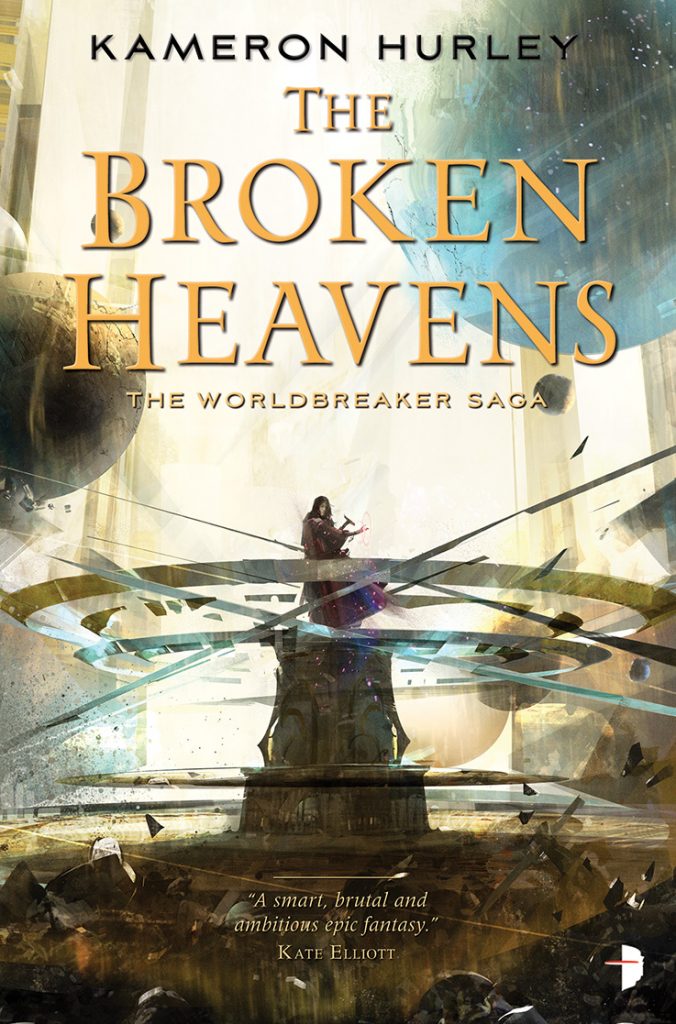 What does it mean to say your favorite part of writing a book was when you knew it was over?

I’ve spent the last five years writing the final book in my Worldbreaker Saga, The Broken Heavens. In truth, I probably rewrote the entirety of the book three times.

Oh, sure, I wrote other books in there as well – in the last nine years I’ve published eleven books – but with this one, well… I kept typing and wailing and drinking and wailing some more until I got the ending right and my agent said it was good. I revised the whole first half again after we’d turned it into my editor, and then again… and then we shipped it.

That was my favorite bit. The shipping part.

It took a long time to figure out how to end a fantasy epic where folks are fighting their doubles from parallel worlds; an epic about genocide and morally gray choices and star magic and small people caught up in events far larger than they can comprehend. I transformed a scullery girl who really is the daughter of nobodies into the driving force of a resistance against genocide and autocracy. I smashed together whole worlds and drove numerous characters to find and fight disparate versions of themselves, all of whom had made different, and often more terrible, choices.

It’s a lot to keep in your head.

Books are tricky pieces of storytelling. Ending a series of books carries with it even more complexity. I wanted this book done right, though, not just on time. No one’s going to remember a book was on time if it’s crap. They will remember that it was crap.

Saying too much about how I ended this book will be giving a lot away, even though the ending is my favorite part. I had set myself up to give my characters two terrible endgame choices. But when I gazed out at the world around me, I realized those were false choices. And I wanted my characters to realize that too. But how I was going to achieve that… I had no idea. It took me years to figure it out.

And now you all get to see what I came up with.

I am pleased I didn’t go with the easy choice. Pleased that I pushed my characters and myself to be smarter than that.

I know a number of people who say they won’t read an epic fantasy series until it’s done. I do not actually believe this, knowing approximately how many books the top folks in fantasy are moving without having finished their final volumes.

But if you were waiting for a fiery, bloody, hopeful, gritty, fantasy saga that’s unlike anything if you’ve ever read before – you can now binge read the whole thing in a go. And rest assured – the ending is worth the wait.

Kameron Hurley is the author of  The Light Brigade, The Stars are Legion and the essay collection The Geek Feminist Revolution, as well as the award-winning God’s War Trilogy and The Worldbreaker Saga. Hurley has won the Hugo Award, Locus Award, Kitschy Award, and Sydney J. Bounds Award for Best Newcomer. She was also a finalist for the Arthur C. Clarke Award, the Nebula Award, and the Gemmell Morningstar Award. Her short fiction has appeared in Popular Science Magazine, Lightspeed and numerous anthologies. Hurley has also written for The Atlantic, Writers Digest, Entertainment Weekly, The Village Voice, LA Weekly, Bitch Magazine, and Locus Magazine. She posts regularly at KameronHurley.com.