Today Joanne C. Hillhouse joins us to talk about her new novel, Musical Youth. Here is the publisher’s description:

Can one summer make the difference of a lifetime?

Zahara is a loner. She’s brilliant on the guitar but in everyday life she doesn’t really fit in. Then she meets Shaka, himself a musical genius and the first boy who really gets her. They discover that they share a special bond, their passion for music, and Zahara finds herself a part, not just of Shaka’s life, but also that of his boys, the Lion Crew.

When they all get roles in a summer musical, Zahara, Shaka, and the rest of the Lion Crew use the opportunity to work on a secret project. But the Crew gets much more than they bargained for when they uncover a dark secret linking Shaka and Zahara’s families and they’re forced to confront some uncomfortable truths about class, colour, and relationships on the Caribbean island of Antigua.

So what is Joanne’s favorite bit? 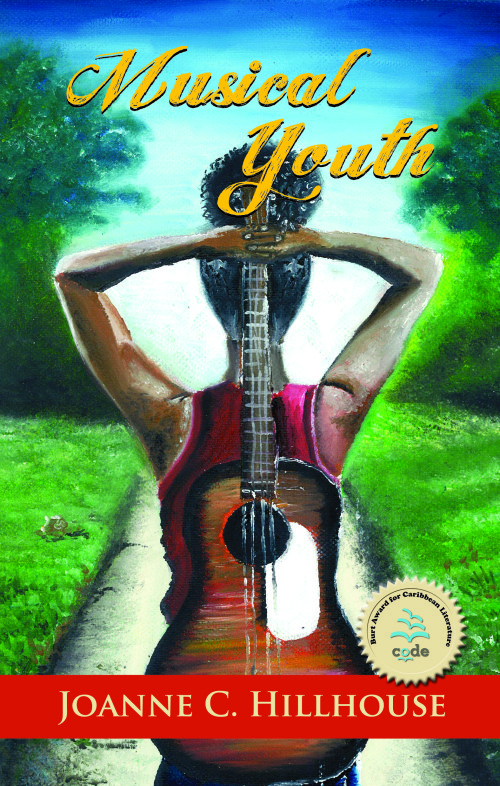 Some of my favourite bits in my novel teen/young adult novel Musical Youth spotlight the relationship between the boys, something we don’t see enough – the ways they ground and at the same time grind (mercilessly tease) each other. In the case of Shaka and his Lion Crew, they are a family of their own making and anyone developing a relationship with one is essentially developing a relationship with the whole group. As Zahara discovers when Shaka tries to help her get over her shyness when it comes to playing her guitar in front of others:

She wanted to stamp her feet; she didn’t like him playing games with her.

She stood there in a dark so dark she couldn’t even see her feet, and tears stung her eyes.

“Play,” he urged, his voice coaxing.

And she breathed, and breathed again, and lifted the guitar; it was awkward, she didn’t have a strap and it kept slipping. Still, she closed her eyes, tears wetting her lashes, and she strummed, conscious that he was out there in the dark somewhere listening to her. And what happened as she played was that his presence, his silence, his attentiveness, his encouragement, his invisibility and the music she had never been able to resist had a calming effect on her. Her strumming grew more assured, Lauréna Lee right there at the tips of her fingers. At the last lick of her pick, she opened watery eyes to find his face inches from hers, she hadn’t even heard or felt him come closer.

She thought he might kiss her then, held her breath; but he merely asked, “how you feel?”

She searched her heart. “Happy,” she said.

Her fingers were still tingling, and the electricity of it travelled up the rest of her body until she felt like she had to move or scratch or dance or something. She leaned forward and kissed him.

“Mi boy goin’ get some,” said another.

And she looked past him, squinting, to see Kong, Accident, Monkey, Scaly, and Big Head.

Shaka rolled his eyes and she tried to be mad but she was still tingling. Besides, of course, he’d brought his Crew, she’d quickly learned that they were extensions of each other. She kind of envied them that.

Wow, choosing a favorite bit was hard. I thought about a section near the end where Shaka reflects on his bond with his boys; but then thought, no, show, don’t tell. However, given that I write from an authentically Caribbean space, allowing my characters to live and breathe as they are, picking an excerpt that showed that bond was also challenging. Context would be sacrificed and context is important in helping the non-Caribbean reader especially access the rhythms, speech, and sensibilities of lives that might be unfamiliar to them. Also I wanted to include Zahara and music, and a bit of the book’s broader themes – Zahara’s path to confidence through creative expression, the ways Zahara and Shaka bond over music and help each other to grow…while hinting at the tone of the relationship between the boys. I think this scene comes as close to doing all of that better than anything else I could have chosen.

Antiguan and Barbudan writer Joanne C. Hillhouse wrote The Boy from Willow Bend, Dancing Nude in the Moonlight (since re-issued as Dancing Nude in the Moonlight 10th Anniversary Edition and Other Writings), Fish Outta Water, Oh Gad! and Musical Youth, which placed second for the Burt Award for YA Caribbean Literature in 2014. Her writing fiction and/or poetry have appeared in Pepperpot: Best New Writing from the Caribbean, In the Black: New African Canadian Literature, and other journals and/or anthologies. She runs the Wadadli Pen writing programme. For more: http://jhohadli.wordpress.com or http://www.facebook.com/JoanneCHillhouse.