Jason LaPier is joining us today with his novel Unclear Skies. Here’s the publisher’s description:

Justice isn’t what it used to be

Rogue cop Stanford Runstom blew open a botched murder case and was given a promotion – of sorts. But doing PR work for ModPol, the security-firm-for-hire, is not the detective position Runstom had in mind, particularly when his orders become questionable.

Freedom always comes at a price

Despite being cleared of false murder charges, Jax is still a fugitive from justice. When ModPol catches up with him, keeping his freedom now means staying alive at any cost, even if that means joining Space Waste, the notorious criminal gang.

Security can be deadly

When ModPol and Space Waste go head to head, old friends Runstom and Jax find themselves caught between two bloodthirsty armies, and this time they might not escape with their lives. 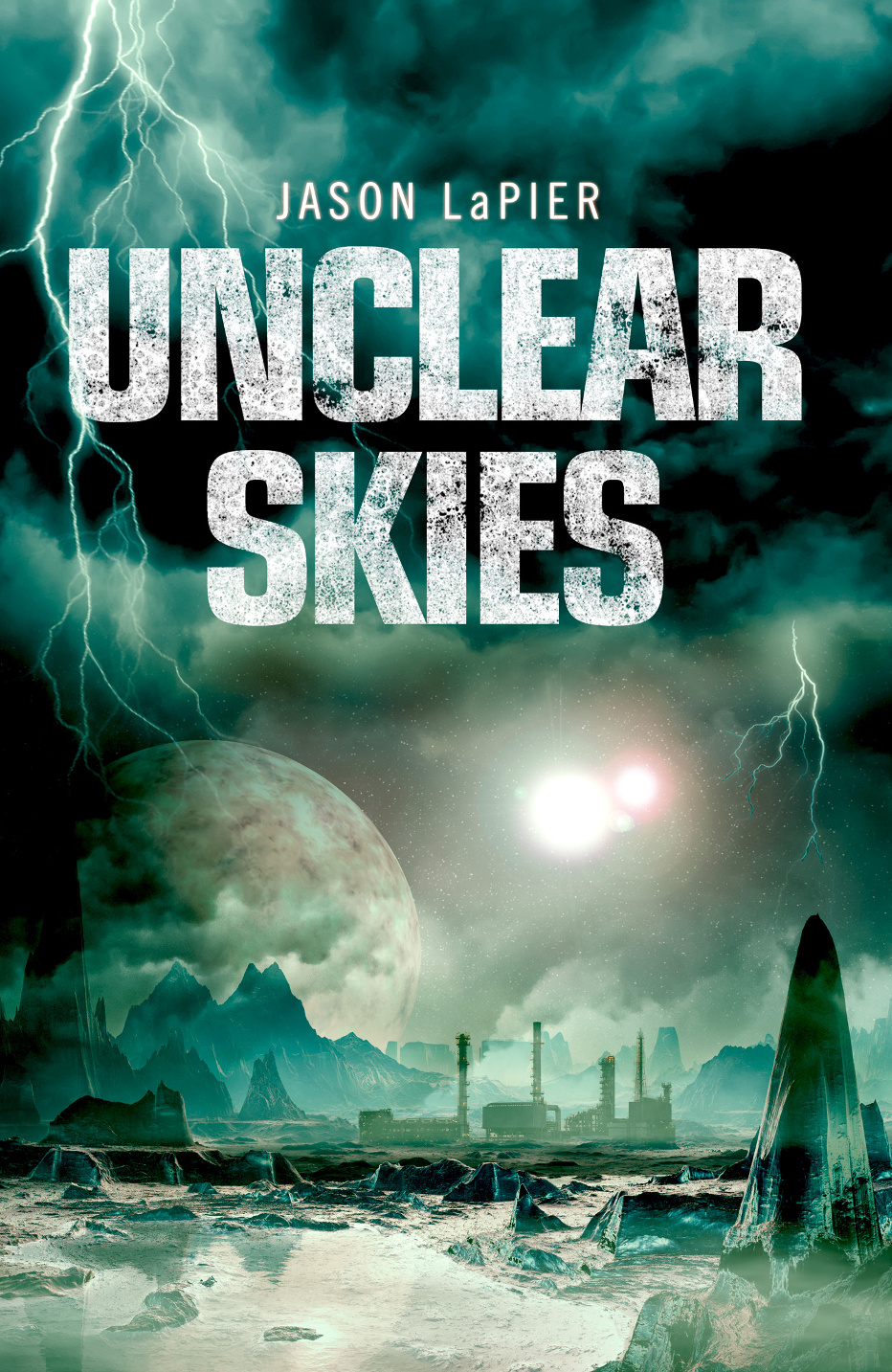 My favorite bit about Unclear Skies? That would be the character arcs. Taking these characters into the second book of The Dome Trilogy really gave me an opportunity to deepen their backstories and broaden their growth by forcing challenges on them with higher stakes.

Jax was once a life support operator in a 27th century dome on a planet orbiting Barnard’s Star, with an easy job and an apathetic life. He’s forced out of his shell when he’s wrongfully accused of killing a block of residents. In the first book of the series, Unexpected Rain, this event was enough of a shock to compel some character growth out of Jax: he found himself in many “adapt or die” situations (or in some cases, “adapt or go to prison for life”). In the second book he remains a fugitive and is essentially homeless – to the point where his sense of humanity is in danger. He doesn’t have the most basic needs: shelter and food. He’s alone. He’s depressed and feeling hopeless. He has to pull himself back into the world as someone else, take on a new identity, and in a place so different from the domes he grew up in. When the opportunity presents itself for Jax to make himself useful, to allow himself become more than a shadow, he takes it. He saves lives with his knowledge, but at the risk of exposing himself – both to the authorities he’s eluding and to the people who he’s grown close to.

In Unexpected Rain, Stanford Runstom is a police officer who longs to become a detective. In the follow-up, Unclear Skies, he’s been “promoted” into the public relations department. He still believes in the vision of the interstellar organization that employs him, Modern Policing and Peacekeeping: to provide justice and defense services to civilizations that have evolved to eras of peace, but still in need of protection on occasion. He’s uncomfortable with the semi-celebrity status he’s acquired for his role in solving the mass murder that Jax was accused of, and even more uncomfortable that his new job is not police-work, but instead marketing-work. Runstom has always felt out of place – a rare birth anomaly has given his skin a green tinge and marks him as an outsider in any habitat he visits – but being forced to do work he doesn’t understand exacerbates that feeling. When he can’t be a cop in the face of danger, he finds a new quality in himself: the ability to stand up and lead. Ultimately – without giving too much away – Runstom reconnects with his past in unexpected ways. This allows us to learn much more about the man who clings to a sense of justice like it’s the only anchor in a chaos-filled life.

Dava was kind of a secondary main character in the first book of the trilogy. Now in Unclear Skies, she becomes a true central character. She starts as an assassin who prefers to work alone; as an Earthling who was orphaned during the ride from Earth to the domes, she’s always felt outcast. Due to the effect that dome filtration systems have on pigmentation, Earthlings like Dava are the only humans around that still have dark skin, and thus her heritage is unmistakable. One of the few black-skinned people she knows is Moses Down, the man who “rescued” her from her dome life, albeit into a life of organized crime. He is like a father to her: a connection she struggles with, is confounded by. She even once toyed with the notion that she was in love with him. These are all the convoluted thoughts and emotions of someone who was plucked from her home and lost her family and forced to live as an outsider in a new world.

Now Moses wants Dava to become a leader, and through the course of Unclear Skies, she struggles to learn how to meet his expectations. She thinks what’s blocking her is her inability to trust others. But what is really holding her back is not her inability to connect with her fellow gangbangers – it’s her fear of connecting to them. It’s a fear of caring, because they can be so easily taken away. A fear of allowing them to become her family; though she doesn’t yet understand that, the concept being so foreign to her.

Together, these three very different characters share similarities in their arcs. In their own ways, each is struggling with a lack of home. The old saying “home is where the heart is” only goes so far. In the Maslow’s pyramid sense of “needs”, a human being needs shelter at the most basic level. A human being also needs family and companionship. And higher up, a human being seeks a sense of belonging. That’s what home is: a shelter, a family, and a place where you belong, and each of these characters is missing some part of that equation. They are driven unconsciously by the desire to correct their imbalances and find their true homes.

So my favorite bit about Unclear Skies is that I get to watch these characters continue to grow, continue to broaden and deepen, and that I get to set them on a path toward what it is they truly seek, even if they don’t yet know what that end-goal is.

Born and raised in upstate New York, Jason now lives in Portland, Oregon with his wife and their long-haired dachshund. In past lives he has been a guitar player for a metal band, a drum-n-bass DJ, a record store owner, a game developer, and an IT consultant. These days he divides his time between writing fiction and developing software, and doing Oregonian things like gardening, hiking, and drinking microbrew.