J Tullos Hennig is joining us today with her novel, Shirewode. Here’s the publisher’s description.

Book Two of the Wode

The King of the Shire Wode. That is what they will call you.

Years ago, a pagan commoner named Rob of Loxley befriended Gamelyn Boundys, a nobleman’s son, against seemingly insurmountable odds—and with horrific consequences. His home razed by order of the Church, Rob was left for dead, believing his sister, Marion, and his lover, Gamelyn, had perished.

But Gamelyn yet lives. Guilt-ridden by his unwitting betrayal of Loxley, one of the last bastions of the Old Religion, Gamelyn rides off to seek absolution in the Holy Land. Rob vanishes into the greenwode and emerges as leader of a tight-knit band of outcasts who revolt against the powers that be.

When the two lovers meet again, it will be in a brutal, blindfolded game of foxes and hounds that pits Templar assassin against Heathen outlaw. Yet the past cannot be denied, and when Rob discovers Marion is also still alive, the game turns. History will chronicle Robyn Hood and Guy of Gisbourne as the deadliest of enemies, but the reality is more complicated—and infinitely more tragic. 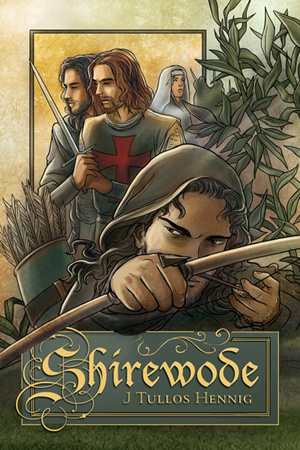 Thanks, Mary, for giving me the opportunity to ponder this.

And I did ponder a while before coming to the realization that nearly all my Favourite Bits start out as distinct challenges. This Bit, at its heart, had a weird polar opposition: something so familiar it could inspire groans instead of cheers… yet something no fictional representation has cared to broach.

There are so many Guys of Gisbourne, after all This Bad Guy has been in almost every version of Robin Hood for the past hundred years, he has graced books, plays, movies and television series. So my Guy (oh dear, that really does sound like the Mary Wells tune, doesn’t it? *facepalm*) had to have something different about him, some twist in motivation and being. Of course the main twist, that he and Robin (aka Robyn) were boyhood lovers, is definitely new, but it influences the story’s character, not just Guy’s. Also, many of those aforementioned Guys are a departure from the ballad, not the one-off horsehide affecting bounty hunter hired by the Sheriff to kill Robin Hood. I really wanted to go back to the original ballads.

And in those ballads lay the answer. Right there, in the text of Robin Hood and Guy of Gisburne. Bounty hunter. Horsey drag. And not just some little horsehide cape, but the Full Monty of “top and tayle and mayne”. While Guy has become quite popular, no one seems willing to deal with the horsy drag. And why?

Because it’s frankly more than a few bales shy of a cartload. Even Robin, in the original ballad, thinks Guy is addlepated for wearing it.

But, man, what an opportunity! I grabbed it and ran. And stopped about four paces in. I mean, it is addlepated. However to make it fly?

At least I had options:

Starting with #1… I wanted Guy to not be either insane or dim-witted–those are roles he’s played many times already. #3… well, horsy drag is actually not as mad as one might suppose. Stalking horses were used for hunting, where, yes, people did dress up as horses to confuse their body lines. But while Guy is hunting, it’s not for the king’s deer but a wolfshead… a very human outlaw and one Guy believes to be a pretender to the magical covenant of the Shire Wode…

Given the choice between bread and mead and mythos… well, I’ll whinge, because I really like bread and mead, but mythos will always win. And this challenge (like most when you stop fighting them and just be present) layered itself, as I wrote, with all sorts of yummy subtext and symbolism. So…

What happens when a Templar assassin tries to infiltrate a Pagan ritual and ends up dressing as the hob horse, one of the more powerful symbols of Pagan ritual?

Here’s a bit of that Bit:

The Tup… The Wode Horse… It hissed through and over the crowd, excited murmurs, echoes in the trees.

Within a matter of moments, Guy was amidst a small crowd of masked revelers, a dance twining and spiraling about him. The ones coming the closest were mostly females, and they were laughing, each trying to shove the other toward him.

Guy had to force himself to not turn tail and run. Inconceivable, that a bunch of maidens would nearly make him retreat when he had faced down desert armies.

Abruptly he remembered the teeth on his mask, groped at his chest, yanked at the string. The teeth snapped together with decided effect; the lasses shrieked, darted away. But they were laughing, and they kept coming back for more.

Fairly soon he was the center of laughing and hollering folk, pulled into the dance. The dancing line swung past the river, curled about, and came back to the caverns. Guy played his part, every sense heedful. Waiting.

“’Tis time for the horseplay, aye?” A growling purl of a baritone, its common accent not dodging its power in the least. Everyone turned, expectant. The surge forward and murmurings of the surrounding people revealed everything: who it was, and why.

Waiting was over. It stood, limned by fire, in the largest of the cavern openings. A man… a beast… unbelievably tall with an immense, fourteen-point rack seeming to sprout from the cowled head. Caped with furs and feathers, rags and leathers, it was impossible to see body shape, or to discern if there truly was a body beneath. The sight of it stirred the unlikeliest of fears in the deepest places; Guy barely caught himself from angling back in sheer instinct. It was the gilt on the tines, and the glint of chain—bronze and silvered—dangling from the rack of antlers like the scrapings of velvet, which pulled him further from superstitious instinct, from reaction to rational.

This was no simple pilfer from the king’s deer… the horns held upon them more wealth than any of these peasants would see in a lifetime. The Horns of the god? Was Guy looking at part of what his master had sent him for—one of the artifacts this murderous wolfshead had stolen?

The beast-man’s fire-lit eyes locked on him. Guy abruptly found himself in the midst of the circle, the masked revelers parting around him. He was left solitary, ringed by masked faces and glittering eyes.

“Did you think I’d let you do this, Gisbourne?” Full of some deep emotion, the beast-man’s mellifluous voice slapped Guy sideways and, inexplicably, traced shivers across his skin. “Take him.”

Again, many thanks, Mary, for being such a gracious host. You have a lovely place here!

About the Author:  With an inveterate fascination in other times and places, J Tullos Hennig has managed a few lifetime professions in this world–equestrian, artist, dancer–but has never successfully managed to not be a writer.  Abysmal luck had a lot to do with the late start in publishing, but her books are better now than thirty years ago, anyway.  She lives in the Pacific Northwest with her long-time spouse, and is beholden to several geriatric equines on retirement pensions–erm, pastures.