What I particularly like about J. A. Pitts is that he doesn’t take the easy route. Forged in Fire is the third book in the Sarah Beauhall series, which are what happens when you take epic fantasy and set it in modern day Seattle. Seriously. Dragons in Seattle. What could be better? He takes it up a notch in the new book, while retaining the character intimacy that he started in the first. Let’s give him a chance to tell us what his Favorite Bit is.

One of my favorite aspects of the Sarah Beauhall books is the ever evolving notion of family with all the myriad definitions, configurations and obligations. 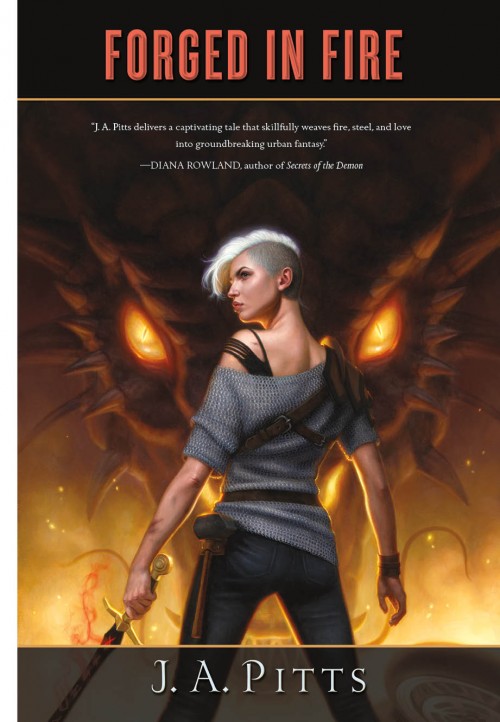 Are we doomed to only have the blood family we are born into or can we build new social structures that fulfill those same roles? When is a lover more than family? As friends come into your life, when do they cross over from being someone you like to hang out with occasionally to someone you’d fight a dragon for?

As Sarah and Katie explore their growing relationship, they begin to solidify their own social structure — stratifying individuals into support groups and mutual beneficiaries of their deeply held emotions. They bring folks into their orbit that bolster their ideas of the world, encourage their choices, shore-up their short-comings and generally band-aid their flaws.

Isn’t that what family is supposed to do?

In the opening scene of Forged in Fire, Sarah and Katie are hunting a renegade troll that has been killing livestock, stirring up the local Western Washington farmers. Only once they’ve killed the troll, they find out she’s left behind twin babies. That night, as they camp out in the troll’s lair with the orphans they discuss their own thoughts of family.

“You ever thought about having kids?” Katie asked me after the fire had burned low.

“I’ve never been all that interested,” I said. “I just never considered it something I needed to do. Don’t get me wrong, I think kids are fine.”

She made a noise beside me that I couldn’t interpret.

“But I just never figured on getting pregnant, bringing a child into this world. Especially now with everything I know about the dragons and worse.”

“I thought I’d have a daughter,” Katie said sleepily. “Someone to teach to play guitar. Someone to have tea parties with and play dress-up.”

“You never know,” I whispered. She didn’t answer and before long, I heard her steady breathing that let me know she’d gone to sleep.

Katie may very well be the best thing that ever happened to me. I cared more for her happiness than damn near anything else on the planet. I’d thought about living the rest of my life with her, back when I thought I was gonna have a long one. Now with the dragons, and the sword, Gram, I wasn’t sure I’d live out the winter. Put a totally different spin on things.

I tried to keep it together, not to let things spin out of control. But I’m not sure how well that was working for me. Let’s forget the fact I fought giants and trolls, killed a dragon, forged an ancient sword and had to deal with a crotchety and half-crazed homeless guy who either was Odin, or channeled him on a regular basis. Magic really existed in the world. There were some nasty things out there that wanted to kill me. Hell, some of them wanted to eat me.

And now, filled with a righteousness that blurred the lines of right and wrong, I’d killed this troll. She was a living, breathing, thinking, caring entity who wanted nothing more than to keep her family safe. Isn’t that what we all wanted? How did this make me any different than the fucking dragons?

I lay awake for a long time, the throbbing in my leg was dull compared to the one in my heart.

You’ll have to read the book to see what happens to those baby trolls, but the questions of family and the power behind them permeates this entire series.

Family is very important to me personally. I am fiercely protective of those I consider my tribe. Blood or bond, we have those who make our lives greater by their sheer existence and I am thankful for having them in my lives.

JA Pitts resides in the Pacific Northwest where he has hosts discussion groups with dragons, drinks fire whiskey with giants, shares recipes with hedge witches and compare tattoos to the trolls that roam the urban landscape he’s come to love.  His books can be found in all cool bookstores or on the aethernet for those magical reading devices that are popular with the hipsters.  He’s in the market for a really good sword.:

2 thoughts on “My Favorite Bit: J. A. Pitts talks about Forged in Fire”