Ilana C. Myer is joining us today with her Last Song Before Night. Here’s the publisher’s description:

A high fantasy following a young woman’s defiance of her culture as she undertakes a dangerous quest to restore her world’s lost magic in Ilana C. Myer’s Last Song Before Night.

Her name was Kimbralin Amaristoth: sister to a cruel brother, daughter of a hateful family. But that name she has forsworn, and now she is simply Lin, a musician and lyricist of uncommon ability in a land where women are forbidden to answer such callings-a fugitive who must conceal her identity or risk imprisonment and even death.

On the eve of a great festival, Lin learns that an ancient scourge has returned to the land of Eivar, a pandemic both deadly and unnatural. Its resurgence brings with it the memory of an apocalypse that transformed half a continent. Long ago, magic was everywhere, rising from artistic expression-from song, from verse, from stories. But in Eivar, where poets once wove enchantments from their words and harps, the power was lost. Forbidden experiments in blood divination unleashed the plague that is remembered as the Red Death, killing thousands before it was stopped, and Eivar’s connection to the Otherworld from which all enchantment flowed, broken.

The Red Death’s return can mean only one thing: someone is spilling innocent blood in order to master dark magic. Now poets who thought only to gain fame for their songs face a challenge much greater: galvanized by Valanir Ocune, greatest Seer of the age, Lin and several others set out to reclaim their legacy and reopen the way to the Otherworld-a quest that will test their deepest desires, imperil their lives, and decide the future. 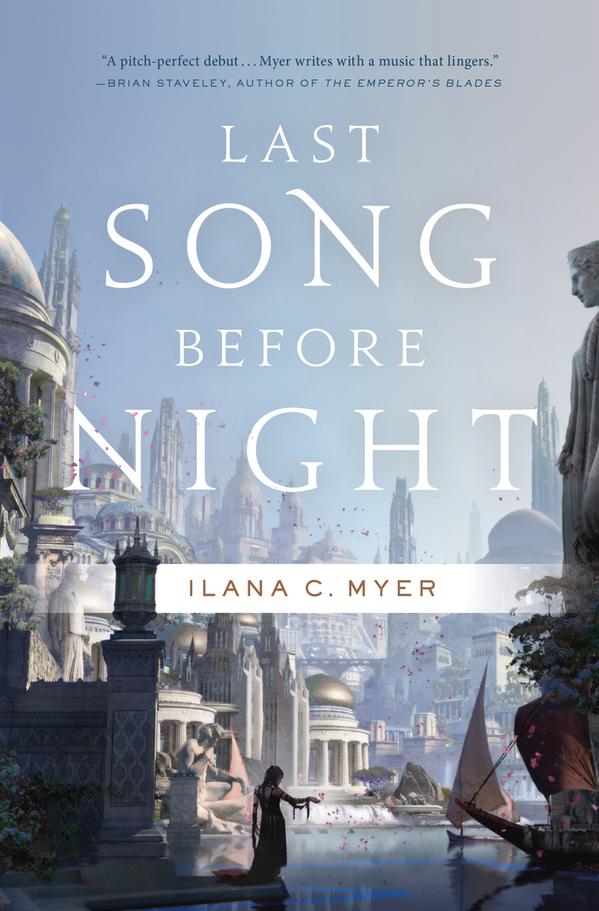 There’s a romantic idea of what writers do which belies the reality for most of us: It’s a grind. It can be exhilirating coming up with new ideas, feeling the flow as a story works its way through you, but these experiences are as rare, random, and to be treasured as the most perfect sunset. Even then, it doesn’t match up with the image many have of writers—fueled by inspiration, the words emerging miraculously.

That is, except for one time, when my experience of writing was that improbable picture-perfect moment. It couldn’t be planned in advance, and I may never recapture its like again.

To set the scene: Late night in Jerusalem in the summer of 2010, during a massive heatwave. It was something like the fourth consecutive day of 105 degrees, and worse yet, it wasn’t cooling off at night—something you can usually rely upon in the desert climate of that city. Like most Jerusalemites, we had no air conditioning. After tossing for hours, I had to admit sleep wasn’t going to happen. The next day at work was shot.

By then it was three in the morning. I took my laptop onto our porch. We lived in a third-floor walkup on a central thoroughfare in Jerusalem called Emek Refaim (which either means “Valley of Healers” or “Valley of Spirits,” depending on whom you ask); our apartment was across from popular cafes and restaurants. Summer nights in Jerusalem are delightfully alive, and even now at three in the morning a few patrons lingered outside the restaurant below, raucous in the silence. What I loved about that porch was being among trees and an enfolding peace, sheltered from the bustle and traffic of Emek Refaim yet still a part of it.

At night, the hills beyond the city became indistinct with mist. I recall a brilliant moon. I settled myself onto one of the overstuffed chairs on our porch—left by a previous tenant—and opened to the revised draft of what was growing into Last Song Before Night. The male protagonist is wandering the capital city in the small hours of morning after the collapse of his world. In that penumbral hour—of the day, of his life—the city is transformed; even the familiar shortcuts are strange to him.

And here I was, in that same surreal space before daybreak, traversing the city of my imagination. At some point the restaurant patrons below vanished, and the silence deepened. My memory cast back to long-ago wanderings through Jerusalem’s Old City just before sunrise: clambering up broken stairs to rooftops that overlook the souk, then down again, to a new maze of streets and alleyways. The sensation of being alone.

I guided my character to the necessary discoveries, the kind that emerge at such times of the night. The night gave them to me. It was as perfect a merging of creation and lived reality as I’ve experienced—nothing else has come close.

Ilana C. Myer has written about books for the Globe and Mail, the Huffington Post, the Los Angeles Review of Books, and Salon. Last Song Before Night is her first novel. She lives in New York City.