For full disclosure, I blurbed Between Two Thorns and said this. “Emma Newman has created a reflection of Bath that reminds one that charming is not safe. Between Two Thorns shows the darkness beneath the glamour of the social Season. Learning to be a young lady has never seemed so dangerous.”

I strongly suspect that you will like this book and today is its release day so it’s easy to pick up a copy and find out if I’m right.

Meanwhile, let’s find out what Emma’s Favorite Bit is.

There’s a song I love with lyrics describing how a man feels about the woman he loves. You get a sense of it being unrequited but how many times have love stories started this way? 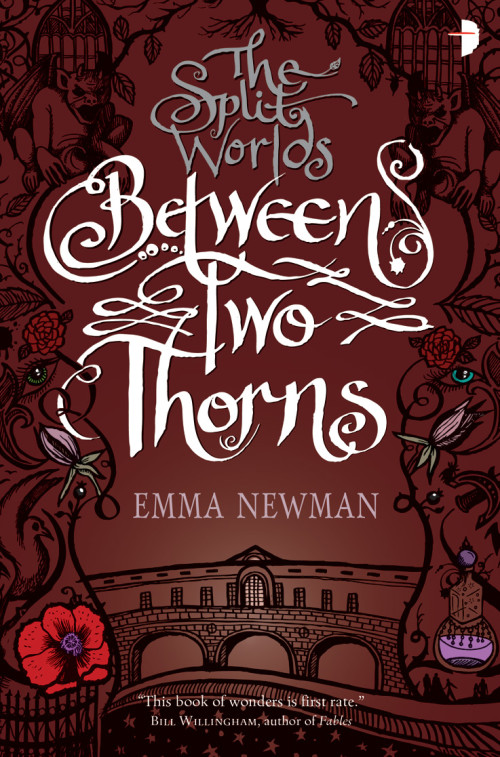 It’s sweet and cheerful. Then the last two lines of the song are about the police dragging him away. You realise – with horror – that you’ve just listened to an obsessive stalker waxing lyrical about the woman he’s targeting. It never stops being bright and upbeat but, just like when you learn someone you love has died on a beautiful summer’s day, there’s no warmth or happiness any more. You’re just left shivering. The song is ‘Lily’ by the Smashing Pumpkins.

But I’m here to talk about my favourite bit in Between Two Thorns!

That bit is a conversation between one of the main characters, Cathy, who was born into a ‘Nether’ family and their immortal Fae patron, Lord Poppy.

The privileged life for a woman in the Nether comes with forced marriage, no right to property and very little say in how she lives her life. It has more in common with Regency England than the modern day but with a critical difference; no-one ages whilst they live there. The same men have been the heads of the Great Families for hundreds of years and there are none of the technological and economic pressures that create social change. Cathy engineers her escape, lives – and ages – just like any young woman in Mundanus until the day she is found again by Lord Poppy.

He’s intrigued as he can’t understand how she’s evaded capture for so long but Cathy knows that if she says the wrong thing he will do the most terrible things to her. Every time she answers a question it’s a gamble; there’s no way to predict how he will react.

“Yes,” she said, throat dry. She couldn’t reveal everything, she’d never tell anyone the real reason she’d fled her family. But she had to give him a sliver to be believable. “I fell in love with Mundanus. I didn’t want to go back and live in the Nether like everyone in the Great Families. I couldn’t bear to leave it. So I ran away and hid from my family so they couldn’t stop me living there.”

Eyebrows high, he sucked in a breath and the hand that had caught hers fluttered over his chest. “Oh! Oh darling child I understand. I know what agony it is to fall in love with something we can never have. And what deserves our love and attention more than Mundanus? Poor, empty world, denied our gifts and beneficence for so long!” He clasped her hand again, this time pressing it over his heart, but she felt no beat through the silk shirt. “Now I understand what a delicious creature of passion you are, it was buried so far beneath an inconsequential face and forgettable body that I almost missed it!”

Whilst her gamble pays off, Cathy has a new problem: Lord Poppy finds her interesting enough to bestow a gift of three wishes upon her. After all, if she can run away and survive in a world without magic and servants, what interesting things could she do with those? Cathy’s no fool; she knows the wishes are more likely to get herself into even more trouble but she can’t refuse. All the while, Cathy has to remain polite and make sure she doesn’t say anything unwise as her freedom and the chance of living the life she struggled so hard to create are being destroyed.

Lord Poppy talks about doing the most awful things in the same way that one might talk about taking someone out for ice-cream. When she makes a comment about being glad he understands why she ran away, thinking the worst of the threat is over, he says;

“As am I! I arrived with a heavy heart, convinced that I was going to have to turn your tongue into a tethered wasp and then enslave you for eternity for having been so disloyal to your family.” He paused as the colour sank away from her lips. “But now I don’t have to, because I understand that it was love that drove you, and how can I deny love? And it really is such a relief, as it would have been so inconvenient, everything has been arranged for so long I was struggling to imagine how I would recover.”

This is why it makes me think of that song; he describes something chilling in a cheerful, upbeat way. And that’s the main reason this is my favourite bit; because the things I find the most frightening are not blood and gore and zombies (though they can be scary). No, the things that are the most horrifying lie beneath a veneer of beauty and don’t appear to be anything other than lovely until it’s far too late.

Emma Newman was born in a tiny coastal village in Cornwall during one of the hottest summers on record and now lives in Somerset, England. She writes dark short stories, post-apocalyptic and urban fantasy novels and records audiobooks in all genres. Her hobbies include dressmaking and gaming and she drinks far too much tea. She blogs at www.enewman.co.uk, rarely gets enough sleep and refuses to eat mushrooms.

1 thought on “My Favorite Bit: Emma Newman talks about BETWEEN TWO THORNS”