Daniel M. Bensen is joining us today with his novel Groom of the Tyrannosaur Queen. Here’s the publisher’s description:

Former soldier Andrea Herrera isn’t happy with where her life’s taken her. Specifically, Hell Creek, Montana, 65 million years before the present. As far as careers go, making sure the dinosaurs don’t eat her paleontologist clients comes in a pretty dismal second choice to serving her country. But when their time machine malfunctions, Andrea and her team are trapped in a timeline that shouldn’t exist with something a hell of a lot more dangerous than terrible lizards: other humans.

Kidnapped by the stone-age descendants of a lost time colony, Andrea finds herself stripped of her technological advantages and forced into a war against the implacable armies of the Slaver Empire. Even worse, the Slavers have captured the time machine and the mission’s one surviving paleontologist, using his futuristic weapons for their own ends.

Andrea’s only hope lies with the ferociously intelligent and violently insane tribal war-leader, Trals Scarback. Armed with his mystic sword, his trained velociraptor, and his herd of war-triceratops, this former slave has the resources and motivation to take on the empire. But can Andrea persuade him to see her as a partner rather than a tool for his ambitions? Only if she beats the barbarian at his own game and becomes the Tyrannosaur Queen. 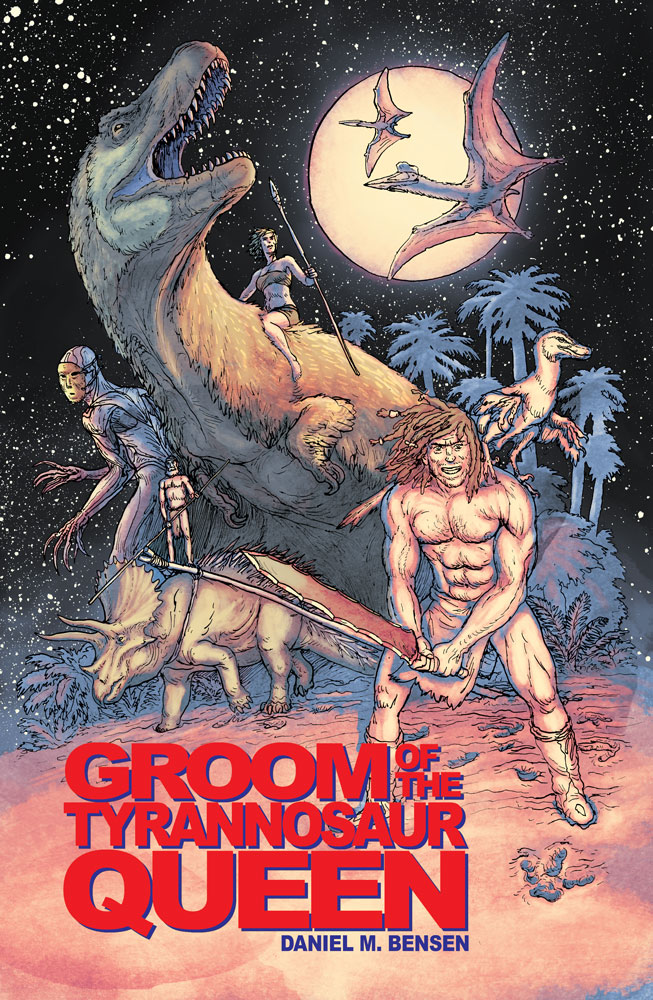 What would it be like to meet a tyrannosaur? That’s the question that everyone who works with dinosaurs wants to answer. What did this animal look like? How did it behave? What sounds did it make? What smells? How did it fit into its landscape? Answering those questions —and a surprising number of those questions do have answers — will give you a picture of an animal.

The speed of the tyrannosaur was shocking, an insult to all sense of physics and decency. The predator executed a turn, still moving faster than a galloping horse. Andrea’s overstressed HUD could only give her a confused blur of sweeping tail, huge bunching thigh muscles under dark feathers, a snapping mouth. Jaws the size of a compact car tore through the prey’s skin and muscle in a waterfall of blood.

The tyrannosaur slowed, stopped, and stalked back to where its injured prey had collapsed. Blood splashed around its feet and the mouth tore downwards. The head lifted, scooping out a chunk of meat about the size of Andrea. It froze, as if posed for a photo. Little black eyes glinted from behind charcoal-colored feathers. Muscles curved in smooth tensegrity lines from the back of the skull to the powerful chest. Meat-hook claws cocked. Barrel ribs shifted as the lungs inflated. Bloody jaws clenched. The little bird eyes squeezed shut, and the tyrannosaur swallowed its mouthful.

“Holy shit,” said Andrea again. “You people know how to ride those things?”

“So the legends claim,” Trals grinned at her. “Let us find out if they are true.”

Groom of the Tyrannosaur Queen started out as a series of encounters between people and dinosaurs. Some of them were from the perspective of a modern person: a time-traveler. Someone like the characters in L. Sprague de Camp’s “A Gun for Dinosaur.” Others were more like James Gurney’s Dinotopia: pre-industrial human cultures that had grown up around dinosaurs. Realizing I could have both was the kick that gotGroom of the Tyrannosaur Queen up and running.

So I set to work on a story about a group of paleontologists and their bodyguard making a wrong turn in their time-machine and stumbling across a lost time-colony of stone-age humans. And, since I had just listened to the Writing Excuses episode about the Three Act Structure, I set up the beats in my outline based on how these people dealt with the creatures they found. A legion of soldiers driving a baggage train of triceratops. A particle cannon vaporizing a charging nodosaur. A kidnapper using a velociraptor to hunt down a runaway. Riding a tyrannosaur.

Those are the best bits. The dinosaurs. They’re smelly, they’re enormous, they’re just barely under control. Sometimes all the human characters can do is to hold on and enjoy the ride.

Daniel M Bensen is a father, English teacher, and author. He lives in Sofia, Bulgaria.

2 thoughts on “My Favorite Bit: Daniel M. Bensen talks about GROOM OF THE TYRANNOSAUR QUEEN”