Jennifer Brozek is joining us today with her omnibus Never Let Me. Here’s the publisher’s description:

What would you do if you discovered that everyone, in your house, on your street and in your town was dead? Then you discovered you weren’t alone–and whatever was out there was hunting you?

Melissa Allen, a troubled teen under house arrest, is the only person left alive in South Dakota. After discovering the mysterious deaths of her guardians and hearing of the massacre on the news, she realizes that there are monsters out there. They are pretending to be human, and they’ve have begun a door-to-door search–for her.

Melissa is unable to leave the quarantine zone and has no help except for Homeland Security agent David Hood on the phone. Before the government takes drastic action, she must figure out what killed everyone and stop it from happening again.

…or did Melissa herself, in a psychotic fit, murder her guardians–and the rest of the apocalypse is only happening inside her mind?

Never Let Me takes you head first in to Melissa’s troubled, paranoid world – and it will never leave you alone. 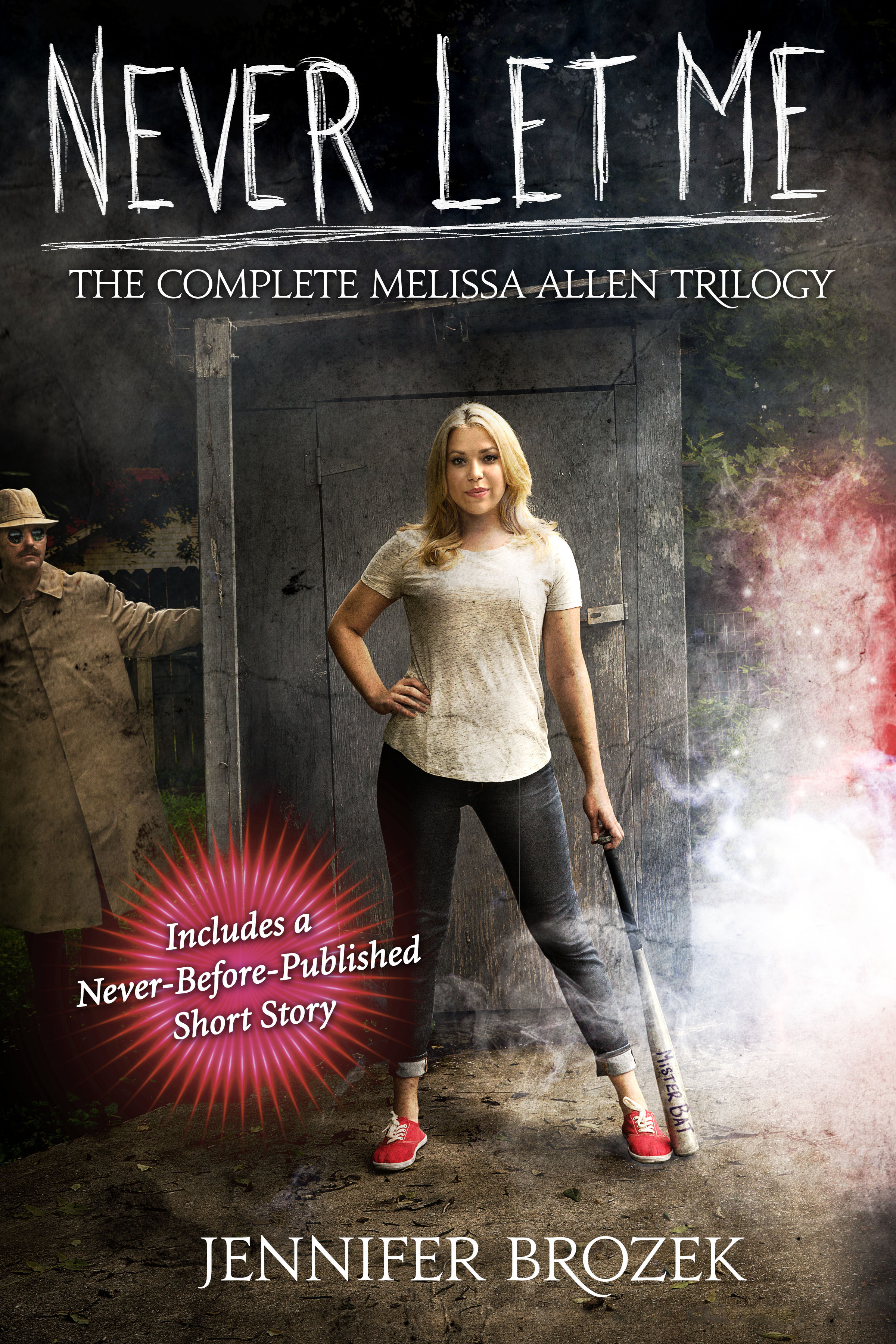 In the first book, Never Let Me Sleep, she is on her own in a town filled with everyone she’s ever known dead of mysterious causes but she’s not alone and what’s out there is hunting her. Locked in a quarantine zone with only a Homeland Defense agent on the phone to help her, Melissa has to solve the mystery while being hunted before the government takes matters in hand to an extreme and lethal end with Melissa as collateral damage.

Melissa is a troubled teen who questions her sanity on a regular basis—with good reason. She is bipolar, schizophrenic, and prone to hallucinations under stress. She was also under house arrest at the time of this apocalypse. She is a teenager who hasn’t been allowed to take care of herself or take responsibility for things around her. Now, not only must she take responsibility for her actions, the rest of the world is depending on her to do so.

My favorite bit comes about halfway through the first novel. It is the point that Melissa mentally shifts from someone who just reacts to one who acts and chooses to act. She has been attacked multiple times, been told what she needs to do to save everyone—including herself—and is on her way to do just that. She’s walking down the main hall of the local high school and she catches sight of herself reflected in the trophy case.

… I saw my reflection in the trophy case at the end of the hall. In the dim light, I looked bad ass. Dirty clothes, a bat in one hand, a bent butcher knife in the other, and a determined walk. I stopped and looked at myself. I realized something: I no longer wanted to be rescued, no longer felt like I needed to be rescued. Yes, I was scared, but I wanted to rescue myself and to do what needed doing.

It was a marvelous sensation. …

The image of Melissa, bloody and determined, making the conscious shift to taking control and giving herself agency, makes me happy. It’s a mental shift that she continues throughout the rest of the series. In the second book, Never Let Me Leave, she extends taking responsibility to protecting other teens like her. In the third, Never Let Me Die, it morphs from more than a duty into caring for her chosen family.

Melissa’s acceptance of her own agency will always be my favorite bit.

Jennifer Brozek is a Hugo Award-nominated editor and an award-winning author. Winner of the Australian Shadows Award for best edited publication, Jennifer has edited fourteen anthologies with more on the way, including the acclaimed Chicks Dig Gaming and Shattered Shields anthologies. Author of Apocalypse Girl Dreaming, Industry Talk, the Karen Wilson Chronicles, and the Melissa Allen series, she has more than sixty published short stories, and is the Creative Director of Apocalypse Ink Productions.

Jennifer is a freelance author for numerous RPG companies. Winner of the Scribe, Origins, and ENnie awards, her contributions to RPG sourcebooks include Dragonlance, Colonial Gothic, Shadowrun, Serenity, Savage Worlds, and White Wolf SAS. Jennifer is the author of the YA Battletech novel, The Nellus Academy Incident, and the Shadowrun novella, Doc Wagon 19. She has also written for the AAA MMO Aion and the award winning videogame, Shadowrun Returns.

When she is not writing her heart out, she is gallivanting around the Pacific Northwest in its wonderfully mercurial weather. Jennifer is a Director-at-Large of SFWA, and an active member HWA and IAMTW.