Dan Moren is joining us today to talk about his upcoming novel The Bayern Agenda. Here’s the publisher’s description:

Simon Kovalic, top intelligence operative for the Commonwealth of Independent Systems, is on the frontline of the burgeoning Cold War with the aggressive Illyrican Empire. He barely escapes his latest mission with a broken arm, and vital intel which points to the Empire cozying up to the Bayern Corporation: a planet-sized bank. There’s no time to waste, but with Kovalic out of action, his undercover team is handed over to his ex-wife, Lt Commander Natalie Taylor. When Kovalic’s boss is tipped off that the Imperium are ready and waiting, it’s up to the wounded spy to rescue his team and complete the mission before they’re all caught and executed. 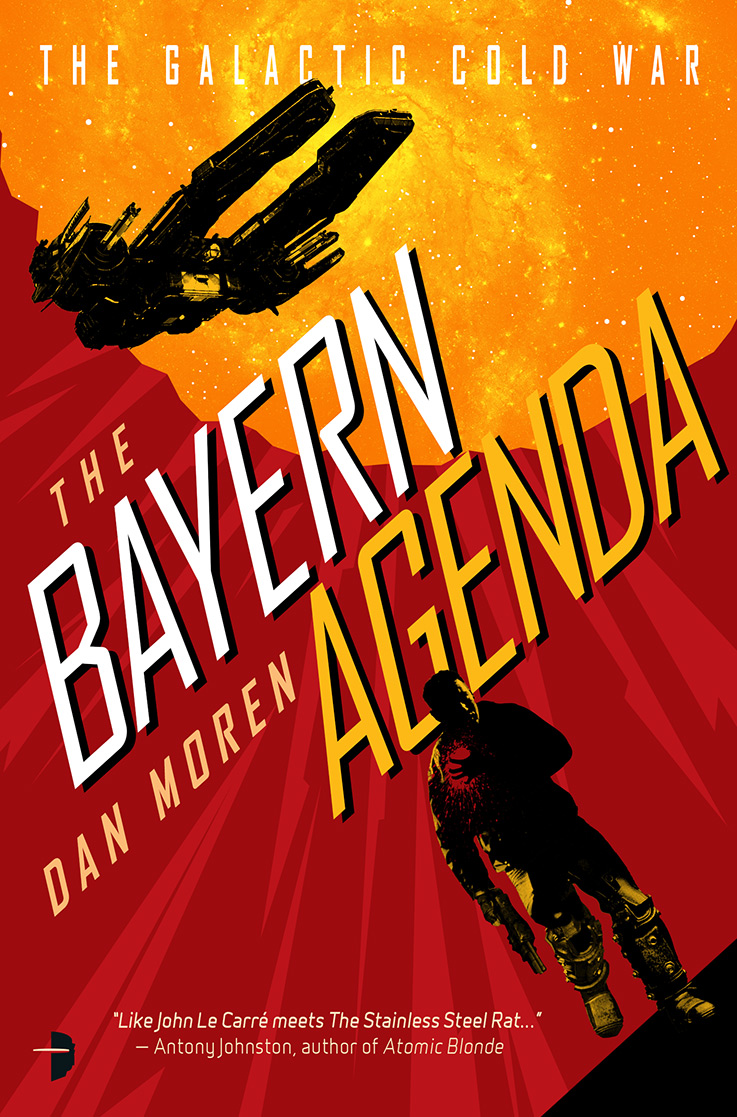 Ask any writer: beginnings and endings are easy. At the beginning of a story, everything’s fresh and new, brimming with potential and passion. Likewise, the end is often a roller coaster plunge as you tie together all the threads you’ve been laying for the story, wrapping it up in a hopefully satisfying conclusion.

Middles, though…middles are tough. That’s where the hard work happens, the careful intertwining of those threads you laid out in the beginning as they progress towards that inevitable end. (If you’ve ever watched The Great British Bake-Off and seen somebody mess up braiding a loaf of bread, you’ll appreciate the challenge of weaving all your plot points and character arcs into an attractive whole.)

So it’s as much a surprise to me as to anyone that my favorite bit of my latest novel, the sci-fi spy adventure The Bayern Agenda, is right smack in the middle of the book.

While on a mission on the planet Bayern, accidental Commonwealth agent Eli Brody has found himself roped into attending a black-tie soirée at the embassy of the Illyrican Empire, the Commonwealth’s rival superpower—and, as it happens, the very government that he himself deserted some six months prior.

My love for this whole sequence runs deep. Embassies are, of course, a staple of espionage stories, because they provide a space that is tantalizingly liminal in a number of ways. First, physically: you’re in the domain of the enemy, even though that domain is itself on foreign ground. Then, emotionally: this kind of professional environment requires a veneer of civility between rivals, of conflict blurred into fake camaraderie. Or is it real camaraderie? After all, the foot soldiers of a galactic conflict may have more in common with one another than with those calling the shots. Finally, politically. There’s a dichotomy of the overt and the covert at play here: an embassy is ostensibly all about diplomacy and good relations, even as hidden agendas lurk beneath. In short, it’s a setting ripe for subtext and tension.

Plus, of course, it’s dangerous.

Especially for Eli, a novice spy who’s been forced to learn the dos-and-don’ts of espionage in a hurry. Who can he trust? Is that pleasant civil servant he meets really all that he seems? What happens when the mission he’s been sent on takes a sudden and dire left turn? Throw in Eli’s fraught relationship with the Illyricans—who will not hesitate to arrest and perhaps even execute him if they discover who he really is—and it makes for (I hope) a tense scene that gets readers’ blood pumping.

As a writer, I have fond memories of putting this scene together, because I found myself rejoicing in the time-honored tradition of dunking your character deeper and deeper into hot water. Needless to say, Eli Brody’s situation gets only more dire as the lavish party progresses. Then, just when you think he’s in as deep as he can get, he makes a truly inspired—and truly ridiculous—choice: the kind of move that only an amateur spy would think is a good idea, since it leaves him with that hot water firmly over his head. And, as a bonus, it’s the kind of thing that makes even a reserved writer cackle in glee as everything clicks into place.

All in all, it makes for the kind of high-stakes cocktail party that you won’t soon forget.

Dan Moren is the author of the sci-fi espionage thrillers The Bayern Agenda and The Caledonian Gambit. By day, he works as a freelance writer, hosts technology podcasts Clockwise and The Rebound, and talks pop culture on The Incomparable podcast network. By night, he fights crime while dressed as a bat. He could use some sleep.

1 thought on “My Favorite Bit: Dan Moren talks about THE BAYERN AGENDA”