For full disclosure, I blurbed this book and loved it. It feeds all of my historical fantasy jollies, as well as being an interesting detective story. What’s particularly great about D.B. Jackson, which his bio doesn’t say, is that he’s a history professor. The man knows his stuff and in this case, his stuff is pre-Revolutionary war Boston.

And now, let’s see what his favorite bit is. 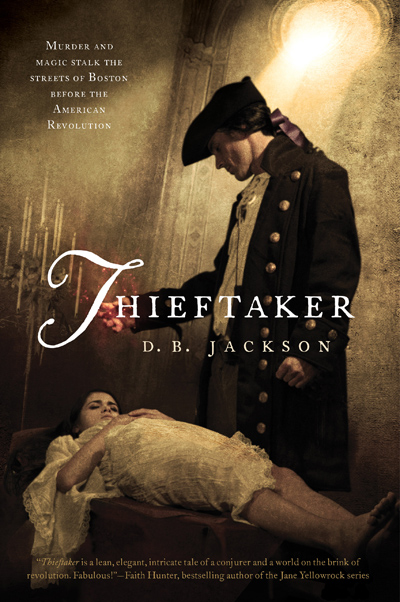 I like weaving together multiple plot strands, creating braids of narrative that carry my reader toward culminating scenes that they can anticipate but not fully predict.

I enjoy worldbuilding, taking a setting and making it come alive to the senses so that it is as rich and tactile as any “real” place my readers might know.

But most of all, I love to create characters whose triumphs and failings touch my readers’ emotions.

So, perhaps it’s predictable that my favorite bits in all my books involve those emotional payoff moments when all the terrible, mean, duplicitous, delicious things I do to my heros and heroines finally become too much for the poor souls to bear. Caught in that moment when they must buckle or find strengths they didn’t know they possessed, they act, for better or worse.

And in the aftermath, if I’ve done my job correctly, they have prevailed, but they have lost something that they can never regain. Invariably, these are the most powerful moments in my novels. And if as I write them, even my throat feels thick, even my eyes sting, I know that I’ve nailed the scene.

There is (at least) one such moment in my latest book, Thieftaker, a historical urban fantasy, which comes out today, July 3! My hero, Ethan Kaille, who is a thieftaker and conjurer in Colonial Boston, does battle with a mysterious spellcrafter who is determined that Ethan should cease his inquiry into the murder of a young woman, the daughter of a wealthy family. Ethan is on the verge of being beaten, his own conjuring powers overmastered by those of his enemy. What is worse, an innocent young man, the son of a woman Ethan once intended to marry, is doomed to die at the hands of this conjurer if Ethan fails.

But at the last moment, Ethan has one last opportunity to defeat the conjurer (at least for the moment), make his escape, and save the boy as well. The catch is that he must do something truly horrible — nearly as reprehensible in his own mind as anything the conjurer has done. He makes his choice, saving his own life and that of the boy.

But in the scenes that immediately follow he is wracked with grief at the choice he has been forced to make, and in the most painful of those scenes, he forces himself to confess to the woman he loves exactly what he’s done. And though I have read that scene again and again while revising the book, while copyediting it, while proofing it, I cannot get past the moment without choking up. I have had beta readers tell me that the scene reduced them to puddles, which, of course, I love to hear.

For me, a novel’s success or failure turns on character. If through my protagonist I can grab hold of my readers’ hearts, if I can make them grieve and fear and ultimately rejoice as he does, then I’ve succeeded as a storyteller. With this moment in Thieftaker, when Ethan’s pain is as visceral to my readers as any emotion of their own, I’ve done just that. Which is why it’s my Favorite Bit.

BIO:
D.B. Jackson is also David B. Coe, the award-winning author of a dozen fantasy novels. His first book as D.B. Jackson, volume I of the Thieftaker Chronicles, will be released by Tor Books on July 3. D.B. lives on the Cumberland Plateau with his wife and two teenaged daughters. They’re all smarter and prettier than he is, but they keep him around because he makes a mean vegetarian fajita. When he’s not writing he likes to hike, play guitar, and stalk the perfect image with his camera.

2 thoughts on “My Favorite Bit: D.B. Jackson talks about Thieftaker”