D.B. Jackson is joining us today with his novel A Plunder of Souls. Here’s the publisher’s description.

Boston, 1769: Ethan Kaille, a Boston thieftaker who uses his conjuring to catch criminals, has snared villains and defeated magic that would have daunted a lesser man. What starts out as a mysterious phenomenon that has local ministers confused becomes something far more serious.

A ruthless, extremely powerful conjurer seeks to wake the souls of the dead to wreak a terrible revenge on all who oppose him. Kaille’s minister friends have been helpless to stop crimes against their church. Graves have been desecrated in a bizarre, ritualistic way. Equally disturbing are reports of recently deceased citizens of Boston reappearing as grotesquely disfigured shades, seemingly having been disturbed from their eternal rest, and now frightening those who had been nearest to them in life. But most personally troubling to Kaille is a terrible waning of his ability to conjure. He knows all these are related…but how?

When Ethan discovers the source of this trouble, he realizes that his conjure powers and those of his friends will not be enough to stop a madman from becoming all-powerful. But somehow, using his wits, his powers, and every other resource he can muster, Ethan must thwart the monster’s terrible plan and restore the restless souls of the dead to the peace of the grave. Let the battle for souls begin in Plunder of Souls, the third, stand-alone novel in Jackson’s acclaimed Thieftaker series. 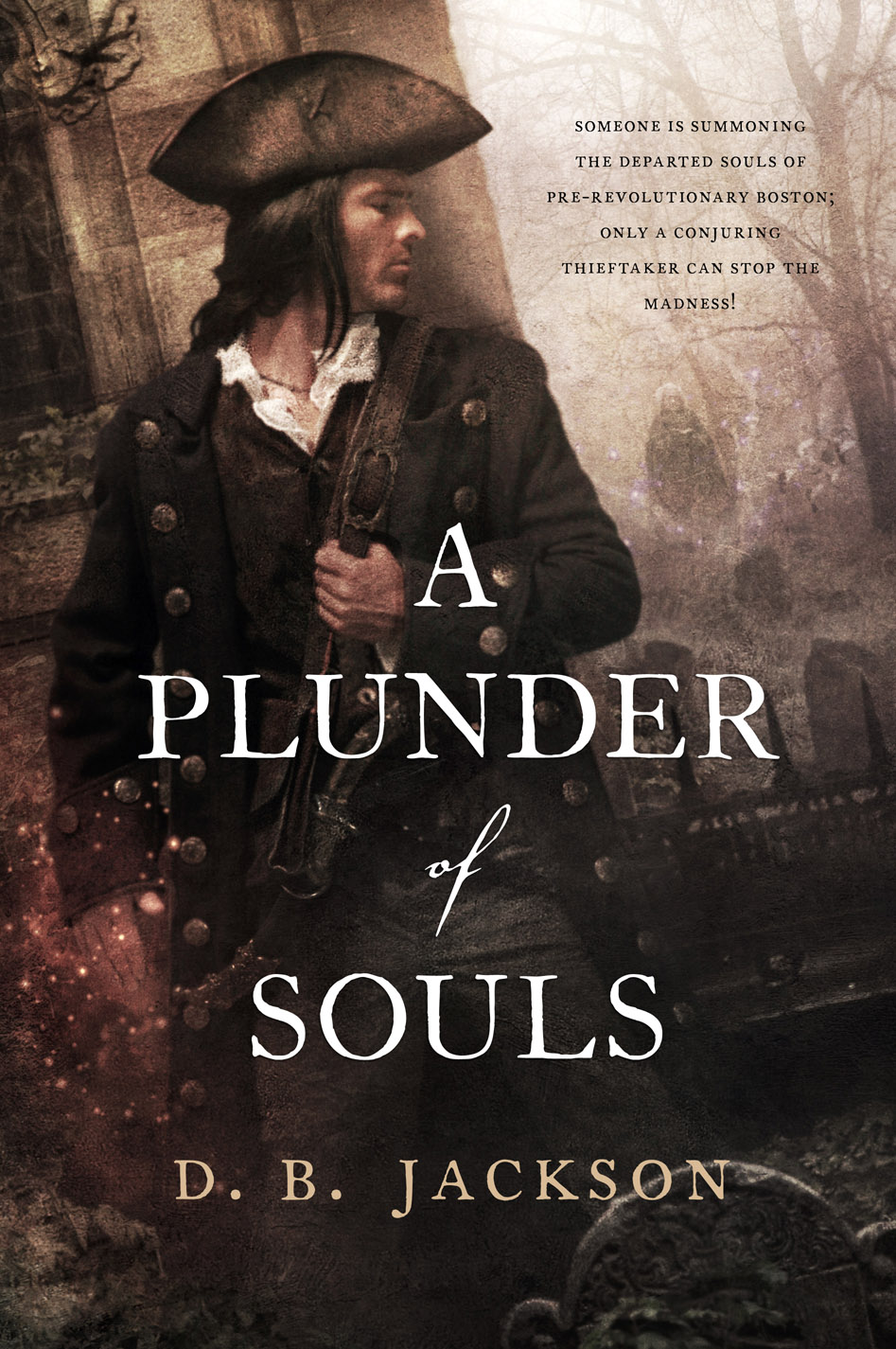 Today is release day for A Plunder of Souls, the third novel in my Thieftaker Chronicles, a historical urban fantasy set in pre-Revolutionary Boston. It also marks the third release day in as many years that I have appeared here as a guest of Mary’s on “My Favorite Bit.” I’m deeply grateful to her for hosting me again.

As with previous Thieftaker books, I am most fond of the character relationships I have set up in A Plunder of Souls. In other ways, though, this novel differed in significant ways from its prequels and presented me with both special challenges and special opportunities. The book has its roots in a short story I published at Tor.com two years ago, just before the release of the first book in the series, Thieftaker. The story is called “A Spell of Vengeance,” and in it I introduce a character named Nate Ramsey.

I originally wrote the story intending merely to explore an episode from my hero’s past, one to which I refer briefly in that first book. But long after I finished “A Spell of Vengeance,” I continued to think about Ramsey and his interactions with Ethan Kaille, my conjuring, thieftaking protagonist. Eventually I realized that I wanted to bring Ramsey back, to make him a more integral part of the series, a sort of Moriarty character who would task Ethan in ways even Sephira Pryce, Ethan’s nemesis and rival in thieftaking, could not.

Like Ethan, Nate Ramsey is a powerful conjurer. He is also the captain of a merchant ship, as was his father before him. When first we meet him in the short story, he has been making threats against two wealthy merchants in Boston who hire Ethan to protect them. During their initial encounter, Ramsey informs Ethan that the two men swindled and hounded his father until the elder Ramsey took his own life. Naturally, Ethan regrets taking the job, but he feels honor-bound by the commitment he has made to the merchants. He attempts to convince Ramsey that he should leave the city without exacting his revenge. Eventually however, Ethan and Ramsey engage in a battle of spells that ends in a stalemate. Ramsey manages to kill the two merchants and then flees Boston.

Now, in A Plunder of Souls, Ramsey is back, and he seeks to avenge himself on Ethan. Some of my readers will have read “A Spell of Vengeance,” and they will know all of this history. But for the rest I need to reintroduce Ramsey in a way that conveys the sum of his past encounter with Ethan and establishes in no uncertain terms the threat he represents and the essence of who he is: a brilliant, twisted, broken man with staggering magical powers.

I do this in a scene aboard Ramsey’s ship, the Muirenn. At first, the captain greets Ethan as if they’re old friends, embracing him and insisting that they share a flask of Madeira wine. Ethan, of course, is perplexed by this and goes so far as to remind Ramsey of the circumstances of their last encounter. Until at last the captain says, “Leave it, Kaille. Friends, enemies. There aren’t that many people in this world who inspire passion in me one way or another. So stop arguin’ and drink with me.”

Their confrontation goes downhill from there, the tension between them building, their words as barbed as fish hooks. The scene was tremendous fun to write and is a highlight of the book. But more to the point, the encounter ends on what may be the best snippet of conversation I’ve ever written. In one line, Ramsey reveals all about himself: his madness, his cruelty, his unnerving sense of humor, and his brazen determination to destroy Ethan utterly and for all time.

I’ll not give away the line here; I think you’ll know it when you see it. I will simply say that this single moment establishes his character as fully as if I had reprinted the entire short story in the novel. And that is why it is My Favorite Bit.

D.B. Jackson is also David B. Coe, the award-winning author of more than a dozen fantasy novels. His first two books as D.B. Jackson, the Revolutionary War era urban fantasies, Thieftaker and Thieves’ Quarry, volumes I and II of the Thieftaker Chronicles, are both available from Tor Books in hardcover and paperback. The third volume, A Plunder of Souls, has just been released in hardcover. The fourth Thieftaker novel, Dead Man’s Reach, is in production and will be out in the summer of 2015. D.B. lives on the Cumberland Plateau with his wife and two teenaged daughters. They’re all smarter and prettier than he is, but they keep him around because he makes a mean vegetarian fajita. When he’s not writing he likes to hike, play guitar, and stalk the perfect image with his camera.

2 thoughts on “My Favorite Bit: D.B. Jackson talks about A PLUNDER OF SOULS”