Chris F. Holm is joining us today with his novel The Big Reap. Here’s the publisher’s description.

Who Collects the Collectors?

Sam Thornton has had many run-ins with his celestial masters, but he’s always been sure of his own actions. However, when he’s tasked with dispatching the mythical Brethren – a group of former Collectors who have cast off their ties to Hell – is he still working on the side of right? 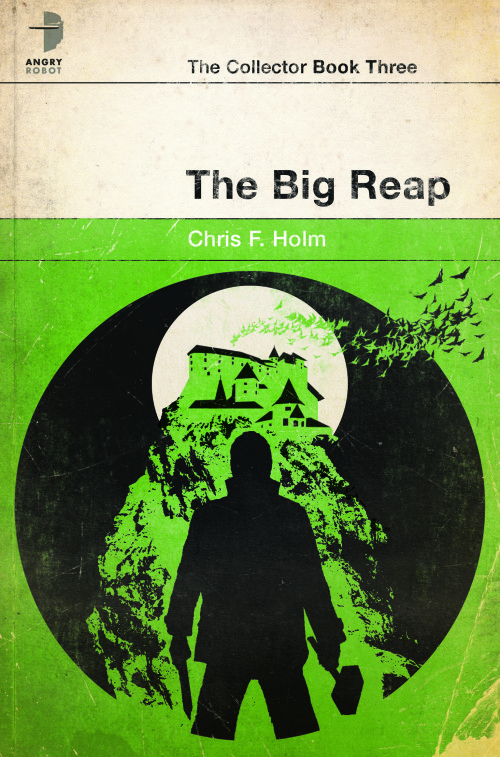 With apologies to Mary, I have a confession to make: I’ve no intention of talking about my favorite bit of THE BIG REAP today. You see, THE BIG REAP is the conclusion of my (first) Collector trilogy, and if I were to tell you about the bit I liked the best – the scene that broke my heart to write – I’d be spoiling something I’ve been building toward for three books. So instead, if you’ll forgive my impertinence, I offer up My Second Favorite Bit.

Each of my Collector novels has its own flavor. DEAD HARVEST blended fantasy with classic crime pulp in the vein of Chandler and Hammett. THE WRONG GOODBYE folded in a healthy dose of Lovecraft and a dash of buddy comedy. For THE BIG REAP, I wanted to pay homage to the horror movies that warped my childhood – from stone classics like Dracula and Frankenstein, to the cheesy B-movies whose schlock was lost on poor, credulous pre-teen me.

One such schlockfest was Poltergeist 2. Though largely dismissed as a tacky cash-in on the original’s critical and commercial success, this movie lodged itself in my psyche on the strength of a horrifying scene in which Craig T. Nelson ingests a demonic tequila worm.

Yes, I know how silly that sounds. And truth be told, I never thought it would find its way into my fiction. But when I needed my protagonist to get from point A to point B on the quick, a funny thought occurred to me: I should send him through a wormhole. So I wrote Sam his own bottle, his own noxious beverage, his own worm. He’s understandably reluctant to drink it:

“Don’t be ridiculous,” said Lilith. “It’s only half of one. The mouth-bearing half, to be precise. The, uh, bottom half is somewhere else. Once you consume it, it will, well, cause you to generate a sac of sorts, much like the one you see at your feet. Its other half will do the same. Within the cocoon, the worm will feed on you, causing your vessel to be digested. Fear not, it derives no sustenance from your meat; what it gleans its energy from is the molecular resonance which anchors you to this particular plane of existence. The creature itself exists across many planes at once, which is why it can be split in two without injury. Once it’s done with you, you will pass, reassembled, like so much refuse from its system. This worm was long used whole to facilitate astral projection, for in its normal feeding cycle, the victim would simply experience wild hallucinations only to awaken precisely where they were they began. But a few dark mages realized its potential for physical transport as well.”

But, as his enemies bear down on him and his options for egress dwindle, Sam’s left with no choice:

I uncorked the bottle. Watched the grub-looking worm thingy wriggle toward the surface, its front end opening into a four-pointed star of a mouth, exposing a pink interior ringed all around with tiny teeth. Got dizzy from the sight, and from the tincture’s noxious fumes.

And then, eyes closed, I drank.

For a moment, nothing happens – but then the half-worm sinks its teeth into Sam’s stomach lining, and his pores begin secreting a resinous brown goo that hardens as it hits the air. The pain as it engulfs him is excruciating – at least until the world around him drops away:

Suddenly, a vast bluish plane unfolded all around me, dotted with a billion billion points of light. Souls, I realized or was told or always knew: all that are, or were, or ever will be. The whole of human existence, laid out across a thin skein of light. I zoomed backward from it – weightless, bodiless – and that wisp-thin plane became but one whorl in the vast fingerprint of all existence, a single undulating tree-ring in the cross-section of the universe. The other planes were red and green and purple and black and a thousand other colors not yet imagined, or perhaps impossible for our own eyes to discern. And between those planes swam flew floated massive beasts like whales like sharks like snakes like oh my God like giant worms and I was in one I was one I am one I will forever be one and then, as quick as it began, I felt a pain in my stomach that reminded me I had a stomach I felt a tingle in my limbs that reminded me I had limbs I felt an awful burning in my sinuses that reminded me how godawful that rotting worm sac smelled and then I was tumbling twisting falling naked in a slick of amniotic fluid toward a filthy flop-house mattress a massive ruptured cocoon hanging above me and it was cold and damp and dark a basement I thought or a storeroom or a warehouse empty and abandoned and still I fell as if forever but not forever merely seconds and somewhere nearby or faraway both trumpet-loud and whisper-soft a phone was ringing ringing ringing in the dark.

Thusly is Sam transported from the wilds of Romania to a dingy basement some five thousand miles away. I was delighted an unlikely inspiration allowed me to turn this necessary bit of table-setting into something strange and wondrous in its own right. Oh, and any Herbert fans reading this might be amused to know the mage who concocted the “potent mélange of wormwood and peyote, psilocybin and belladonna, all steeped in pure grain alcohol” in which the worm resides is named Shaddam. Because, c’mon, how can you write a scene involving a worm and traversing space-time without a nod to DUNE?

Chris F. Holm’s Collector novels recast the battle between heaven and hell as Golden Era crime pulp. The third book in the series, THE BIG REAP, is available July 30 in the US, and August 1 worldwide. He lives on the coast of Maine with his lovely wife and a noisy, noisy cat.

4 thoughts on “My Favorite Bit: Chris F. Holm talks about THE BIG REAP”