Catherynne M. Valente is here today with her novel Space Opera. Here is the publisher’s description:

A century ago, the Sentience Wars tore the galaxy apart and nearly ended the entire concept of intelligent space-faring life. In the aftermath, a curious tradition was invented—something to cheer up everyone who was left and bring the shattered worlds together in the spirit of peace, unity, and understanding.

Once every cycle, the great galactic civilizations gather for the Metagalactic Grand Prix—part gladiatorial contest, part beauty pageant, part concert extravaganza, and part continuation of the wars of the past. Species far and wide compete in feats of song, dance and/or whatever facsimile of these can be performed by various creatures who may or may not possess, in the traditional sense, feet, mouths, larynxes, or faces. And if a new species should wish to be counted among the high and the mighty, if a new planet has produced some savage group of animals, machines, or algae that claim to be, against all odds, sentient?

Well, then they will have to compete. And if they fail? Sudden extermination for their entire species.

This year, though, humankind has discovered the enormous universe. And while they expected to discover a grand drama of diplomacy, gunships, wormholes, and stoic councils of aliens, they have instead found glitter, lipstick, and electric guitars. Mankind will not get to fight for its destiny—they must sing.

Decibel Jones and the Absolute Zeroes have been chosen to represent their planet on the greatest stage in the galaxy. And the fate of Earth lies in their ability to rock 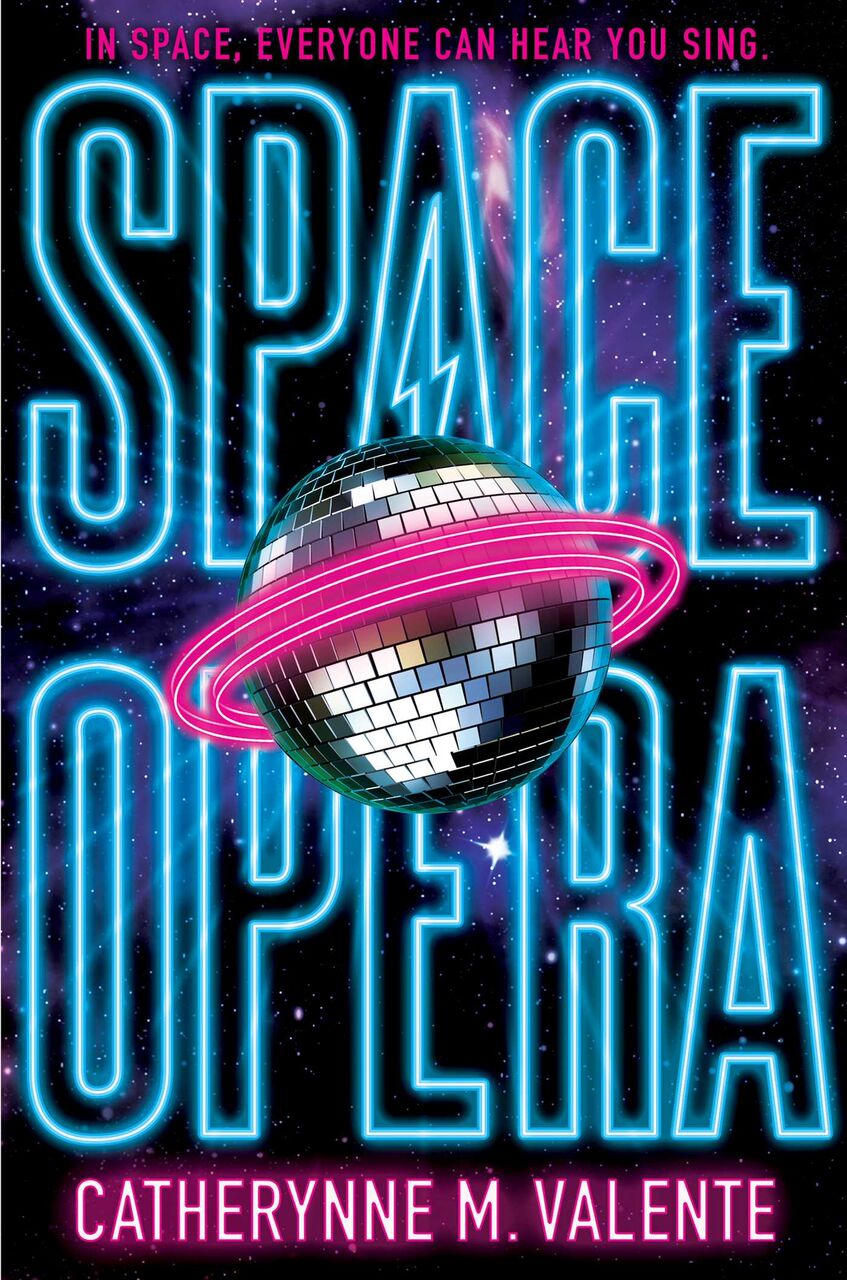 It was so hard to pick a bit for this piece! Space Opera was so much fun to write, so far out of my comfort zone that I was constantly on my toes and dancing on the edge of disaster or awesomeness, (and I rarely knew which), that most of the bits are my favorite bits. I got to write about all the parts of Eurovision that I love, mushed together with all the alien species I could think of and a few more on top of that, along with poking a bit of fun at a lot of tropes in alien invasion and military SF and wrap it all up in my love of pop music and glam rock. Choosing one part out of everything I got to do in one relatively short book is torture!

But there’s this one part near the beginning of the third act. I hadn’t planned it this way. It was one of those things that pops into your head and you think: “Uh oh. This is either the funniest thing I’ve ever written or incredibly, deeply stupid.”

Our heroes, two members of the former chart-topping band Decibel Jones and the Absolute Zeroes, have made it all the way across the known galaxy to a tiny planet called Litost, where they will have to compete musically in the Metagalactic Grand Prix in order to prove that humanity is, despite all appearances, sentient and worthy of not being blown up in order to protect the rest of spacefaring civilization from our worse instincts. But before the big performance, they have to make it through the universe’s most dangerous meet-and-greet, in which almost every representative of every species is trying to undermine and/or possibly assassinate everyone else with a smile on their faces and a cocktail in their hands or various other appendages.

A species of intelligent computer programs called the 321 takes corporeal form every year into order to rock out at the Grand Prix, and this year decided to scan Earth’s archives for a physical representation of cooperative, harmless, friendly technology. Something that won’t freak out the newbies, something that will make them feel comfortable and at home and positively disposed toward a civilization very unlike the many other organic creatures milling and swilling around Litost. And they found something. Something so subservient and cheerful and helpful that it could never make anyone feel the least bit afraid or nervous or even irritated.

So I got to write an extended bar fight scene which includes a seven-foot tall shimmering silver googly-eyed version of Clippy the Word Processing Assistant yelling about galactic domination and bellowing at our hapless humans that they look like they’re trying to get themselves killed and would they like some help with that, while red pandas, zombies, living mountains, and telepathic sea squirts wreck the place all around them. It’s completely absurd and completely delightful, and I’m absurdly delighted with it. It is one of the funniest things I’ve ever written, and it is incredibly, deeply stupid, and I’m not sorry about either.

Coming up with about a hundred alien rock band and interstellar pop song names was pretty great, too. I finally justified the number of times I’ve said “New band name!” in conversation.

Catherynne M. Valente is the acclaimed author of The Glass Town Game, and a New York Times bestselling author of fantasy and science fiction novels, short stories, and poetry. She has been nominated for the Hugo, Nebula, and World Fantasy awards, and has won the Locus and Andre Norton award. She lives on a small island off the coast of Maine with her partner, two dogs, one enormous cat, a less enormous cat, six chickens, a red accordion, an uncompleted master’s degree, a roomful of yarn, a spinning wheel with ulterior motives, a cupboard of jam and pickles, a bookshelf full of folktales, an industrial torch, and an Oxford English Dictionary. Visit her at CatherynneMValente.com.