R J Theodore is joining us today to talk about her novel Flotsam. Here’s the publisher’s description:

Captain Talis just wants to keep her airship crew from starving, and maybe scrape up enough cash for some badly needed repairs. When an anonymous client offers a small fortune to root through a pile of atmospheric wreckage, it seems like an easy payday. The job yields an ancient ring, a forbidden secret, and a host of deadly enemies.

Now on the run from cultists with powerful allies, Talis needs to unload the ring as quickly as possible. Her desperate search for a buyer and the fallout from her discovery leads to a planetary battle between a secret society, alien forces, and even the gods themselves. 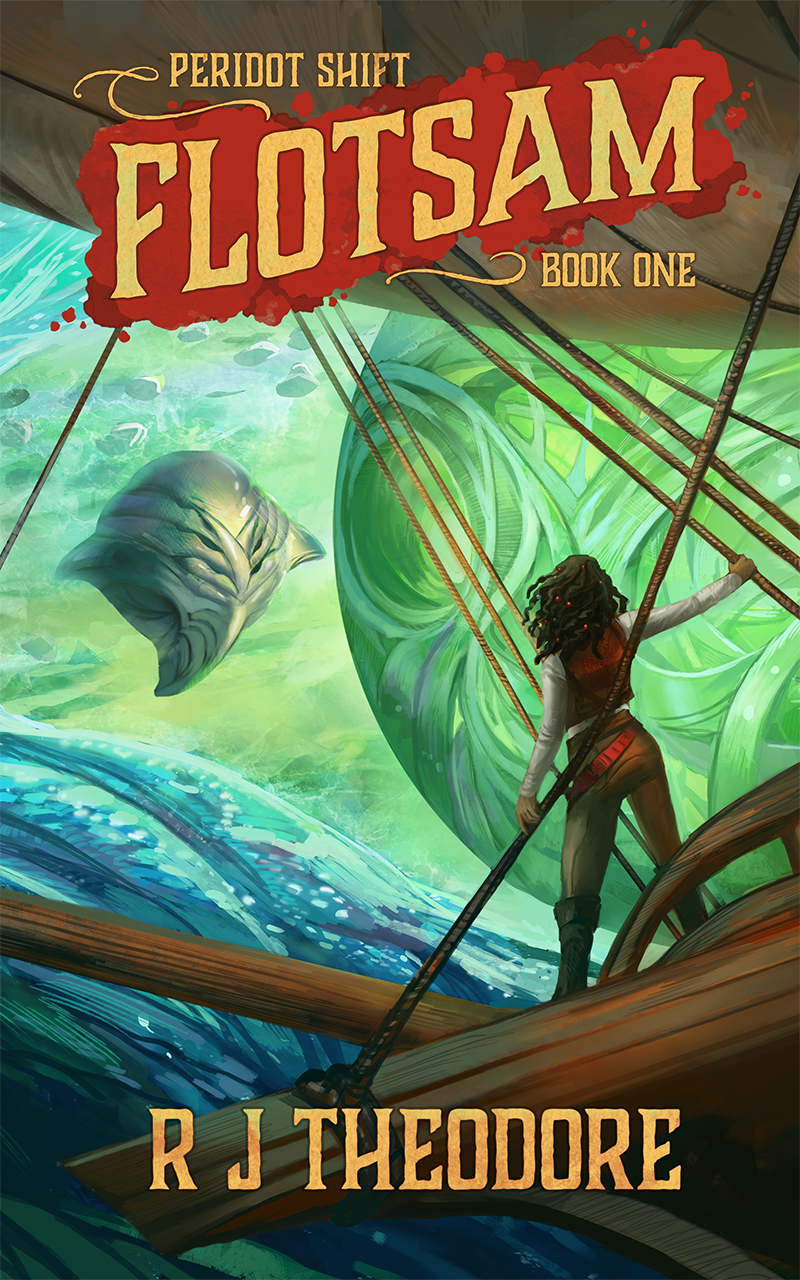 The writing process is full of pitfalls. Even after writers get a handle on structure and characterization and themes (and and and), there are other hidden traps to fall into. Becoming as surefooted as a sailor on an unforgiving sea is part of the process. But the lessons come with pain, and the topics aren’t all as objective as grammar and spelling.

In writing my first novel, FLOTSAM, I learned not to back down. That there’s enough fiction out there for heteronormative white dudes and in wanting to tell my story and get other people to love it, I am willing to sacrifice the classic genre audience if I am going to reach the people I want to connect with.

White males have dominated the genre, even if they don’t dominate the audience. There’s been an acceptable level of James Bond-esque machismo to Science Fiction and Fantasy and even in 2018, when we all know the world is broader, bigger, and better with many voices and perspectives, writers of commercial genre fiction tend to weave the truths of non-white, non-binary, non-male characters in between that traditional view of the world. To bury representation so it can’t be seen unless someone wants to. When an author steps out of line (GSM representation in Chuck Wendig’s Star Wars Aftermath trilogy comes to mind), they open themselves to a flood of unfiltered animosity and toxic masculinity. It could break a person. It could ruin a career.

We shouldn’t have to sneak it in, to ask for forgiveness rather than permission. As if representation needs forgiveness! As if there isn’t a crowd of readers looking for us to be brave and bold with such representation, as brave and bold as they are to live it every damned day. We haven’t even scratched the surface of voices that need to be heard.

As a writer, we know our characters represent real people, and yet there’s the tendency to mute them when they stand up to do the most good. Because our careers ride on it. Because the opinions of critics ride on it. Because Amazon algorithms reward numbers, not bravery. Because if the book doesn’t sell, we’re done. It’s also bullshit.

Add imposter syndrome to that. The feeling that nothing we do will be right or good or embraced, the desire to back off and play it safe, or to hide if we can’t please all the people all the time.

Heaps and heaps of bullshit to fall upon the shoulders of a timid, first-time writer.

So the advice to write broadly? To stay in line lest my career end before it begins? To be commercially viable, the next big thing, but not by taking risks or trying something different?

My new novel, FLOTSAM, is my first offering to the world. I wrote it with the usual dreams of seeing it on shelves in bookstores and of seeing a movie poster hang in a theater lobby someday. I wrote it with the dream of connecting with readers who would love it. But in my newness, I began to make missteps. I confused “my readers” with “all readers.” If I thought I could do something to make my audience wider, I was willing to do it. And when I didn’t know what to do, I looked for advice from people who said they knew.

And this was my mindset when I received counsel to remove my aliens’ non-binary, non-English pronouns to make the “broader” audience (read: heteronormative dudes) more comfortable. I argued against it, and my stand was dismissively waved off with “do what you want, but I’d stop reading a book whose author included them.” I couldn’t imagine a more horrible fate for my book. I imagined the mouths of my readers curling at the corners. A physical manifestation of distaste.

To my immediate shame, I took the advice.

The Yu’Nyun of FLOTSAM have no regard for gender. They do not have monogamous relationships, and love is not tied to reproductive systems. They breed in petri dishes and care far more about adherence to social structure and their own beliefs. In fear of alienating readers, who might put the book down when they reached their first xe or xist, I thought perhaps it would not be so bad to strip out those non-binary pronouns. It wasn’t about gender anyway, right? They were aliens, weren’t they? It was my creation, and I had a responsibility to do what I could to help my book succeed, didn’t I?

Based on how I managed the edits, though, I think my subconscious defied the revision. I didn’t erase their identities and cleanly break from the original intent I had for the Yu’Nyun. Instead I subconsciously wove in a breadcrumb trail that led this back to bite me later. I described the complex system of class-based pronouns from the aliens in my novel, in more detail than ever, cementing them into the story. I then exposited via the attitude of my protagonist that the identities were difficult, confusing, and uncomfortable – all the things I had been told they were – and should be disregarded in favor of choosing gender normative pronouns. Against their wishes. I wrote in thin, weak excuses for her behavior. The gender-assigning equivalent of “I’m not racist, but…”

I hated it. It felt wrong. It felt wrong to my character, too. It was not in her character, and the sentences I wrote to explain the decision away were shameful and unconvincing. My advance readers caught the disparity straight away, including Mary Robinette Kowal and a Netgalley reviewer named Abi, whose feedback drew our attention back to the issue. I am so eternally grateful for these readers who helped correct this issue by expressing deep reservations about it. As a writer, I am expected to express myself well, yet I cannot appropriately convey the roiling feeling in my head and gut that plagued me as a result of the identity suppression being uncovered and brought to light again. Not because my malfeasance was “exposed” but because we were so far down the path to publication that it might be too late to correct it. That the book might go to print as-is, and that I would have to live with knowing it could have been more and wasn’t, could have done more and didn’t.

Thankfully, Parvus Press stands by their authors. It was important to me, and so they stopped production to give the matter due attention. I was given not just their blessing, but their support to use my troublesome and uncomfortable pronouns throughout the text.

In a blog post looking back on Parvus’s second year in business, Colin Coyle wrote “[Saving money or doing the right thing] isn’t a choice. Always do the right thing. Always.”

Yeah, he was talking about FLOTSAM. I can’t express enough gratitude to Colin and the whole Parvus team for addressing this issue with decency and transparency. That roiling feeling in my gut evaporated when I explained where the problem originated, and he asked me, so matter of factly, “Do you really consider [heteronormative white dudes] to be your audience?”

No. No I do not. They’re welcome, of course. But I’ll not bend my pen nibs to their whims at the expense of people whose opinions do matter to me.

Always do the right thing. You know what that is. Represent it in your writing. Don’t sneak it in. Don’t wait until you’re successful and famous, safely assured your career will not be broken by your rebellious streak.

Shine a light on it. Normalize it. Stand by it.

R J THEODORE is hellbent on keeping herself busy. Seriously folks, if she has two spare minutes to rub together at the end of the day, she invents a new project with which to occupy them.

She lives in New England with her family, enjoys design, illustration, podcasting, binging on many forms of visual and written media, napping with her cats, and cooking. She is passionate about art and coffee.

Book One of the Peridot Shift series (Parvus Press), FLOTSAM is Theodore’s debut science fiction novel and is available in print, digital, and audio from Parvus Press.