What happens when you take your urban fantasty and hand it to a registered nurse? You get a secret ward at the local hospital which caters to vampires, were-things, and zombies. Cassie Alexander’s debut novel follows the newest nurse on the ward, Edie Spence, as she tries to treat with the world of the paranormal and gets caught up in a mystery.

Want to hear what Cassie’s favorite bit of Nightshifted

is? I thought so.

My favorite part of Nightshifted

is definitely the syphilitic were-dragon. I love all the medical stuff in my books, but he wins hands down. 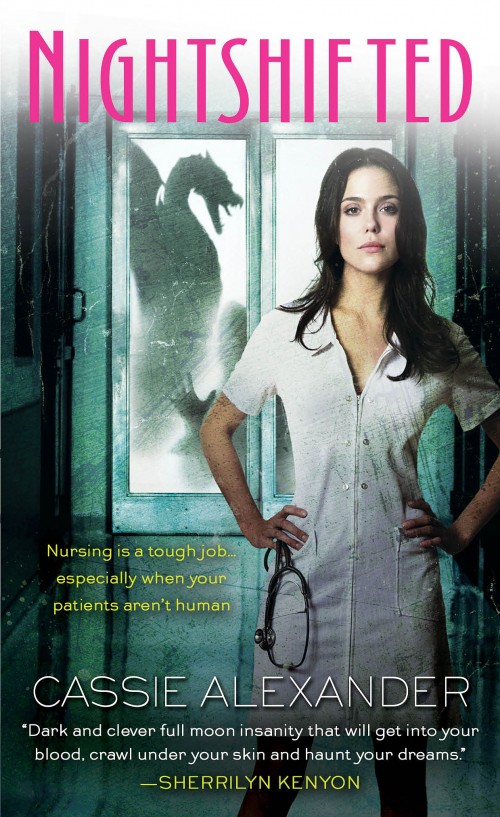 It took me awhile to get into writing Nightshifted. I was luring myself back into the book arena after nine books worth of no one else being interested in anything that I’d done. Nine books is a lot of rejection to handle, and my ninth book in particular I was so in love with that it not selling broke my writing-heart. After I trunked it, it took me two years to even try to write again. So when the idea for Nightshifted occurred to me, I pretended that it was a set of interconnecting short stories. I think secretly I knew it wanted to be a novel…but I was careful to pretend that I wasn’t falling for it. Like a jilted lover, I didn’t want to let myself get hurt again.

As it turned out, pretending that I wasn’t writing a book gave me the freedom to indulge in frankly crazy ideas – like my dragon with an STD, which was going to be the third of my short stories. I wanted to surprise people with something they’d never seen before. You never hear of supernatural creatures having any consequences for all of their unprotected sex. You also don’t hear about protagonists going to get STD tests either, which is another thing I do in my book. I know I’ve made bad choices here and there – why shouldn’t my protagonist? Or the weredragon up the block?

Past the weredragon, I love dropping in weird bits of medical knowledge in my books. Like the fact that Al Capone also had syphilis. It’s not a disease you think about often. (Unless you’re me. Who has actually had a patient with syphilis before.) I delight in secretly teaching people weird medical things, the only hazard is that sometimes current medicine changes on you. The new guidelines for CPR and advanced cardiac life support came out between me writing Nightshifted and Moonshifted, and all of a sudden you don’t give people atropine anymore for pulseless electrical activity when they code. I happened to be doing page proofs at the time and caught it, but now I live in fear of other parts of my books becoming anachronistic and quaint — although I hope to hell in ten years new readers don’t understand my slams against the insurance agencies because everyone is finally decently covered.

So yes, my favorite bit is the dragon. But secondarily to that – everything else! ;).

Cassie Alexander is a registered nurse and the author of Nightshifted, her debut novel out from St. Martin’s Press.

2 thoughts on “My Favorite Bit: Cassie Alexander talks about Nightshifted”