Carrie Patel is joining us today with her novel Cities and Thrones. Here’s the publisher’s description:

In the fantastical, gaslit underground city of Recoletta, oligarchs from foreign states and revolutionaries from the farming communes vie for power in the wake of the city’s coup. The dark, forbidden knowledge of how the city came to be founded has been released into the world for all to read, and now someone must pay.

Inspector Liesl Malone is on her toes, trying to keep the peace, and Arnault’s spy ring is more active than ever. Has the city’s increased access to knowledge put the citizens in even more danger? Allegiances change, long-held beliefs are adjusted, and things are about to get messy! 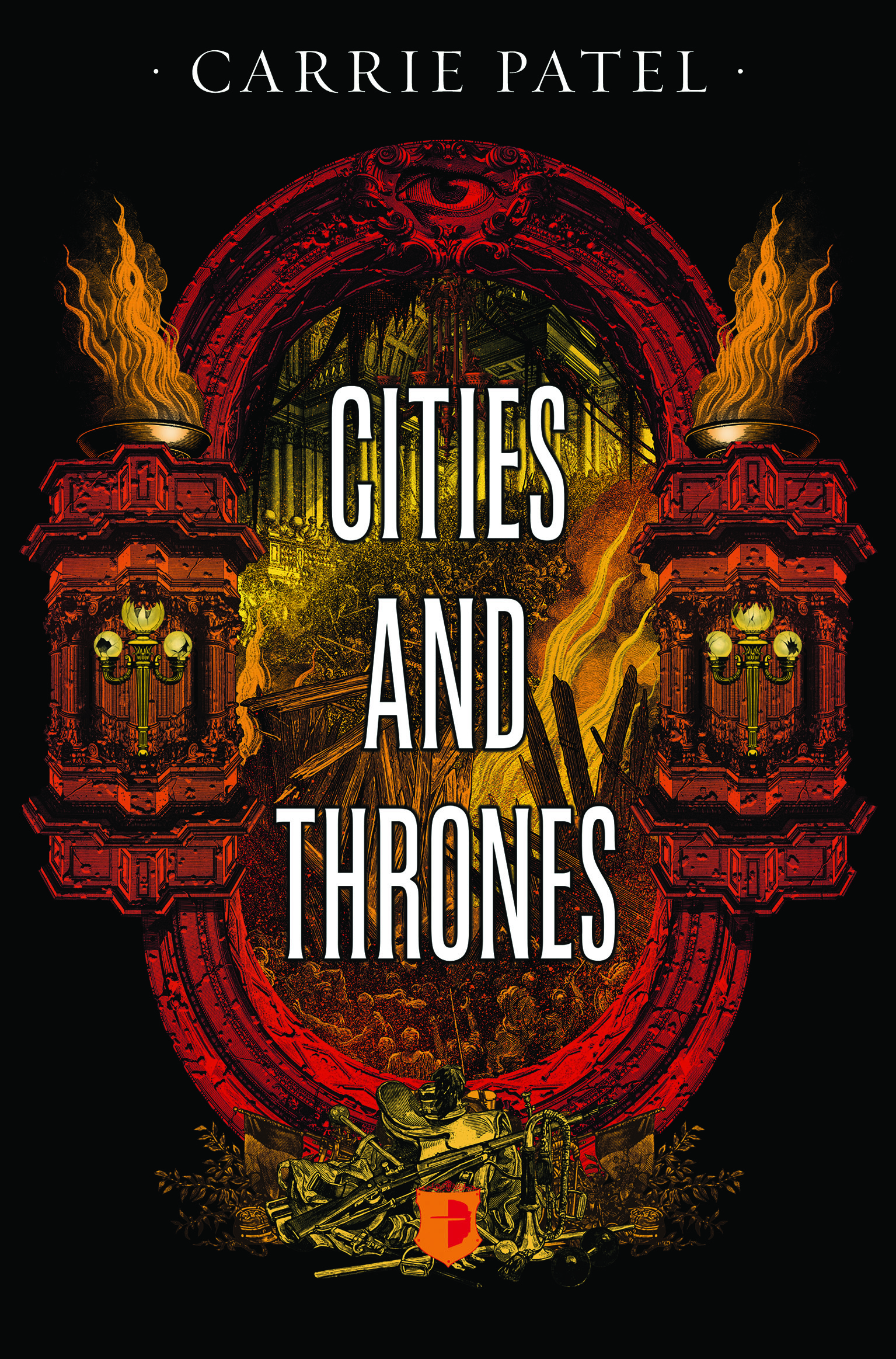 Revolution transforms the city of Recoletta. The new leaders dethrone the old oligarchs, open up the secret archives, and establish a new government based on change and transparency.

Months later, Recoletta is in shambles, the farming communes have revolted, and neighboring cities scheme against the crippled behemoth.

Inspector Liesl Malone, now chief of police, must protect her city from black market barons, violent insurgents, and the excesses of her new government. Meanwhile, Jane Lin has fled to the city of Madina, where she learns of a plot to crush Recoletta. Jane must decide whether—and how—to save her old city from her new home.

One thing I loved about writing The Buried Life was telling a story from the perspectives of two very different characters who are shaped by the events of the novel in very different ways. Inspector Malone is dogged, aggressive, and proactive to a fault, whereas Jane the laundress is cautious, observant, and mostly trying to keep her footing around dangerous and powerful people.

My favorite bit of Cities and Thrones was reversing their roles.

The Buried Life ends (spoilers) with Jane on the run and Malone in a position of leadership in the newly-reconstituted Recoletta. Isolated and (mostly) friendless, Jane must find a way to outmaneuver the city she’s left behind and the gauntlet of mysterious powers ahead of her. And through her vulnerability, Jane begins to recognize that she has a unique strength, too:

Jane remembered a story she’d been told weeks ago, at a party to which she never should have been invited by people who were, likely as not, dead by now. It had concerned Roman Arnault and his uncanny ability to survive by remaining relevant.

She was lucky to have made it this far on the goodwill of the farmers. But she needed something more. And on the other side of Salazar’s threat, she perceived an opportunity – the ability to survive and, perhaps, thrive by remaining relevant.

If only she had something he needed.

And that was when she noticed it. She’d seen it many times, but she didn’t recognize it at first because she’d only witnessed it obliquely, in interactions happening around but beyond her.

It was hunger. In the way Salazar pinched the handle of his mug, in the way his lips were slightly parted. He wanted, very badly, to know what had happened in Recoletta.

And then something else occurred to her for the first time.

She could use that hunger.

She comes to understand the power of narrative and the authority that comes from holding the answers that other people want. And so, without fully understanding the consequences, she begins to shape the story that the rest of the region will hear about Recoletta.

He wanted reasons. Something to give meaning to an as-yet unfathomable series of changes.

Realizing that her fate might hinge on those very reasons, she gave him the ones she suspected he wanted to hear.

“Recoletta’s weakening. Rotting from the inside. It was run by a few corrupt inbreds who have no particular skills to lay claim to except an incredible capacity for deceit and self-delusion.” Something hot and turbulent sang in her blood. Even if she hadn’t spared the matter much thought before, she knew everything she was saying was true. Whether she felt this good because her words seemed to have the desired effect or because she could finally speak them, she couldn’t quite say.

He was leaning in, so she continued.

“Sato recognized that, which is why he stepped in. But what he doesn’t recognize is that he’s little better. Others are catching on fast, though. You’ve seen the numbers coming out of Recoletta. It’s only a matter of time before his new city collapses on itself.”

While Jane learns to thrive in her new surroundings, Malone finds herself alienated and disoriented by the city changing around her. Her situation is further complicated by her new position of power, which she never wanted and which still leaves her with a bad taste in her mouth:

She still didn’t understand the politics of this new Recoletta. It didn’t take more than common sense to know that things were bad and getting steadily worse, but she couldn’t follow the minutiae of gestures, expressions, and inflections in the Cabinet meetings with Sato well enough to know whose fault it was from week to week (even if it was hers) or how promises and bargains were made over a raising of eyebrows and quirking of lips.

Recoletta had become an amorphous place of ragged flesh congealed around broken bones, and in the darkness of her apartment, she imagined she heard it contorting around her. The thought filled her with a kind of dread she was unable to admit even to herself. She closed her eyes each night, wondering what kind of city she’d wake up in.

Yet dashing and skulking through tunnels, she could feel the city under her feet, hear and smell the evidence of thousands of people still making their way in it. It reminded her that it was a real place of stone and metal and not merely an idea shaped by the debates between Sato and his cronies.

Carrie Patel is an author, narrative designer, and expatriate Texan. When she isn’t scribbling her own fiction, she works as a narrative designer for Obsidian Entertainment, where she wrote for Pillars of Eternity. Her work has also appeared in Beneath Ceaseless Skies. Cities and Thrones is her second novel and is the sequel to The Buried Life.

1 thought on “My Favorite Bit: Carrie Patel talks about CITIES AND THRONES”