Today Brooke Johnson joins us to talk about her novel, The Brass Giant: A Chroniker City Story. Here is the publisher’s description:

Sometimes, even the most unlikely person can change the world

Seventeen-year-old Petra Wade, self-taught clockwork engineer, wants nothing more than to become a certified member of the Guild, an impossible dream for a lowly shop girl. Still, she refuses to give up, tinkering with any machine she can get her hands on, in between working and babysitting her foster siblings.

When Emmerich Goss–handsome, privileged, and newly recruited into the Guild–needs help designing a new clockwork system for a top-secret automaton, it seems Petra has finally found the opportunity she’s been waiting for. But if her involvement on the project is discovered, Emmerich will be marked for treason, and a far more dire fate would await Petra.

Working together in secret, they build the clockwork giant, but as the deadline for its completion nears, Petra discovers a sinister conspiracy from within the Guild council … and their automaton is just the beginning.

So what is Brooke’s favorite bit? 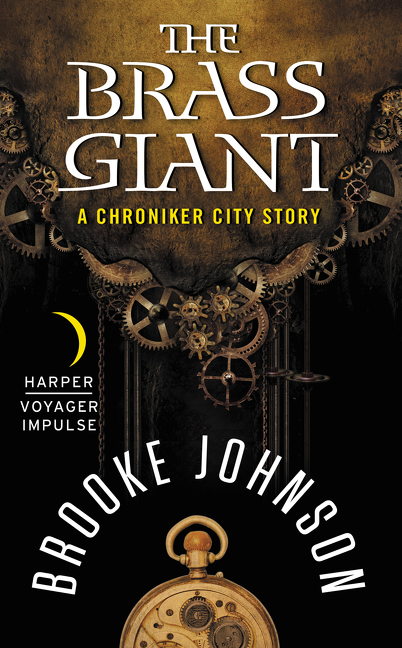 When I first sat down to write The Brass Giant, I never could have expected that this simple idea that popped into my head one late night of insomnia would somehow develop into this vivid alternate universe, sprawling with characters and stories. All I knew was that I needed to tell this one story, about a young girl who wants something impossible for her time—and how she makes that dream possible. I never imagined that Chroniker City, the fictional city in which The Brass Giant takes place, would grow so far beyond my original idea.

The city sits twenty miles off the southern coast of Wales, built onto a small island of rock eight miles west of Grassholm. In our world, a remote lighthouse stands there, built in the late 1850s. However, in my alternate timeline, a wealthy German engineer by the name of Gumarich Chroniker instead chose the location in the early 1830s for his greatest engineering project—a mechanical, self-sustaining city that would eventually become the technological hub of the modern world.

What I didn’t realize was that in the course of writing the novel, the city would evolve beyond that original world-building. As I delved deeper into the setting, the city gained history and layers and several different dynamics that I did not expect.

And I love that the world came alive like that. I love that this city started as nothing more than a simple what if… and then became this multifaceted world—from the subterranean levels of engines and boilers beneath the city to the leading polytechnical university of the modern world.

But one aspect of the setting stands out from the rest: the subcity. In The Brass Giant, I spend a good number of pages beneath the streets of the city proper. My main character navigates the dangerous service tunnels and networks of pipes to sneak into a restricted workshop, she visits her brother in the subcity boilers, and even uses her knowledge of the subcity layout to escape prison and go into hiding when she’s accused of espionage by the Guild.

Here’s a quick description from the novel:

Petra led Emmerich down the brass spiral staircase and stepped onto a catwalk, suspended high over the rows of furnaces and boilers. Steam hissed through the latticework of pipes along the walls and sweat glistened on the underbellies of the boiling tubs. Below, lines of workers rhythmically thrust shovels into coal carts and fed the furnace fires, the light of the glowing coals gleaming off their soot-covered skin. The air was hot with the tang of metal.

From the boilers, they traveled the tiers of catwalks, descending deeper into the subcity—vast chambers of enormous gear trains and spinning turbines laid out neatly below, hundreds of floor engineers, foremen, operators, and technicians attending to the chief tasks that kept the city alive and running. The droning roar of the massive machines filled the air with a deafening hum, infused with the sound of clanking pistons, the oscillating whir of spinning wheels and gears, the groan of overburdened pipes, and the gratifying hiss of steam as pressure was released.

Petra and Emmerich drifted through the discordant rhythm, passing by the busy control deck and into the very heart of the subcity—the primary engine room, the source of all power to the city. They stood over the spinning driveshaft, surveying the grandest of machines from the narrow catwalk bridge that spanned the width of the chamber. It was here, deep in the thrum of the city itself, that Petra felt truly alive, truly inspired—her sanctuary.

She rested her arms against the railing, breathing in the rich scents of coal, gasoline, and oil, the pulse of the city singing through her body. Emmerich marveled at the whirling turbine, his eyes brighter than she had ever seen them, filled with an excitement she knew well. He no doubt felt the thrum of the machines in his chest, the whir of gears in his mind, the oscillations of linkages in his bones, the hiss of steam in his lungs. Here, he was one with the machines, one with the city, connected in the same way she was. In that moment, caught up in the movement of the machines, he understood her in a way that no one else ever could. It was why she had brought him here.

The subcity is what brings Chroniker City to life for me, transforming what could have been yet another ordinary London-esque setting into a fully mechanized city, a character in its own right, with many secrets hidden in its deep, dark hollows.

This city is alive, and I hope that some small hint of its depth and mystery reach readers as they read the novel, and that Chroniker City comes alive to them in the same way it exists in my head.

Brooke Johnson is a stay-at-home mom and tea-loving writer. As the jack-of-all-trades bard of the family, she journeys through life with her husband, daughter, and dog. She currently resides in Northwest Arkansas but hopes to one day live somewhere more mountainous.