Andrea Phillips is joining us today with her novel Revision. Here’s the publisher’s description.

Mira is a trust fund baby playing at making it on her own as a Brooklyn barista. When Benji, her tech startup boyfriend, dumps her out of the blue, she decides a little revenge vandalism is in order. Mira updates his entry on Verity, Benji’s Wikipedia-style news aggregator, to say the two have become engaged. Hours later, he shows up at her place with an engagement ring. Chalk it up to coincidence, right?

So what is Andrea’s favorite bit? 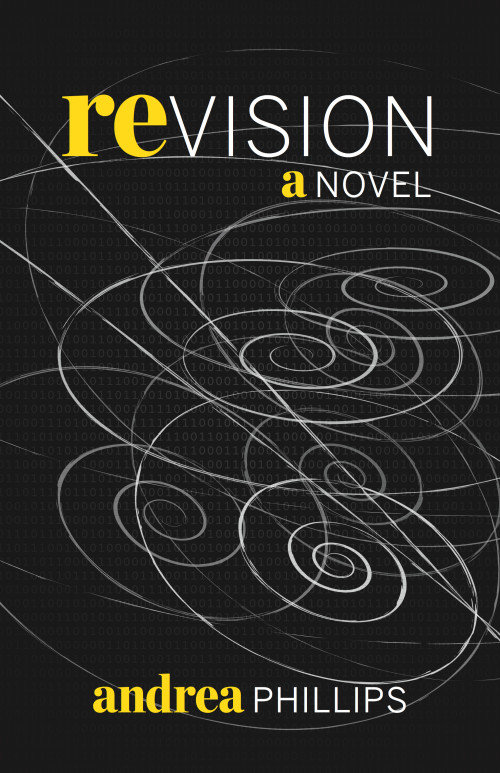 My very favorite part of Revision is the relationship dynamic between two characters in the supporting cast: Joseph and Joey, who are the proprietors of Joes’ Buzz, the coffee shop where Our Heroine is employed. I love the Joes. They’re a joy to spend time with, and I think it comes through in the writing.

Joseph sauntered in early in the afternoon. Where Joey could have been the second coming of Jerry Garcia, Joseph looked like a Korean Ben Franklin, though I don’t think anybody would have been brave enough to say it right to his face. He had an adorable round belly, a balding pate with a little ponytail holding his graying hair back, and a tiny pair of half-moon reading glasses perched at the bottom of his nose.

“Our Mira’s getting married,” Joey called to him, right across the whole room.

“Is she pregnant?” Joseph called back. I must have turned about five different shades of crimson. I could tell from the heat of all that blood rushing to my face at once.

The couple of regulars in the place looked at each other and then studiously focused on their phones and lattes. You could practically see their ears grow three sizes, though. Sigh.

Joseph strolled up and carefully inspected my reddened eyes, my sallow complexion, my filthy hair. “You look terrible,” he said. “I bet it’s going to be a girl.”

Fiction is riddled with bad relationships. Angst! Drama! Faithlessness! And that’s as it should be, because conflict is the heart of drama. Good relationships can be incredibly boring to read about. Static, or even entirely lifeless. Who wants to read that?

And so it’s not surprising that the primary relationships in Revision are troubled, too. Trust, communication, boundary issues: it’s all in there. In particular, Mira’s romantic relationship with Benji is reminiscent of the subtly bad relationships many of us have in our teens or 20s, before you learn how to do it right. (Or maybe that’s just me?)

But I think it’s important to show good relationships, too, so our mental template for what love looks like doesn’t only come in fifty shades of abusive or unhealthy.

And to take it a step further, I especially wanted to portray a good, stable, mature gay marriage, because they’re fairly hard to come by on screen or on the page, even now. (Though I should point out that I’m a straight woman myself, and I in no way mean to elevate myself as an authority on this topic!)

I find that when a gay relationship gets any attention at all in mainstream media, the plot often focuses on that gayness itself as a source for drama and characterization. Gay people in stories are defined by questions of who’s out and who isn’t; who is welcomed and supported by their family, and who isn’t. We tell that kind of story so much that we forget it’s not the only story there is. It becomes reductive; characters defined exclusively by their gayness lose the chance to be complete people.

So I try to do differently, and show more of the vastness of human experience. So: the Joes, who are defined by the warmth of their feelings for one another, not their relative position on the spectrum of sexuality. The Joes have one of the most delightful relationships I think I’ve ever written. They’re comfortable with one another, they have a great rapport, they’re loving and protective of each other and of the life they’ve built together. No matter what happens to them, there’s no question they’ll find a way through it together.

Andrea Phillips is an award-winning transmedia writer, game designer and author. She has worked on projects such as iOS fitness games Zombies, Run! and The Walk, The Maester’s Path for HBO’s Game of Thrones, human rights game America 2049, and the independent commercial ARG Perplex City. Her projects have variously won the Prix Jeunesse Interactivity Prize, a Broadband Digital award, a Canadian Screen Award, a BIMA, the Origins Vanguard Innovation Award, and others. Her book A Creator’s Guide to Transmedia Storytelling is used to teach digital storytelling at universities around the world.

Her independent work includes the Kickstarted serial The Daring Adventures of Captain Lucy Smokeheart and The McKinnon Account, a short story that unfolds in your email inbox. Her debut novel Revision is out on May 5 from Fireside Fiction Co. and her short fiction has been published in Escape Pod and the Jews vs. Aliens anthology.

You can find Andrea on Twitter at @andrhia. I mean, if you like that sort of thing.