Bradley P. Beaulieu and I met at Orson Scott Card’s Literary Boot Camp in 2005. The story that he wrote in that class stays with me to this day. Now, he’s got three novels out and I toooootally knew him when.

So please give Brad your attention as he tells you about his Favorite Bit. 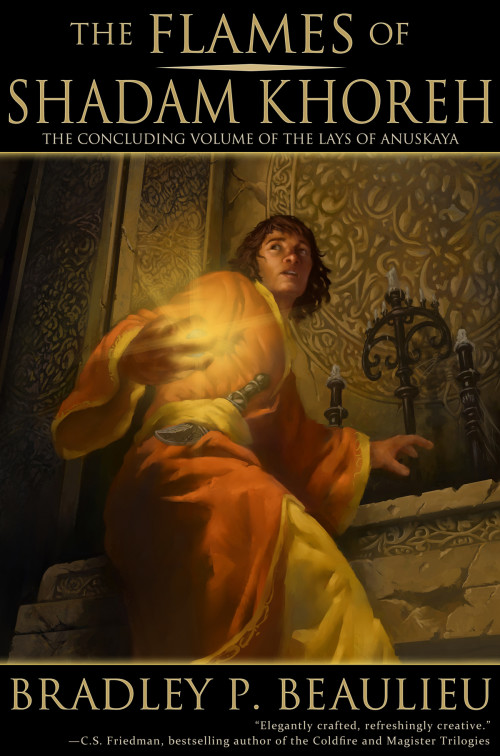 It happened as a matter of chance.

In the early pages of my third book, The Flames of Shadam Khoreh, I’m telling a story of a growing war, a war that was born and that blossomed in the second novel in the trilogy. The primary characters are on a quest to find a fabled stone, a crucial piece needed to heal the rifts that have been forming throughout the world. They’re searching for the lost valley of Shadam Khoreh, a place far removed from the warfront, and I feared that the trouble brewing in the world—largely the war itself, but also the fallout from the deadly wasting disease caused by the rifts—wouldn’t get enough attention. I felt that the weight of worldly events wouldn’t be fully realized.

So I added another character.

His name was Styophan Andrashayev, and he was a soldier, a strelet in service to Nikandr Khalakovo and his brother, the Duke. Styophan was sent west in command of a small fleet of windships to treat with a band of vicious tribesmen known as the Haelish. The Haelish had long been enemies of the Empire, and so the Grand Duchy had good reason to speak with them.

But when Styophan’s fleet arrives, things are … not what he expected, and he soon finds himself on a long journey to deal with the surprises the Empire had in store for him.

As I read over the novel one last time before calling it final, I found that Styophan, without my even realizing it, had stolen the show. My ears perked up when I came to his sections. I was invested in the other threads, certainly—they were filled with characters and a story I had come to love, after all—but there was something about Styophan that intrigued me.

It took a review to crystalize it for me. Justin Landon at Staffer’s Book Review called Styophan an everyman character, and he is. He’s removed to a degree from the weight that sits on the shoulders of the aristocracy. He’s not embroiled in magic and the ephemeral nature of using it. He loves his country dearly, but his mind is weighed more by thoughts of his wife and growing a family than it is the welfare of the entire Grand Duchy.

Styophan, in other words, brought a sense of counterpoint to the other characters—a view from the trenches—and it helped to round out the tale that would have been poorer without it. In paintings you’ll see light used to counterbalance dark, an opposing color used to make the primary stand out more. Such was the case here. Styophan’s addition brightened the entire story.

And that’s why his tale is my Favorite Bit.

BIO
Bradley P. Beaulieu is the author of The Flames of Shadam Khoreh, a Russian-inspired epic fantasy that has been called “a special series with one of the best concluding volumes in the history of epic fantasy.” Brad and his novels have garnered many accolades and most anticipated lists, including two Hotties—the Debut of the Year and Best New Voice—on Pat’s Fantasy Hotlist, a Gemmell Morningstar Award nomination for The Winds of Khalakovo, and more. In May of 2013 Brad released Lest Our Passage Be Forgotten & Other Stories, his premiere short story collection. Brad also co-hosts Speculate! The Podcast for Writers, Readers, and Fans at www.speculatesf.com. For more, please visit www.quillings.com.