Arwen Elys Dayton is joining us today to talk about her book Stronger, Faster, and More Beautiful. Here’s the publisher’s description:

For fans of television shows Black Mirror and Westworld, this compelling, mind-bending novel is a twisted look into the future, exploring the lengths we’ll go to remake ourselves into the perfect human specimen and what it means to be human at all.

The future is curious.

Today our bodies define us. We color our hair; tattoo our skin; pierce our ears, brows, noses. We lift weights, run miles, break records. We are flesh and blood and bone.

Tomorrow has different rules. The future is no longer about who we are–it’s about who we want to be. If you can dream it, you can be it. Science will make us smarter, healthier, flawless in every way. Our future is boundless. 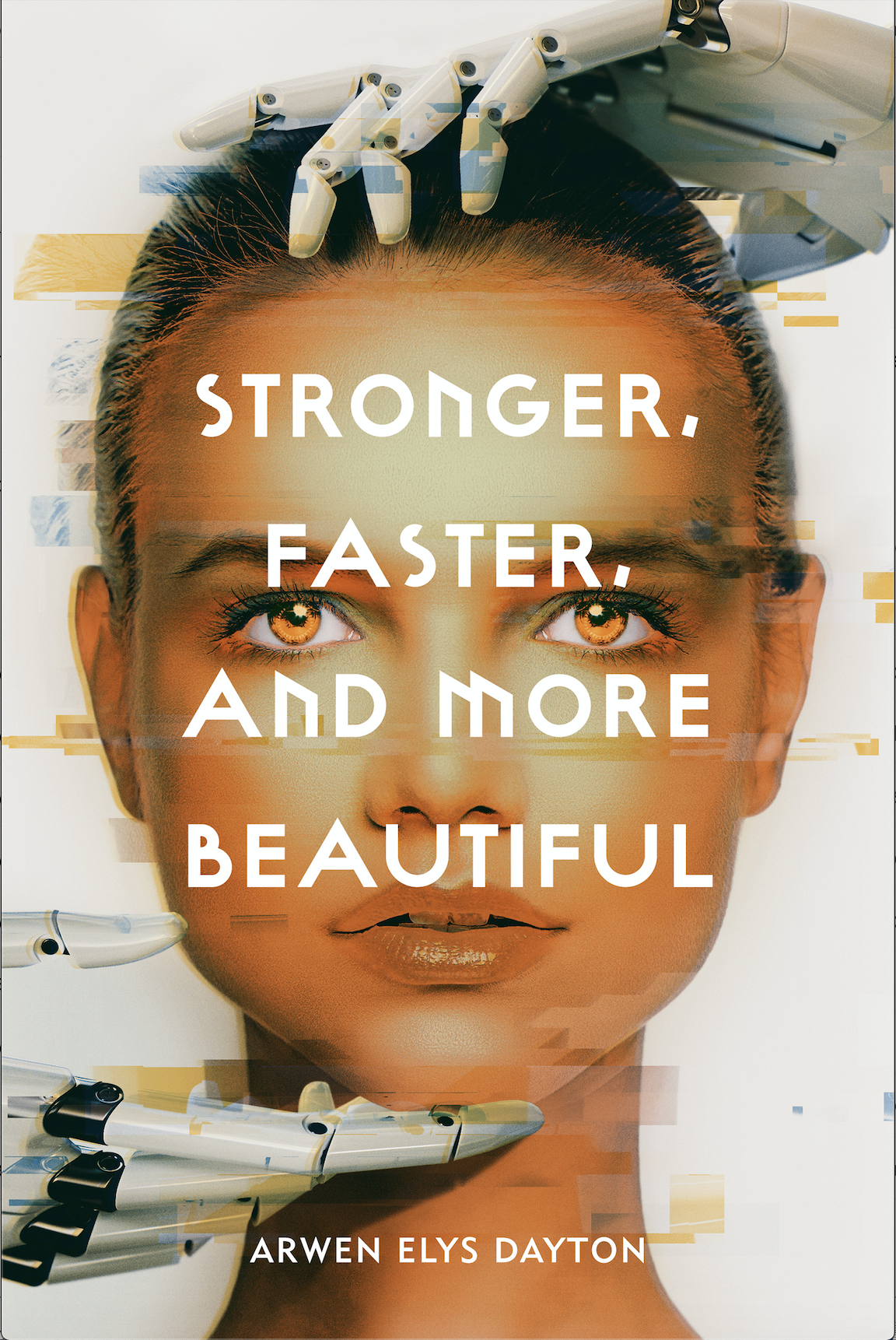 The present day revolution in biotech and genetic engineering is fascinating without any fiction added in. There is CRISPR, promising the ability to edit human or other DNA as a word processor edits, well, this or any other book. There are life extension protocols being tested in actual people, there are pigs growing what will one day be human-compatible organs inside their bodies, there are scientists editing mosquitos so that they cannot carry the malaria parasite.

And yet the challenge was to know about all of these things and to let them fade into the background or even disappear in service of the human events that make up the six sections of this novel.

So my favorite bit is one of those simple, human moments, where there is only a hint of the biological warfare, so to speak, that is going on under the surface of Milla’s skin.

Sixteen-year-old Milla, who should have died in a serious car accident, has been rebuilt, and the real and “not so real” parts of her are now regulated by the meshline woven through her body. Unfortunately, not everyone believes that such drastic reconstruction and alteration of the human body is a good thing…or even an ethical option.

Here, Milla is in a car at a drive-in movie (they are back into vogue, in wild 3D) with a boy who has finally asked her out. But intimacy means touching, and touching leads to discovery…

“It’s just, in the accident,” I mumbled. “Some things had to be fixed.” This sounded weak, possibly because it was an absurd understatement.

“Lilly told us it was just your legs. You broke your legs.” The movie played out across his cheek as his shadowed eyes studied me.

“That was . . . mainly what happened,” I hedged. It was not right that anyone should pass judgment on me if I told the truth. And yet I did not, I did not, want to tell the truth.

“Is it your skin under there?” He sounded almost mesmerized. A lump of fear had formed just above my stomach. He reached for my shirt, but I held it down.

That was a lie. The artificial skin he’d felt, covering more than half my torso, was based on my skin, maybe you could say it was partly my skin, but it was combined with the mesh that made a bridge from the parts that were all me to the parts that weren’t me anymore. It felt like skin—until you touched my real skin right next to it, which was what had happened when his fingers traced the meshline across my right breast. Then the difference became glaring.

He was already pulling my shirt back up and I didn’t stop him this time; panic held me motionless. He would see, he would know! What should I have done? Slapped him? Escaped from the car and run from the drive-in?

The movie had gotten brighter and in its light, the variance in texture and color of my body was discernible. The meshline traveled up from beneath my bellybutton, curved across my stomach and then cut across my right breast. On one side of the mesh was me, real flesh, one hundred percent Milla. On the other side, things were harder to categorize.

“How far does it go?” he asked, looking at where the line disappeared beneath my waistband, down toward my “lady parts,” as my mother referred to them.

I was transfixed by . . . by his searching look, maybe? By the shock and concern in his face?

“You’re looking at most of it,” I whispered.

Another lie. Not visible from my current position was the line that ran from my right breast, across the ribs beneath my right arm and then traced a path down the right side of my back. Nor could he see how the damage extended inward to my heart and one of my lungs, to my other organs, and yes, to my lady parts too.

“Your heart?” he asked, as if I had spoken those thoughts aloud.

I could have said that I was burned and the fake skin was just to cover burns. Why did I owe him any explanations? But . . . the heart in my chest had saved my life. It deserved better than a shamefaced excuse.

“It’s like what you said for your grandmother,” I whispered. “It’s a real heart, mostly. From my own cells, but there are some other parts that make up for the parts they can’t grow yet. Tiny little robotic parts made out of squishy stuff. It’s a combination.”

He sat back, and I yanked my shirt down. A series of emotions marched across his features. Not all of them made sense.

“This is why you hate Reverend Tadd,” he said.

“Why haven’t you told anyone? Lilly told the whole school it was just your legs. It’s—it’s—”

“More than my legs,” I said. What was I seeing on his face? Fear?

“How much of you is real?” he asked. He was starting to sound agitated. He wiped the back of his hand across his mouth, as if unconsciously scraping off the taint of my counterfeit lips.

“My mouth is real,” I whispered.

ARWEN ELYS DAYTON is the best-selling author of the Egyptian sci-fi thriller Resurrection and the near-future Seeker Series, set in Scotland and Hong Kong.She spends months doing research for her stories. Her explorations have taken her around the world to places like the Great Pyramid at Giza, Hong Kong and its islands, the Baltic Sea. Arwen lives with her husband and their three children on West Coast of the United States. You can visit her and learn more about her books at arwendayton.com and follow @arwenelysdayton on Instagram and Facebook.