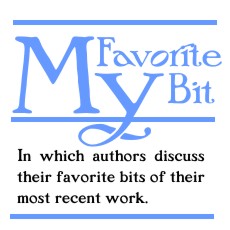 Alethea Kontis is one of my first writing friends. Anyone who knows her, knows that she is funny, enthusiastic, and incredibly generous. She pretty much set the tone for my introduction to fandom and the SF community. She’s continuing to set the tone for an introduction to the world of the fantastic with her children’s books. Here’s Alethea to talk about The Wonderland Alphabet: Alice’s Adventures Through the ABCs and What She Found There 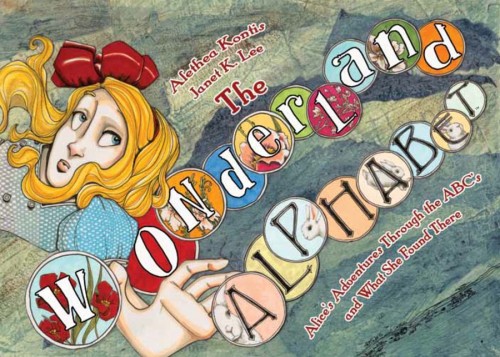 My favorite bit about The Wonderland Alphabet: Alice’s Adventures Through the ABCs and What She Found There is not that I get to work with (and sit at tables with, and get interviewed with, and sign books beside, and plan new projects with) one of my dearest friends: Janet K. Lee.

That should be my favorite bit. Indeed, it takes a very close second.

The Wonderland Alphabet wasn’t originally meant to be a real book at all; it was a way for Janet to hang on to her coveted spot in the inaugural Nashville art show Proto Pulp: Classic Books of the Future when she realized that a non-disclosure agreement prevented her from displaying original pieces of the graphic novel on which she was currently working (Return of the Dapper Men). She was going through an Alice in Wonderland phase at the time; I had just sold AlphaOops: H is for Halloween. We worked in the same office building.

“There’s never been an Alice in Wonderland alphabet book,” Janet said to me.

Like a rabbit with a pocket watch, one was decidedly overdue.

I went home and pulled Alice’s Adventures in Wonderland and Through the Looking Glass, and What Alice Found There off my shelf. I wrote the alphabet down the left hand side of a notebook page, just I had done with the AlphaOops books, and noted every possible word for every possible letter. Some letters had only one word. Some had plenty. Some had none (X, Z), and for those I used a little imagination. I gave the list to Janet, who circled (where applicable) the objects that called to her illustrative genius.

And then came poetry.

I started writing sometime between the ages of eight and ten. But it was not prose; I was a poet. My favorite books when I was very young (4-5) were Gelett Burgess’s Goop Tales. Shortly after that came Mother Goose, Dr. Seuss, and my beloved Ogden Nash. Sometime around middle school, my little sister discovered Shel Silverstein. And my parents took us to Shakespeare plays every summer, or whenever we could find them. Like the fairy tales, the work of these poets was often very dark but always very clever.

So very, very me.

Because this Wonderland Alphabet project was only for Janet (and the tiny white cards that accompanied her artwork in the show), I didn’t give a fig about making my verse perfect and palatable. I wrote the poems because they were FUN…and yes, I giggled a lot while doing it. (10 points for spotting the Shakespeare reference. 100 if you catch the far more subtle Ogden Nash homage.) Janet had an equally amusing time with the illustrations, posting each one on her Facebook wall as she finished. The first annual Proto Pulp show was a smashing success.

And then Return of the Dapper Men won the Eisner Award for Best New Graphic Novel.

“What else do you have?” the eager publisher asked Janet.

“Well, my friend Alethea and I did an Alice in Wonderland alphabet book a while back,” Janet replied. “She’s a New York Times bestselling author now, you know.”

Thus and Thence, The Wonderland Alphabet: Alice’s Adventures Through the ABCs and What She Found There came to be.

And they didn’t change my poetry at all. Not one blessed, subversive word.

THAT is my favorite bit.

[The Wonderland Alphabet is rated E: For Everyone. The book contains content suitable for readers of all ages. It may contain minimal violence.]

The Wonderland Alphabet: Alice’s Adventures Through the ABCs and What She Found There: amazon

Eisner Award-winning artist Janet Lee lives in Nashville, the Wonderland of the South, and loves to drink tea with rabbits when she can.

Alethea Kontis is a New York Times bestselling Fairy Tale Princess.
Did you know you can support Mary Robinette on Patreon!

2 thoughts on “My Favorite Bit: Alethea Kontis talks about The Wonderland Alphabet”