Adam Christopher has a sequel to his fantastic book EMPIRE STATE.

The Empire State is dying. The Fissure connecting the pocket universe to New York has vanished, plunging the city into a deep freeze and the populace are demanding a return to Prohibition and rationing as energy supplies dwindle.

Meanwhile, in 1954 New York, the political dynamic has changed and Nimrod finds his department subsumed by a new group, Atoms For Peace, led by the mysterious Evelyn McHale.

As Rad uncovers a new threat to his city, Atoms For Peace prepare their army for a transdimensional invasion. Their goal: total conquest – or destruction – of the Empire State.

Ah, The Age Atomic. My first sequel, the first time I’ve deliberately returned to a world and characters I’ve previously created. There’s something nice about that – writers often feel more than a little bereft when they complete a novel, because, having lived with the story and the people within it for months – maybe even years – letting them go can be difficult. These characters come to life during the writing process, sometimes born from nothing more than a name and a vague notion. Over the course of the first draft, the second, the third, they become their own people. They develop personalities and traits beyond what the writer consciously intended, and they begin to find their own story and plotlines within the work, no matter how detailed your outline might be. When the writing is going well, when the book works, its characters become your best friends. That’s the beauty of creation, and is my favourite part of the whole writing process. 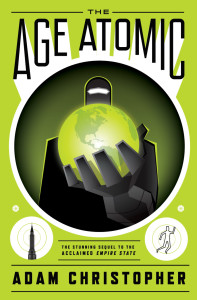 So returning to the world of Empire State was a pleasure. I was going to see how my old friends were doing, and find out what new trouble they were in. But I also wanted to expand the world I’d created, and add some new characters who would play a vital role in the story.

Empire State, my debut novel, is set mostly in a twisted, alt-universe reflection of Manhattan. It’s Prohibition-noir; half-science fiction, half-hardboiled detective story. For The Age Atomic, I wanted to shift it forward a little, as my story about atomic robots and Communist paranoia was most definitely Silver Age sci-fi: the 1950s. But our everyman hero, Rad Bradley, is a pulp detective, and despite the change in era I wanted him to have a suitably hardboiled opening scene.

Enter the damsel in distress, Jennifer Jones. My favourite bit of The Age Atomic starts in chapter two, in which Rad has to rescue the aforementioned Ms. Jones from the clutches of Cliff, a gangster with a secret. Here’s the first couple of paragraphs:

She was pretty and her name was Jennifer and she was going nowhere, not tied to the chair like she was. She had long brown hair with a wave in it and was wearing a blouse with ruffles down the front that Rad thought looked nice but which meant she must have been freezing.

The man standing next to the chair was less pretty. His name was Cliff and he had a face to match, and he was holding a gun that was pointed at Rad in a way that made the detective nervous. The thug was wearing a trench coat, and beneath the coat were muscles, hard, solid; muscles that spoke of bar room brawls and violence in the small hours. Rad Bradley was a detective now and had been a boxer before, but Cliff’s frame made him decide that, when it came down to it, he didn’t want to go one-on-one with Cliff, even if he could get that damn gun out of the way. But, then again, a job like his on a night like this, punching someone you didn’t want to was likely to be in the cards.

The gun in Cliff’s giant fist was a revolver, and the hammer was back.

Writing in that kind of pulp style is a lot of fun, believe me. Of course, things are not quite what they seem and by the end of the chapter, Rad realizes that Jennifer knows a heck of a lot more about what’s going on in the now-frozen Empire State than anyone else.

Writing Rad and Jennifer was my favourite part of the book – here’s an old character, the hero of Empire State, someone I know well, meeting someone brand new. Jennifer Jones starts off as a stranger – for me and Rad both – but over the course of the novel I grew to know her and understand her point of view and, importantly, what she needed to do in the book. It might sound strange when writers talk about their stories and characters like they don’t quite have full control of them, but that’s actually true. In The Age Atomic, Rad and Jennifer form a dynamic duo as they investigate the Empire State’s robot menace, eventually uncovering…. Well, you’ll have to read the book to find out.

And as for the remarkable Jennifer Jones, well, I suspect we haven’t seen the last of her…

Adam Christopher is a novelist and Sir Julius Vogel Award-winning editor, and is the author of Empire State, Seven Wonders, and The Age Atomic. Born in Auckland, New Zealand, Adam grew up watching Pertwee-era Doctor Who and listening to The Beatles, which isn’t a bad start for a child of the 80s. In 2006, Adam moved to the North West of England, where, when not writing, he spends his time drinking tea and obsessing over superhero comics and The Cure. You can find Adam online at www.adamchristopher.co.uk and on Twitter as @ghostfinder.

1 thought on “My Favorite Bit: Adam Christopher talks about THE AGE ATOMIC”