The current statutory liability for a company which has an oil spill is $75 million dollars, which, as Rob points out, is the cost of a modest Hollywood film.

Here is a simulation of what might happen if the typical current patterns hold and the spill continues to go unchecked.

To me, this is scarier than any Hollywood film, and the cost is much higher.

If this were Hollywood, then some scientist would invent a bacteria that would eat the oil spill without subsequently consuming all the petroleum on the planet. There would be a kiss between the scientist and the romantic interest as the sun sets over a spotless ocean. A dolphin would leap triumphantly out of the water.

That’s not going to happen.

Cherie Priest wrote a very moving post called, Oil, about what is happening in the Gulf right now, which I encourage you to read. She also came up with a list of things you can do about the oil spill.

Just to kind of bring home exactly how big the spill is right now visit If It Was My Home which puts the oil spill over the place where you live.

Here it is over Iceland. 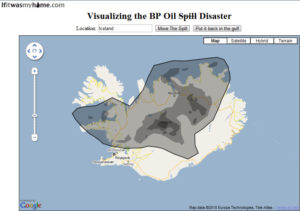 And finally, if you haven’t seen it yet, swing by the Big Picture which has pictures of animals caught in the oil spill.  It is heartbreaking and makes the viscosity and consuming nature of the oil very palpable. The pictures are difficult to look at.

Normally, I mock Hollywood endings but I would take one right now.

7 thoughts on “If the Oil Spill were in Hollywood”