Hurrah! I’m 47 today and I’m getting on an airplane to go to Salt Lake City to record Writing Excuses and attend LTUE. On my birthday. On a plane.

I think we all know how this is going to go.

Meanwhile! I have a party favor for you. This is the first scene, sort of, in Ghost Talkers. The reason I say “sort of” is that I’ve trimmed it so that it works as a short story in order to not leave you totally hanging until the novel comes out in July. 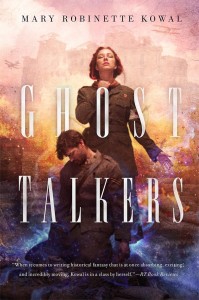 “The Germans were flanking us at Delville Wood when I died.”

Ginger Stuyvesant had a dim awareness of her body repeating the soldier’s words to the team’s stenographer. She tried to hold that awareness at bay, along with the rest of the warehouse. Even with a full circle supporting her, she ached with fatigue and that would pull her back into her body before her shift was finished. It wouldn’t be fair to force Helen to assume control of the circle early. The other medium was just as exhausted.  Around her, the currents of the spirit world swirled in slow spirals. Past events brushed her in eddies of remembrance. Caught in those memories, scent and color floated with thick emotion. The fighting at the Somme had kept the entire Spirit Corps working extra shifts trying to take reports from the dead, and the air was frigid with souls.

The young soldier in front of her had been with the 9th Scottish Division, 26th Brigade, the Black Watch. Private Graham Quigley technically still was a member of the Black Watch until his unfinished business was completed and he could cross beyond the Veil.

Belatedly, Ginger realized what he’d said. “So you could see the Germans? You know their positions?”

His aura rippled black with remembered pain, but a flash of amber satisfaction shot through it. “Oh, ma’am. Don’t I just. The shell that got me made it clear as all that I’d not live through the day, so I had the boys prop me up.” Quigley grinned. “I saw the Huns set their guns up, not fifteen feet from where I lay bleeding.”

“When did you die? The time. Did you see the time?”

Most soldiers came in within a few minutes of their death, but sometimes their confusion, or the sheer number of them meant that their report didn’t come until hours later.  Knowing when they died was vital. Her shift would end at noon, so Quigley had only been dead for a few minutes.  “Can you show me their positions?”

“Aye. That I can.” The amber of his pleasure suffused and buried the dark pain of dying. If the Spirit Corps did nothing else, it gave these young men some meaning for their death.

“Give me a moment.” Her circle, well-trained as they were, made the necessary changes to their configuration. Taking care not to break contact with her, Mrs. Richardson, on her right, slid her grip up Ginger’s arm so that her hand was free. An aide, seated in the center of the circle, positioned the drawing board in front of her. Edna had already clipped a map of the village Longueval and Delville Wood to the board. Neither woman had the Sight, so to them the soldier was only a dim shadow and only when they were in full contact with the circle. Without it, they’d feel nothing more than a spot of uncanny cold where he stood. But while the circle was in effect, with a strong medium to lead, all six of the sitters could hear him and the countless drills they had done stood them in good stead.

If Quigley had seen where the Germans were, the command center could hopefully find a way to stop those guns. A cluster of other ghosts waited, crowding the warehouse until another circle was free to take their report.  Dimmer flashes of living people walked through the room carrying stenographers’ reports or updated orders as the casualties poured in.

Ginger reminded her body to take a breath before she turned her attention back to the soldier. She pushed her soul farther out of her body. The relief sighed through Ginger as her mortal weight lessened. Her soul blended with the radiance around her, but there was not time to permit herself to drift in the spirit plane and delight in the tangible flow of spirits. “Show me, please.”

She reached out for Quigley and let his soul wrap around hers, dropping into his memories.

He is leaning against a wall trying not to look at where his legs used to be. The pain is not as bad as he’d thought it would be, but he’d give anything for a drink of water. He is so thirsty. The blasted Huns have overrun their position and are setting up their guns behind the wall of what used to be a church. No proper respect, shelling a church like that. He blinks, trying to focus, but the world is starting to go grey around the edges. The Lance-Corporal had told them how important it was to the war effort to remember after death. There are five of them, three to handle the gun, plus another two to manage the horses that pulled it into place.  The sound of the gun going off is deafening, but he’s too tired to flinch. It’s cold. It’s a relief after the oppressive July heat. But why is it cold? The gun fires again, and he stares at it, willing himself to remember. It’s a heavy field Howitzer — a five nine — and they look to be settling in to stay.

Ginger pulled herself back, sinking toward her body. It had gotten even colder in the vast warehouse — no. No, that was just a residual from Quigley’s memory. Her body shuddered with it anyway and she wanted to retreat from the heavy mortal flesh. The circle pulled her soul down, anchoring her. Ginger checked to make sure her body was still breathing and nodded to the soldier. “Thank you. That is very good information. I will make a commendation to your superior officer.”

Back in the mortal sphere, Edna was slipping the map from the board. Upon it, Quigley had used Ginger’s body to draw the location of the gun and the Germans at the time of his death. A runner would take the map to the intelligence officers and they would relay the information back to the front line. Ginger sent up a prayer that they could stop the gun, even while knowing that there would be more. There were always more deaths facing her.

“Am I finished, ma’am?” Quigley’s presence pulled her attention back to where it belonged. “They said in the training that we could send a message after we reported in.”

“Yes. Of course.” Her fatigue would have to wait another ten minutes until her shift ended. “What message would you like to pass on?” She would just repeat his words, and let the stenographer take note instead of spirit writing. It seemed unjust to complain of being tired when speaking to the dead, but her entire body ached with other people’s memories.

“Tell Alastair Olsen that he owes me five bob. He’d bet that I was too daft to remember to report in and I guess he was wrong.”  The soldier twisted the memory of his cap in his hands.  The amber faded and for moment his aura went deep purple with grief. “And tell my mum that I love her and that I’m sorry about the table leg. I meant to fix it before I went to war. Tell her I’m sorry I didn’t. Hell — tell Alastair Olsen to give the five bob to Mum and she can use that to get the leg fixed. Only don’t say I said ‘hell’.” He looked behind him and the edges of his spirit blurred. “Oh… that’s the light the Lance-Corporal was telling us about I guess. Huh. It’s yellow.”

With a sigh, Quigley let go and diffused away from them. The eddies of his passing tugged on Ginger’s soul, nudging her to go along with him on his journey. Her circle stood fast, holding her to this mortal coil. With her spirit, she held a salute as Pvt. Quigley’s soul passed fully through the veil to the next plane of existence.

And then another soldier took his place.

I should note that Ghost Talkers begins on 16 July 1916 during the Battle of the Somme, and comes out on 6 July 2016. Which is really, kind of awesome.

Oh, and for my birthday? I’m treating myself to a pair of these so I can cos-play Ginger.

17 thoughts on “I am 47 today! Have the first scene of GHOST TALKERS as a party favor.”