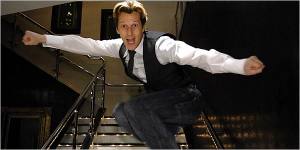 Look what was in today’s NY Times.

Except for the muscles rippling under his form-fitting dress shirt, Magnus Scheving at first glance bears little resemblance to Sportacus, the hyperactive, health-promoting hero he plays in the international hit childrenâ€™s television program â€œLazyTown.â€

But both he and his alter ego are devoted to a single, impassioned cause: getting couch potato-prone children to exercise, eat good food and generally lead healthier lives. And somehow Mr. Scheving, the creator and chief executive of the vast entertainment and licensing company known as LazyTown Entertainment, has become one of Icelandâ€™s best-known figures and biggest exports, a sui generis hybrid of Jack LaLanne and Richard Branson.

This is who I worked for in Iceland. You can read the rest of the article about Magnus at the NY Times website.