In Shades of Milk and Honey

, when Jane first sees the professional glamourist, Mr. Vincent, she describes him as, “Tall, and very broad of chest. His hair was chestnut and curled about his head like Bacon’s portrait of Jean- Baptiste Isabey.”

In Glamour in Glass 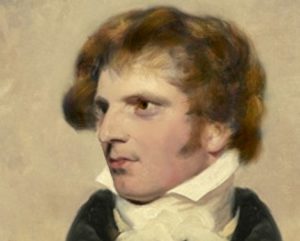 His brown curls were tousled in the fashionable wind- swept look which so many men struggled to attain, but which came naturally to him.He swept his hands through his hair so much, knotting them in place while he thought, that it was permanently dishevelled.

Note the word wind-swept? It is one of three places I knowingly cheated with the language. That word does not get coined until 1932, but the description for the hairstyle from the period was… not particularly helpful to a modern reader.

Would you have known what I meant by the “frightened owl” hairstyle?