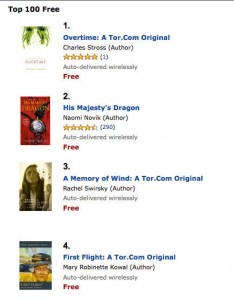 I think I mentioned that Tor.com had released their nominated fiction for free on various platforms. This included my novelette, “First Flight

”
Apparently, it hit the #4 slot on Amazon for free downloads. Not for free SF, but for overall fiction.

As you can see, three of other Tor downloads are also on there, which is pretty awesome. I’ve been told that this means that 60,000 people, on Kindle alone, downloaded the stories in the first week.

This boggles my mind.

It’s also available for the iPhone now, if you have one. (also, check out this screenshot.) 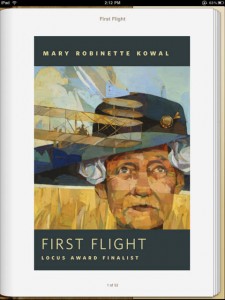 This is what it looks like on the iPad’s Kindle app.  Many thanks to Dierdre for sending that over to me.

I just downloaded it to my Nook and I have to say that it is very nicely formatted. I’m not sure what I’m going to do with the story on the Nook, but it’s nifty to have there.

Have I mentioned how very odd I find the whole thing. In part, I suspect, because I just finished these auditions where the act of creation — even an audition performance — is so directly linked to the audience reaction, which makes the connection between writer and reader seem… I mean, it’s just really hard to get my head around how many people have this story now.