My short story, First Flight, is up at Tor.com. It has absolutely goooooorgeous art by Pascal Milelli, which looks enough like my actual grandmother that my mom was disappointed that she didn’t have earrings on.

Why is it cool that she looks like my grandmother?  Because she’s based on Grandma, even if the name isn’t the same. My grandmother, is still alive, well, and sharp as anything. She was born in 1905. 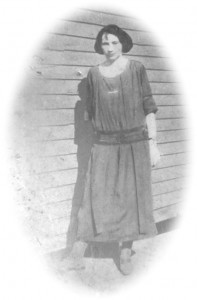 I got the story idea because we were sitting around talking about things she had seen and it is staggering.  She remembers World War I, for crying out loud, and the Titanic.  Anyway, when she turned 100, she said, “I figure the Good Lord put everyone on this earth for a reason. I just haven’t done my yet, so I better get busy.”

To celebrate, I’d like to share these recipe cards with you.  I made them for Grandma’s 101st birthday and they are some of my favorite things she makes.

Here’s a teaser of First Flight.

Her corset made her ribs creak with every breath. She’d expected to hate wearing the thing, but there was a certain comfort from having something to support her back and give her a shape more like a woman than a sack of potatoes.

A gust of air puffed around her and the steel box was gone. She stood in a patch of tall grass under an October morning sky. The caravan of scientists, technicians and reporters had vanished from the field where they’d set up camp. Louise inhaled with wonder that the time machine had worked. Assuming that this was 1905, of course—the year of her birth and the bottom limit to her time-traveling range. Even with all the preparations for this trip, it baffled her sense of the order of things to be standing there.

So, go on, read about my Grandma.