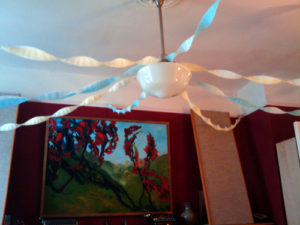 As part of the month of birthday experiences, I threw a Favorite Childhood Food Potluck. The rules were that you could bring the actual item or a grown up rendition of it. It was a tremendous amount of fun, but not clearly thought through. Why? Because everyone’s favorite childhood food was a dessert.  We had an entire table of sweet, sweet desserts.

There were two notable exceptions. Liz Gorinsky made a homemade version of Stouffer’s frozen macaroni and cheese that was a god send in the midst of all that sugar. It vanished very quickly. My favorite visual memory of the evening came after everyone had left and Rob picked the giant serving spoon, scraping the edges of the tin to get out the last of the mac and cheese. The spoon was so oversized that he totally looked like a small child.

The other exception was one of my favorites, shrimp cocktail.Â  Apparently, when I was very little, I loved it. Mom tells this story about putting away my sweater after some part and discovering, in the pockets, handfuls of shrimp. Upon questioning, I explained that I was saving them for later. Fortunately, I didn’t feel the need to recreate that entire dish: Day Old Shrimp with Finely Shredded Cotton Fibers.