Sean Grigsby is joining us today with his novel Smoke Eaters. Here’s the publisher’s description:

When dragons rise from the earth, firefighters are humanity’s last line of defense, in this wild near-future fantasy.

Firefighter Cole Brannigan is on the verge of retirement after 30 years on the job, and a decade fighting dragons. But during his final fire call, he discovers he’s immune to dragon smoke. It’s such a rare power that he’s immediately conscripted into the elite dragon-fighting force known as the Smoke Eaters.  Retirement cancelled, Brannigan is re-assigned as a lowly rookie, chafing under his superiors. So when he discovers a plot to take over the city’s government, he takes matters into his own hands. With hundreds of innocent civilians in the crosshairs, it’s up to Brannigan and his fellow Smoke Eaters to repel the dragon menace. 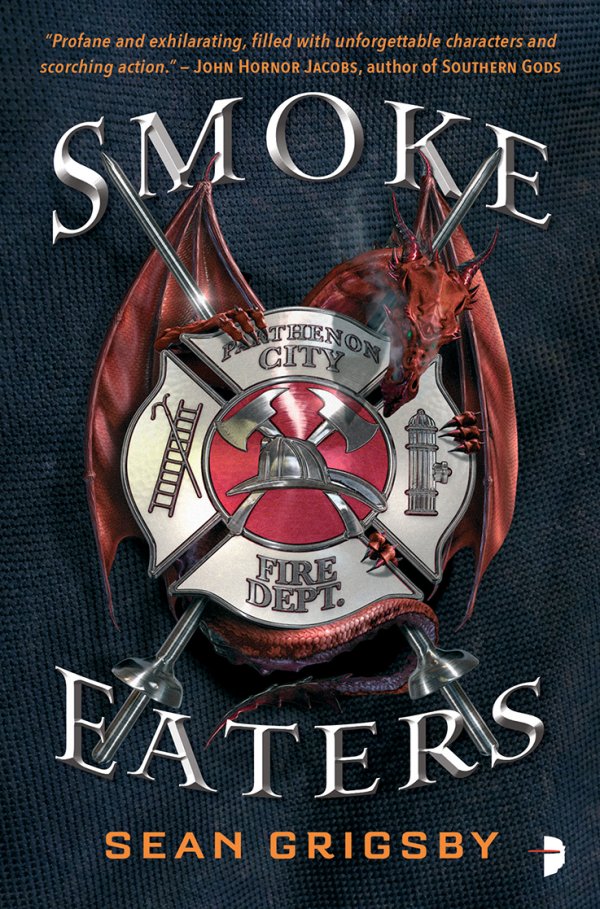 I loved Ghostbusters as a kid.

Granted, I didn’t understand the adult humor and innuendos as a five-year-old, and seeing Dan Akroyd have his pants unzipped by an invisible specter was very confusing and likely subconsciously damaging to my young mind.

But the proton packs and laser traps! The different kinds of ghosts and seeing the boys in brown sliding down the pole before they jumped into Ecto-1 and sped down the streets of New York as their tangy sirens filled the air!

It’s probably what influenced me to become a firefighter. Yeah, that sounds weird to some of you, but look at it: the Ghostbusters live in a firehouse, they respond in a light-flashing, siren-wailing rig whenever they’re called, they wear heavy packs, and they fix problems by shooting streams at them.

A little Freudian, too, I guess.

It’s also what might have inspired me down the path of a speculative fiction writer. And this brings us to my favorite bit in my debut novel, Smoke Eaters. There are so many to choose from.

Sure, in a book that’s described as firefighters vs. dragons, you might expect me to talk about all the cool fire breathers or even the volatile corporate robots, but I want to talk about an aspect of the book you might not know at first glance.

In the book, wraiths are the ghosts of people killed by dragons, and they serve a very important purpose to their murderers.

When I first set out to write the book, I had an image of a wraith—much like the angry library ghost in the aforementioned film—floating across a barren, ash-covered landscape. I had no idea at the time what ghosts would have to do with dragons, but my creative philosophy is: go with it. And so I did.

My favorite bit in SMOKE EATERS is a scene where Cole Brannigan watches an instructional video out of Canada, starring the fictional mad scientist, Professor Poltergeist. The professor explains that wraiths serve as a way to protect the eggs dragons have laid in enormous ash piles.

The smoke eaters may be getting a good handle on how to dispatch a dragon, but when it comes to wraiths, their current standard operating procedure is: run!

But, without giving too much away, the wraiths are being used for a sinister purpose in drawing dragons to certain areas, effectively burning down the neighborhood. Brannigan knows something is up, and he doesn’t have long to find out who’s behind the ghostly arson.

Writing this book was a blast, and I’m happy I got to mix my career fire knowledge with the imagination of that five-year-old kid, whose parents had to reassure him no ghost would disrobe him in the middle of the night.

They had better things to do.

Sean Grigsby is a professional firefighter in central Arkansas, where he writes about lasers, aliens, and guitar battles with the Devil when he’s not fighting dragons.