Paolo Bacigalupi is here today to talk about his novel with Tobias Buckell, Tangled Lands. Here’s the publisher’s description:

From award-winning and New York Times bestselling authors Paolo Bacigalupi and Tobias Buckell comes a fantasy novel told in four parts about a land crippled by the use of magic, and a tyrant who is trying to rebuild an empire—unless the people find a way to resist.

Khaim, The Blue City, is the last remaining city in a crumbled empire that overly relied upon magic until it became toxic. It is run by a tyrant known as The Jolly Mayor and his devious right hand, the last archmage in the world. Together they try to collect all the magic for themselves so they can control the citizens of the city. But when their decadence reaches new heights and begins to destroy the environment, the people stage an uprising to stop them.

In four interrelated parts, The Tangled Lands is an evocative and epic story of resistance and heroic sacrifice in the twisted remains surrounding the last great city of Khaim. Paolo Bacigalupi and Tobias Buckell have created a fantasy for our times about a decadent and rotting empire facing environmental collapse from within—and yet hope emerges from unlikely places with women warriors and alchemical solutions. 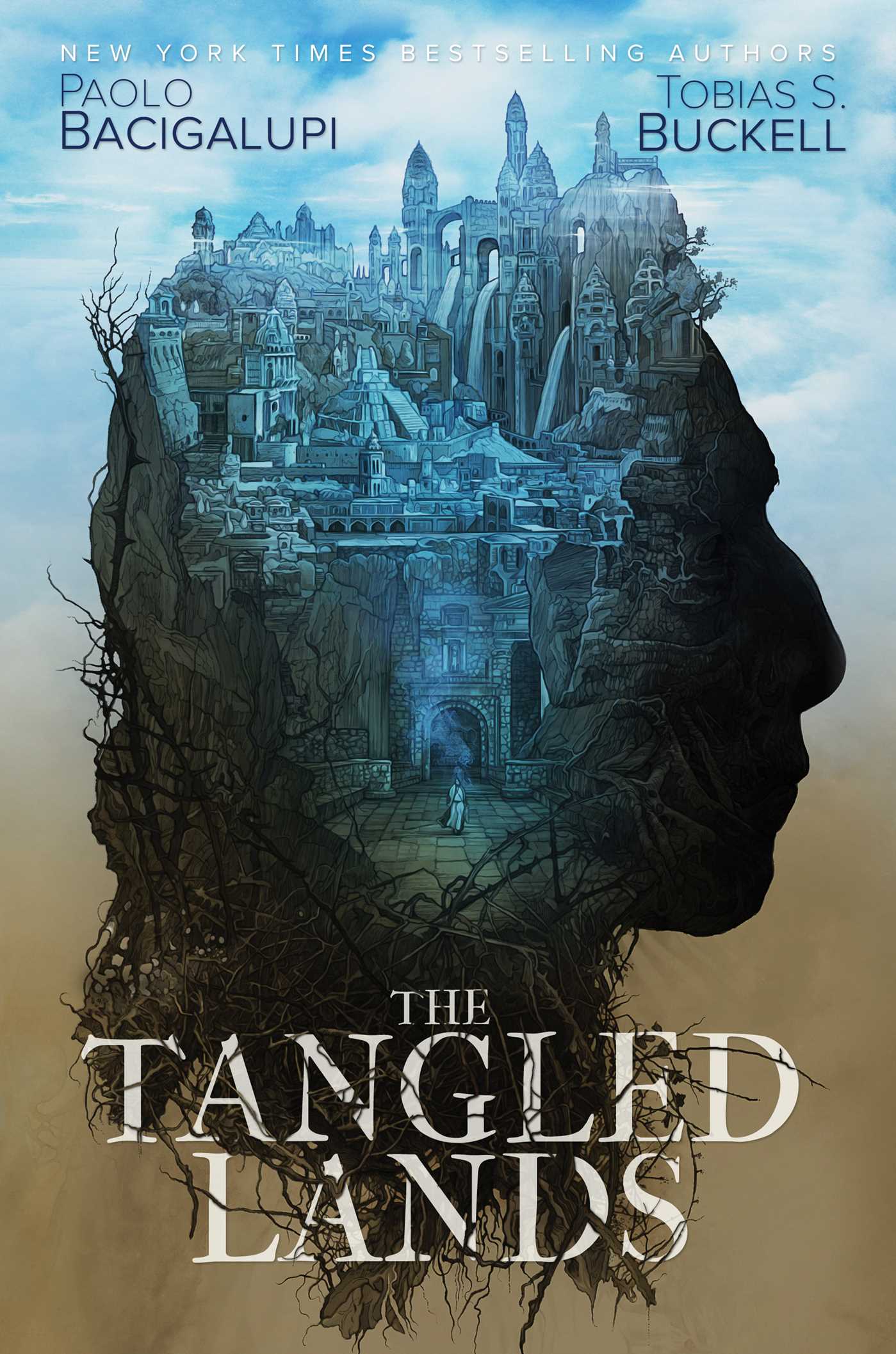 My favorite bits of stories tend to be discovered objects, excavated mid-sentence, as much a surprise to me as (hopefully) to the reader.  With THE TANGLED LANDS, Tobias Buckell and I created a world where magic has a price, but not a price the spellcaster pays personally.  Whenever a person casts magic, a bit of bramble grows, fertilized by the release of magic into the world. Bramble, a thorny-vined menace that sprouts from roof beams and in farmer’s fields, is everywhere by the time THE TANGLED LANDS takes place—whole empires have been entombed under thickets of the stuff, and if someone touches it, they are stung quickly into an unending slumber, never to awaken again.

This initial idea of magic, it’s price, and the looming, ever-present bramble was fun for us to work with, to create this world where magic has a terrible price and yet there was *always* a good reason to use just a little more magic. It made for ethical conundrums and complicated moral moments. So of course we’re pleased with the general premise of the story, and the many people who live in the city of Khaim, trying to find a way to survive.

But for me, a story comes to life when the general premise becomes specific—personal.  If bramble is everywhere, and people are always being stung by it, and always falling into unending slumber, well, what happens to them then? What happens to all those bodies? Do we keep them close and protect them? Do we toss them in the river, even though they’re only sleeping forever, and not actually dead? Do we sell them off to the soft-eyed men? (Ew.) Who has the money and time and attention to protect these bramble-kissed bodies from rats and roaches and dogs? Do we keep them in our homes or dump them on the streets?

These questions that arise end up forming the life of the story, and become my favorite bits.  One of those, for me, takes place at a dinner party, where a wealthy merchant has been kissed by bramble, and yet everyone carries on, pretending that he has not been paralyzed into unending sleep. They dress him, they wash him, they wheel him out for dinner…

Mop remembered the patriarch presiding, artfully tied to his chair so the old man didn’t flop face first into each course as it was set before him.

Topaz jeweled straps had circled the patriarch’s forehead. More clasped his wrists. Another strap, barely glimpsed, around his chest and under his arms, threading through carefully tailored holes in the back of his dinner jacket where the servants could secure him to the chair. And all around him, Falizi guests ate and drank and toasted the patriarch, everyone pretending that he was one of the living.

Mop remembered the Falizi family’s embarrassment when a butterfly emerged, fluttering, from his ear.

I love this moment for how it underlines how badly the people of Khaim are adapting to their situation. That they go on, trying to pretend that everything isn’t wrong, even as things get worse and worse for them. And then a butterfly takes wing, and their artful pantomime of normalcy is shattered.

In any given story if you’re lucky, a number of these sorts of bits will emerge—unbidden, wild, strange—and they make the fabric of the story richer for their emergence. Sometimes bizarre, sometimes embarrassing, but if they’re good, they’re always a surprise, much like a butterfly popping out of a sleeping merchant’s ear to spice up an otherwise boring dinner party.