Sarah Kuhn is joining us today with her novel Heroine Complex. Here’s the publisher’s description:

Being a superheroine is hard. Working for one is even harder.

Evie Tanaka is the put-upon personal assistant to Aveda Jupiter, her childhood best friend and San Francisco’s most beloved superheroine. She’s great at her job—blending into the background, handling her boss’s epic diva tantrums, and getting demon blood out of leather pants.

Unfortunately, she’s not nearly as together when it comes to running her own life, standing up for herself, or raising her tempestuous teenage sister, Bea.

But everything changes when Evie’s forced to pose as her glamorous boss for one night, and her darkest secret comes out: she has powers, too. Now it’s up to her to contend with murderous cupcakes, nosy gossip bloggers, and supernatural karaoke battles—all while juggling unexpected romance and Aveda’s increasingly outrageous demands. And when a larger threat emerges, Evie must finally take charge and become a superheroine in her own right…or see her city fall to a full-on demonic invasion. 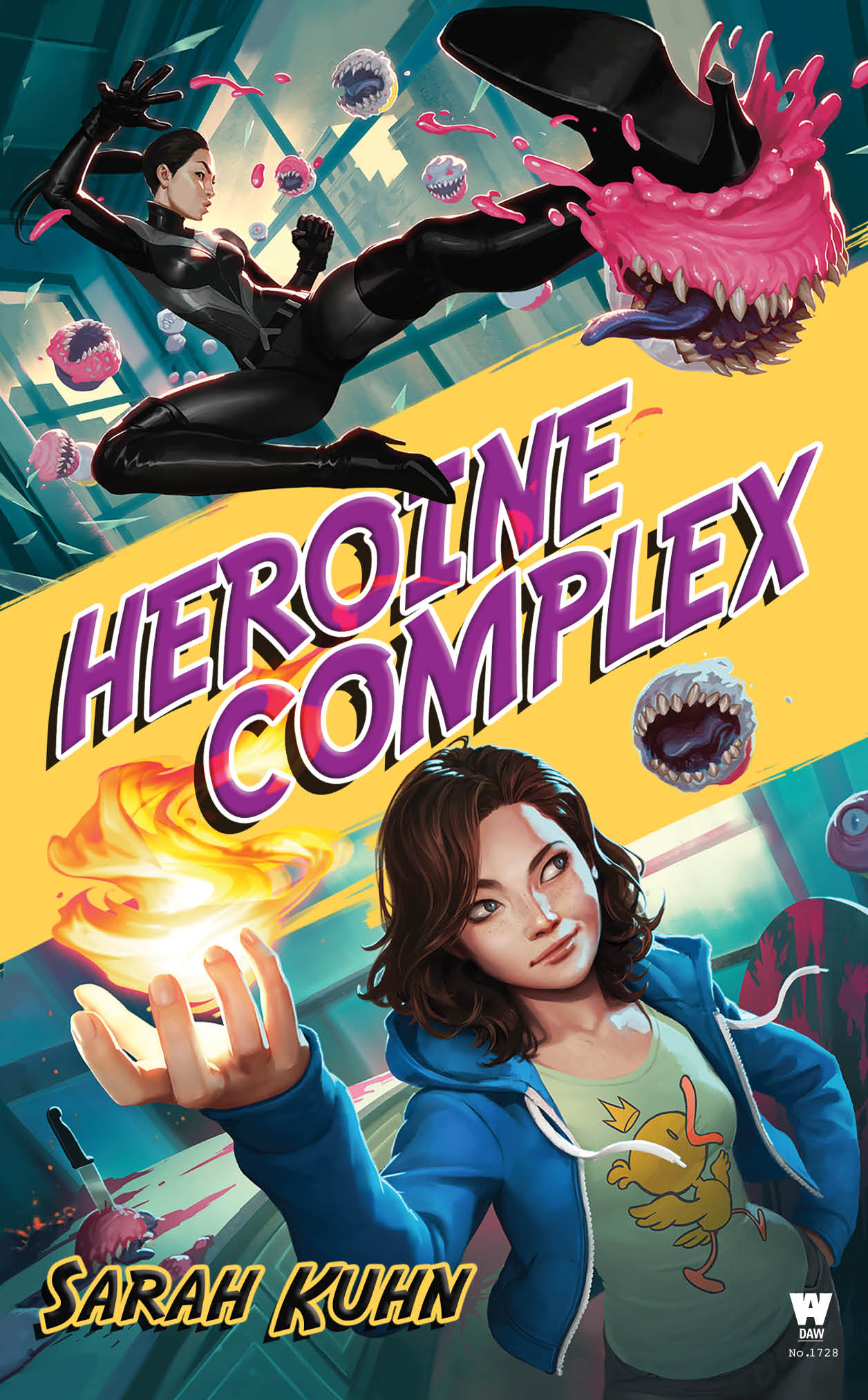 Please note: this does not mean I am a good singer. Anyone who has ever been forced to listen to me try to harmonize with myself during a stirring rendition of TLC’s “No Scrubs” will tell you the exact opposite is true. Thankfully, enthusiasm counts for a lot in karaoke and I am really good at enthusiasm. I’ve rallied crowds through totally off-key Britney Spears covers using nothing more than a few well-placed hand claps and a heaping serving of bravado. And I’ve seen other musically challenged performers do the same. To me, that’s the key to karaoke’s appeal: for a brief, shining moment—those three minutes of perfect pop—anyone can be a star.

When I was writing Heroine Complex, I knew I wanted my fabulous Asian American superheroine protagonists to have big, colorful fight scenes that were outrageous, funny, and a ton of fun. One of the climactic fights features Evie Tanaka—a former sidekick coming into her own as a bona fide heroine—facing off against her foe in a supernaturally enhanced karaoke battle.

I loved this idea for a few reasons. First of all, it’s the kind of challenge that’s horrifying to someone like Evie, who’s comfortable staying in the background and on the sidelines. As she’s forced to rally and find her inner karaoke star bravado, her heroic side starts to come out and she finally begins to find the confidence to stand up for herself and fight for what she believes in.

Second, while “karaoke battle against demonic forces” obviously has an element of the ridiculous, the stakes involved mean our heroes must treat karaoke very seriously. And while I believe karaoke should be fun above all else, I also believe it should be done earnestly rather than ironically—when I sing Britney, I mean every word. And when Evie takes on some of pop music’s other great masters, she does too.

Finally, writing this kind of battle is just pure fun. I love sing-offs, dance-offs (hmm, maybe a dance-off in the sequel?), and pretty much any kind of “-off” involving the creative arts. Writing a fight scene where superheroes have to use killer dance moves, stage presence, and vocal range—rather than punches, kicks, or actual superpowers—to vanquish evil puts a big, stupid grin on my face and allows me to let my imagination go to some truly weird places.

The resulting scene in question is too spoilery for me to share, so I’ll just tell you some of the key songs involved.

*“Single Ladies” by Beyoncé: Beyoncé’s songs are really some of the ultimates when it comes to aspirational karaoke jams. This one has the added bonus of being accompanied by well-known dance moves for Evie to utilize. Somewhere there exists a terrible iPhone video of me and a friend attempting these dance moves during our own (drunk) karaoke attempt. Do not try to find it.

*“I Want It That Way” by Backstreet Boys: You can put some real high school prom slow dance soul into this jam. I have also performed this one with a friend, to great acclaim—the karaoke place we were at didn’t have both parts cued up during the “tell me why” section and we sang them anyway.

*“Eternal Flame” by The Bangles: Shockingly, I have never performed this one, but I totally recommend looking up the clip from The Vampire Diaries where Caroline Forbes uses her vampire powers to compel a band to play it for her so she can have a big rock star moment and woo the guy she likes. It’s every beautiful karaoke fantasy in one amazing scene. In Heroine Complex, Evie has a special connection to this song—it  recurs a few times throughout the book. And in the end, it’s the song that helps her finally shed the assistant mantle and find her true karaoke stardom.

Sarah Kuhn is the author of Heroine Complex—the first in a series starring Asian American superheroines—for DAW Books. She also wrote The Ruby Equation for the Eisner-nominated comics anthology Fresh Romance and the romantic comedy novella One Con Glory, which earned praise from io9 and USA Today and is in development as a feature film. Her articles and essays on such topics as geek girl culture, Asian American representation, and Sailor Moon cosplay have appeared in The Toast, Uncanny Magazine, Apex Magazine, AngryAsianMan.com, IGN.com, Back Stage, Geek Monthly, The Hollywood Reporter, StarTrek.com, Creative Screenwriting, and the Hugo-nominated anthology Chicks Dig Comics. In 2011, she was selected as a finalist for the CAPE (Coalition of Asian Pacifics in Entertainment) New Writers Award. You can visit her at heroinecomplex.com or on Twitter: @sarahkuhn.