Randy Henderson is joining us today with his novel Finn Fancy Necromancy. Here’s the publisher’s description.

Finn Gramaraye was framed for the crime of dark necromancy at the age of 15, and exiled to the Other Realm for twenty five years.  But now that he’s free, someone—probably the same someone—is trying to get him sent back.  Finn has only a few days to discover who is so desperate to keep him out of the mortal world, and find evidence to prove it to the Arcane Enforcers.  They are going to be very hard to convince, since he’s already been convicted of trying to kill someone with dark magic.

But Finn has his family: His brother Mort who is running the family necrotorium business now, his brother Pete who believes he’s a werewolf, though he is not, and his sister Samantha who is, unfortunately, allergic to magic.  And he’s got Zeke, a fellow exile and former enforcer, who doesn’t really believe in Finn’s innocence but is willing to follow along in hopes of getting his old job back. 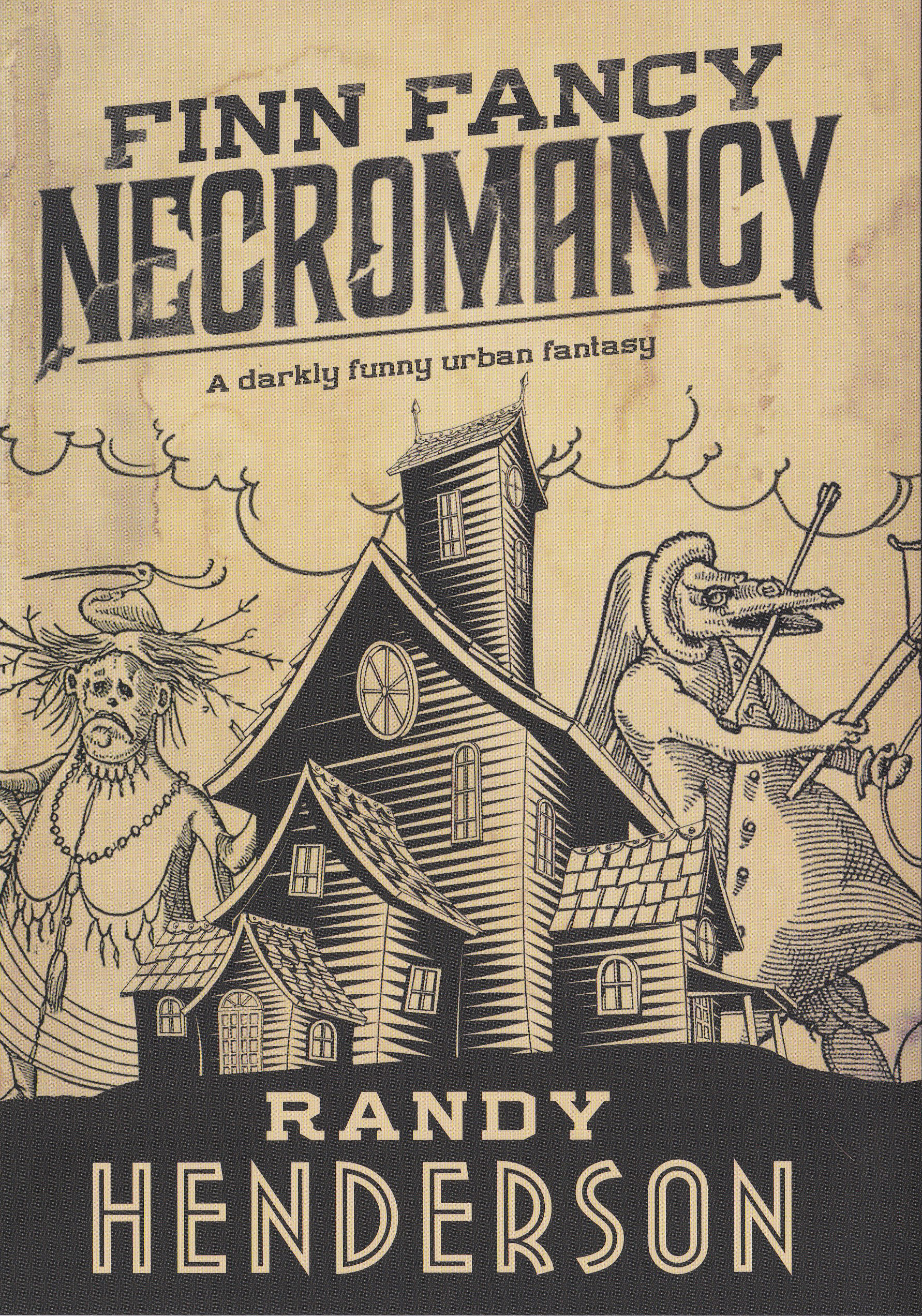 My favorite bit about Finn Fancy?  Well, first, thank all the gods and goddesses (and four out of five dentists who chew gum) that I still love so many bits of Finn Fancy.  Because I’m (blessedly) stuck with this book, and this series, for a while.  And that was kind of the whole point — loving it I mean, not being stuck with it.  Though I almost made a terrible, terrible mistake.

You see, I’d written a Young Adult fantasy before Finn Fancy.  I chose to write it as a YA because, let’s face it, YA is hotter right now than a Marvel movie about a radiated jalapeno.  Problem was, when I started, I hadn’t read much YA.  So I was really forcing it, writing to a form and style that wasn’t natural to me.

Thankfully, that turned out … not great.  And it only took me about two years to realize my mistake and move on.

So Finn Fancy was all about writing something I would have fun writing, and that I truly loved.  And one of the things that made it fun for me was the dialogue.  I love when Finn interacts with his whacky cast of supporting characters, because it’s like I am having a conversation with them.

The best thing I did for Finn was cram his world full of family, friends, and creatures to interact with.  Because that means I get to interact with them.  And that’s really my favorite bit.

Here’s two samples.  The first is with perhaps my favorite character, Pete.  Petey is Finn’s younger brother who thinks he is a werewolf due to a childhood dog bite (even though he really isn’t).  It is one of the first real conversations Finn has with Pete after returning from twenty-five years of exile in a fairy Other Realm.  Mort is their older brother.

There was a long silence while Pete sat hunched over the pillow in his lap like a bear embracing its cub, then he said in a quiet voice, “If I ask you something, promise not to laugh?”

“Promise?  Because Mort would just laugh.”

“Okay.  Will you help me find a girlfriend?”

I laughed.  “I’m sorry.  I just — a girlfriend?  What makes you think I can get you a girlfriend?  I’ve never had one myself, not really.  Besides, I just got back from exile.  I don’t know anyone.”

He looked up with his wide, puppy eyes.  “Yeah, but you’re my brother,” he said, as if that explained everything.

And I guess it did, in a way.  As much as I might have teased Petey growing up, I’d also been the one to protect him from the worst of Mort’s pranks, to let Petey play games with me and my friends, and the one he came to when he had problems.  I’d always been his big brother – even though he was the one who protected me when it came to bullies — and clearly exile hadn’t changed that.

After all the things about my life and the world that I’d found changed in the last few hours, all the things I’d realized were lost to me during my exile, Pete’s trust in me as his big brother was comforting, and I found myself wiping tears from my cheeks.

I cleared my throat.  “Are there any girls you like?”

“No,” Pete said, then looked down.  “Well, yes, but they’re mundy girls, you know?  And besides, there’s my monthly visitor.”

I sighed.  “Pete, I thought I told you not to call it that.”

“Okay,” Pete said.  “Well, how am I supposed to date anyone with my wolf time?  What if I scratch or bite her?”

I resisted the urge to ask him what exactly he thought dating involved.

Finally, this next snippet of dialogue between Finn and another of my favorite characters, Zeke, is tied to the last (and felt appropriate for Mary’s blog).  Zeke is an exile from the 1980s like Finn, and an ex-cop of the magical world who had to maintain a macho persona during his days on the force.  He also has a bit of a Mr. T fixation.

“So,” Zeke said.  “You’re going on a double date while someone’s trying to kill you?”

“Yes, I am,” I replied.  “Whoever’s out to get me, they’ve already taken twenty-five years of brotherhood away from me and Pete.  I’m not going to let them take any more.”

Zeke headed for the hallway to our left.  “Fine, little miss Emma, you go play matchmaker and I’ll keep trying to get us clear of this mess.”

“Wait, did you just make a Jane Austen reference?”

Zeke paused, then resumed walking .  “The only Austen I know is Steve Austin, the six million dollar man.”

I followed after him.  “I do.  My mother used to read Jane Austen, and I’m pretty sure –”

“I’m pretty sure you’d better drop it, fool!  If Steve Austin ever writes a book –”

“Wait, the character, or the actor?”

“—writes a book about his adventures kickin ass, and they make it into a movie starring Chuck Norris, then you go right ahead and bring up the name Austen again.”