Mur Lafferty is joining us today to talk about Bookburners. Here’s the publisher’s description:

The critically acclaimed urban fantasy about a secret team of agents that hunts down dangerous books containing deadly magic—previously released serially online by Serial Box, now available in print for the first time!

Magic is real, and hungry. It’s trapped in ancient texts and artifacts, and only a few who discover it survive to fight back. Detective Sal Brooks is a survivor. She joins a Vatican-backed black-ops anti-magic squad—Team Three of the Societas Librorum Occultorum—and together they stand between humanity and the magical apocalypse. Some call them the Bookburners. They don’t like the label.

Supernatural meets The Da Vinci Code in a fast-paced, kickass character driven novel chock-full of magic, mystery, and mayhem, written collaboratively by a team of some of the best writers working in fantasy. 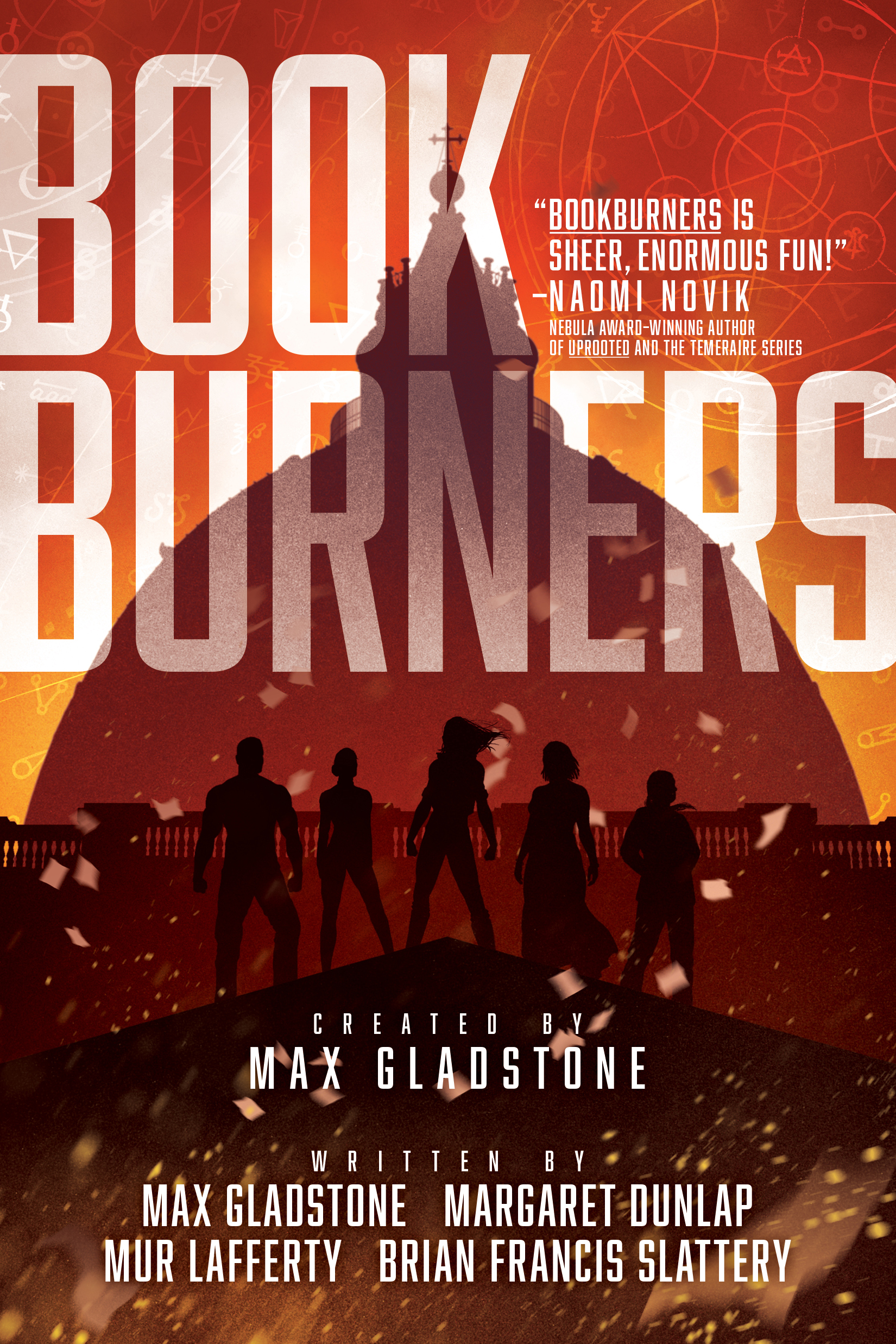 Bookburners was tons of fun to work on. I’d never collaborated before, and now I was thrown into a writing room, working with three very talented authors. Once we had hashed out what each episode would be about, we politely discussed and sometimes passionately claimed the episodes we wanted to write.

I’d love to tell you about all of my episodes, but one bit that I really liked crafting was the restaurant scene in Episode 4: A Sorcerer’s Apprentice. (Spoilers below.)

A bit of backstory; my dungeon master in college refused to let us play Evil characters, which I thought was unfair. I loved the concept of Lawful Evil: having a strict code you abide by, but your movements within that code can be evil. The vigilante murderer Dexter is lawful evil. He kills people with no remorse, but only certain kinds of people. Dwight Schrute from The Office is Lawful … he’s not evil, but definitely Annoying: he will make life hard for others, but he backs down without question when someone of a higher rank tells him to.

When I came up with the answer of how to fix the problem of Episode 4, how Sal and her team would handle the gluttony demon and the kitchen made of meat, at first I thought it was too simple. But kitchens run on a strange kind of “lawful” code (I called it “chaotic order” in the story) that most non-restaurant people can’t follow. It looks chaotic to an outsider, but the dishes all get out. If chaos reigns, then dishes go out with raw meat, or without sauce, or the wrong dish goes to the wrong table. Kitchens abide by rules, and over time they’ve developed their own language.

The menu is holy. The list of specials is law. Communication is vital. Break any one of these things, and the core machine that is a working kitchen begins to fall apart.

I realized that a lawful demon working with a strict setting like a kitchen would have to abide by its rules. So the commands to “86” (we’ve run out of that food, or it’s no longer on the menu) something will be obeyed. How can you disobey an 86? “I don’t care that we’re out of salmon, I’m going to make it anyway?” Nope. Everyone must abide by a call of 86.

Grace was distracting the demon and keeping it busy, but she wasn’t defeating it. Sal needed to sever the demon’s connection with the book, so she 86’d the specials list.

This episode was meant to illustrate a few things in the developing group dynamic: Sal proves her loyalty to Asanti, as does the rest of the team, eventually. Sal also shows herself to be a quick thinker among the team. Since this is an ensemble cast, people have asked me, half-joking, who the “thief” or the “brains” are – referencing the television show Leverage or a basic D&D party. But those roles don’t quite fit our characters.

I like that a lot of our characters do double-duty. Grace is the muscle, but Sal and Liam can hold their own. Intelligence-wise, Menchu is the brilliant leader, and Asanti is the researcher (alongside Liam, while one does books and the other does the Internet), but Sal takes this season to forge her own place as an innovator, the quick thinker.

Each character is layered with several skills and weaknesses. There isn’t one “hitter” or “tank” or “cleric.” As you’ll see in future episodes, the team will not always be the five of them together, and two or three people may go off and do a mission.

Sal and her background, plus her detective’s mind, keep her and the team alive in this adventure, even though it was Asanti’s reluctance to involve the team that put them in danger in the first place.

And let’s touch on Asanti. This character gets a slow introduction, seeming to be the one sitting at home in a lot of situations. I wanted to take her out on her own mission with this episode, reveal some of her past, and show her problematic view of magic and how it conflicts with the rest of the team.

Essentially, if you haven’t been stabbed with a sword, you’re more likely to consider it beautiful. Even if you know someone with missing fingers.

For the record, I don’t classify all of my characters with D&D alignments. But I’d definitely classify Asanti as Neutral Good. You’ll see why later.

MUR LAFFERTY is the author of The Shambling Guides series from Orbit, including the Netfix-optioned The Shambling Guide to New York City and Ghost Train to New Orleans. She has been a podcaster for over 10 years, running award-winning shows such as I Should Be Writing and novellas published via podcast. She has written for RPGs, video games, and short animation. She lives in Durham, NC where she attends Durham Bulls baseball games and regularly pets two dogs. Her family regrets her Dragon Age addiction and wishes for her to get help. She tweets as @mightymur. Bookburners, which she wrote with Max Gladstone, Margaret Dunlap, and Brian Francis Slattery, is available from Saga Press in February.
Did you know you can support Mary Robinette on Patreon!