Fonda Lee is joining us today with her novel Exo. Here’s the publisher’s description:

It’s been a century of peace since Earth became a colony of an alien race with far reaches into the galaxy. Some die-hard extremists still oppose alien rule on Earth, but Donovan Reyes isn’t one of them. His dad holds the prestigious position of Prime Liaison in the collaborationist government, and Donovan’s high social standing along with his exocel (a remarkable alien technology fused to his body) guarantee him a bright future in the security forces. That is, until a routine patrol goes awry and Donovan’s abducted by the human revolutionary group Sapience, determined to end alien control.
When Sapience realizes whose son Donovan is, they think they’ve found the ultimate bargaining chip . But the Prime Liaison doesn’t negotiate with terrorists, not even for his own son.  Left in the hands of terrorists who have more uses for him dead than alive, the fate of Earth rests on Donovan’s survival. Because if Sapience kills him, it could spark another galactic war. And Earth didn’t win the last one . . . 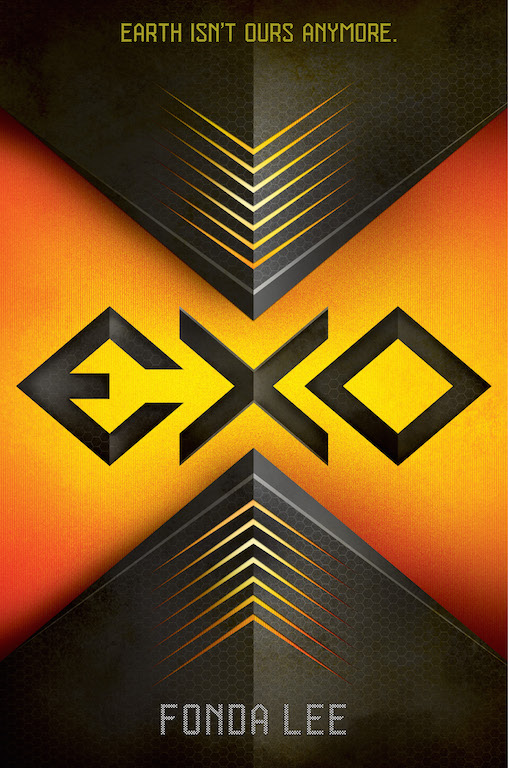 One of the things I enjoy the most about writing science fiction and fantasy is inventing words for things that don’t exist in real life. My YA sci-fi novel, Exo releases from Scholastic Press this week and my favorite word in the entire book is one that I made up: panotin.

In the world of Exo, certain humans have adopted alien biotechnology that gives them an organic body armor that they can manipulate at will. I imagined this super tough but pliable alien material would have a woven texture made out of many threads of some substance stronger than spider silk. I needed to give a name to this stuff that made it sound like a pseudo-natural part of the human body and evoked the image and ideas I was going for.

I took inspiration from an existing word: keratin. Keratin is the fibrous structural protein found widely in many living creatures. It makes up the outer layer of human skin and is the key component of hair and nails. It forms the horns, claws, and hooves of mammals, the scales and shells of reptiles, the beaks and claws of birds. The word keratin is derived from the Greek word kéras meaning horn, and the –in suffix, denoting a chemical compound.

From there, it wasn’t a far leap for me to come up with my own Greek-derived word to serve my story needs. The special substance I’d imagined would function as built-in body armor, so I turned to Google Translate and found that the Greek word for armor is panoplía. A little more Internet searching told me that the Greek name Panos means ‘rock.’ Perfect!

“Panotin” was exactly the made-up term I needed for my story. There was one final thing I had to do: Google it make sure it wasn’t already a real word in another language or the brand name of some company or product I’d never heard of. Thankfully, a Google search turned up only a few Facebook and Tumblr accounts from people with unusual surnames. I was good to go!

Like most SFF writers, I’ve made up plenty of words and names for my futuristic and fantasy worlds, and it’s a part of the process that seems small in the grand scheme of storytelling but that I find both vital and incredibly fun. In Exo, the actual armor system (comprised of panotin) is called an “exocel,” a word that sounds like “exoskeleton” but also “cellular.” I imagined the alien race in my story having a musical language with many strumming and whistling sounds, so I named them the “zhree,” and their key unit of social structure is the “erze.” I wanted to create more distinguishing differences between the humans who collaborate with the zhree and those that don’t, so I decided the aliens would prefer unique human names that they could translate into longer, more easily remembered strings of notes in their own language, hence: Donovan, Thaddus, Tamaravick, Leonidas, and my favorite, Vercingetorix. The humans who weren’t part of this system, the ones who oppose alien governance, had names like Saul, Kevin, and Max.

(I must pause to mention my favorite word from my first novel, Zeroboxer. It’s “brandhelm.” I love this word. It conveys the precise meaning I intended, and is so much more elegant a title than something like, “personal marketing manager.” In fact, why isn’t it a word already?)

Creating words is a creative exercise that must nevertheless grounded in logic. Words and names have origins and their sounds evoke connotations. When done properly, the reader accepts these skillfully invented words into story usage with barely a second thought and little reflection upon the work and deliberation the author invested in their creation. I’m quite certain that no one (or very few people) will ever question me about the origin or logic behind the “panotin” but the word makes me smile every time I see it in the pages of my book.

Fonda Lee is the award-winning author of young adult science fiction novels Zeroboxer (Flux), which was an Andre Norton finalist, and Exo (Scholastic), a 2017 Junior Library Guild Selection. She is a recovering corporate strategist, a black belt martial artist, and an action movie aficionado. She loves a good Eggs Benedict. Born and raised in Calgary, Fonda now lives in Portland, Oregon with her family. She can be found online at www.fondalee.com and on Twitter @fondajlee.