Lara Elena Donnelly is joining us today with her novel Amberlough. Here’s the publisher’s description:

From author Lara Elena Donnelly, a debut spy thriller as a gay double-agent schemes to protect his smuggler lover during the rise of a fascist government coup

Trust no one with anything – especially in Amberlough City.

Covert agent Cyril DePaul thinks he’s good at keeping secrets, especially from Aristide Makricosta. They suit each other: Aristide turns a blind eye to Cyril’s clandestine affairs, and Cyril keeps his lover’s moonlighting job as a smuggler under wraps.

Cyril participates on a mission that leads to disastrous results, leaving smoke from various political fires smoldering throughout the city. Shielding Aristide from the expected fallout isn’t easy, though, for he refuses to let anything – not the crooked city police or the mounting rage from radical conservatives – dictate his life.

Enter streetwise Cordelia Lehane, a top dancer at the Bumble Bee Cabaret and Aristide’s runner, who could be the key to Cyril’s plans—if she can be trusted. As the twinkling lights of nightclub marquees yield to the rising flames of a fascist revolution, these three will struggle to survive using whatever means — and people — necessary. Including each other.

Combining the espionage thrills of le Carré with the allure of an alternate vintage era, Amberlough will thoroughly seduce and enthrall you.

“Sparkling with slang, full of riotous characters, and dripping with intrigue, Amberlough is a dazzling romp through a tumultuous, ravishing world.” —Robert Jackson Bennett, winner of the Shirley Jackson Award and the Edgar Award 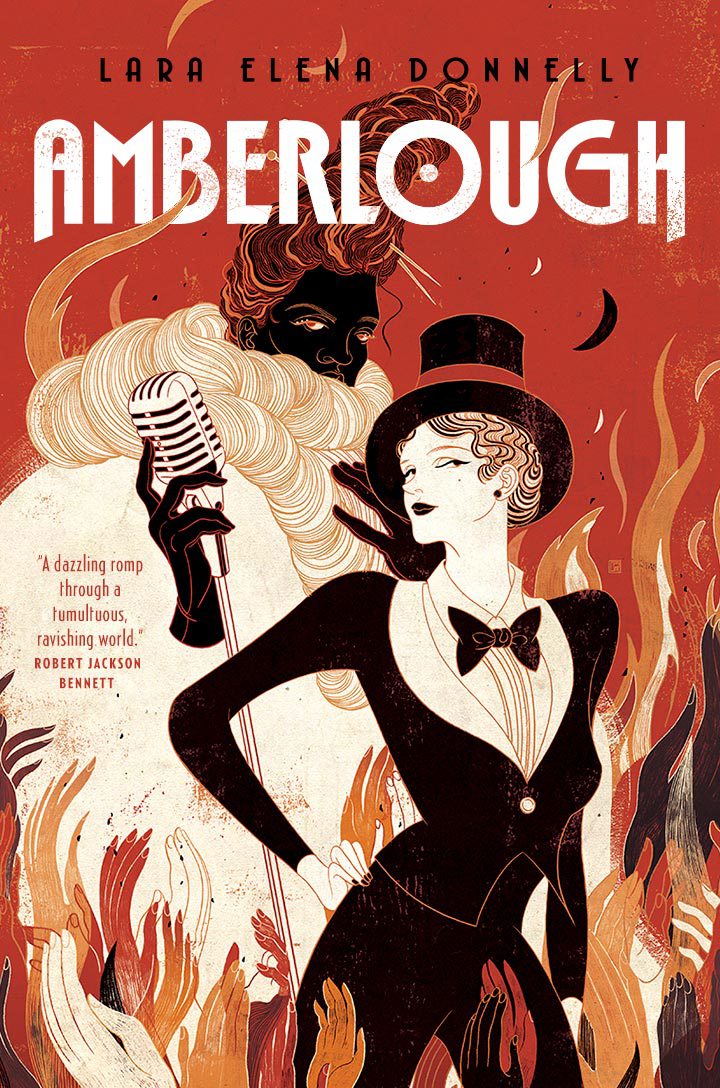 A lot of early reviews of Amberlough are calling it “shockingly timely,” pointing out the unfortunate resemblance to our current political climate, drawing comparisons to 1930s Germany. And yes, it is a political novel. It is about the dangers of fascism. It is tense and violent and dangerous, filled with amoral people making desperate decisions.

Or rather, the subtleties of writing explicit sex. Too often, these scenes reduce sex to two particular sets of parts in a straightforward mechanical act. But that’s boring, and good sex is anything but. Good sex is the whole mind and body engaged in something—anything—that brings intense pleasure. Whether that’s the whisper of breath on skin, the anticipation of a tryst or a touch, the sting of knotted hair tangled in a fist, the confidence imparted by a partner’s regard…it’s so much more than a rote specific physical act. And it’s more fun to write, the further you move from the prescribed.

I first started forming my sex scene philosophy at a Galentine’s Day party during which guests read aloud the steamy scenes from dollar store paperback romances. After a few of these, I started to notice the pacing was nearly identical. The same three acts of the same sexual encounter. The language varied (barely), but the step-by-step process and the body parts involved were exactly the same from book to book.

Given all the things that sex can be—a power play, a drunk mistake, an expression of intense emotion, an act of desperation, a bonding experience, something to do when you’re bored, or when you think that you’re going to die—it’s almost impossible to write sex that doesn’t move the story forward. When the characters are lying there afterward, sweaty and satisfied—or not, because do not get me started on the simultaneous orgasm trope—the readers should understand something new about them and their situation.

The all-singing, all-dancing Lara Elena Donnelly is a graduate of the Alpha and Clarion writers’ workshops. Her work has appeared in venues including Strange Horizons, Escape Pod, Nightmare, and Mythic Delirium. Her debut novel, vintage-glam spy thriller Amberlough, drops on February 7, 2017 from Tor Books. A veteran of small town Ohio and the Derby City, Lara now lives in Manhattan. You can also find her online at @larazontally or laradonnelly.com.