Mishell Baker is joining us today with her novel Phantom Pains. Here’s the publisher’s description:

In the second book to the “exciting, inventive, and brilliantly plotted” (Seanan McGuire, New York Times bestselling author) Borderline, Millie unwillingly returns to the Arcadia Project when an impossible and deadly situation pulls her back in.

Four months ago, Millie left the Arcadia Project after losing her partner Teo to the lethal magic of an Unseelie fey countess. Now, in a final visit to the scene of the crime, Millie and her former boss Caryl encounter Teo’s tormented ghost. But there’s one problem: according to Caryl, ghosts don’t exist.

Millie has a new life, a stressful job, and no time to get pulled back into the Project, but she agrees to tell her side of the ghost story to the agents from the Project’s National Headquarters. During her visit though, tragedy strikes when one of the agents is gruesomely murdered in a way only Caryl could have achieved. Millie knows Caryl is innocent, but the only way to save her from the Project’s severe, off-the-books justice is to find the mysterious culprits that can only be seen when they want to be seen. Millie must solve the mystery not only to save Caryl, but also to foil an insidious, arcane terrorist plot that would leave two worlds in ruins. 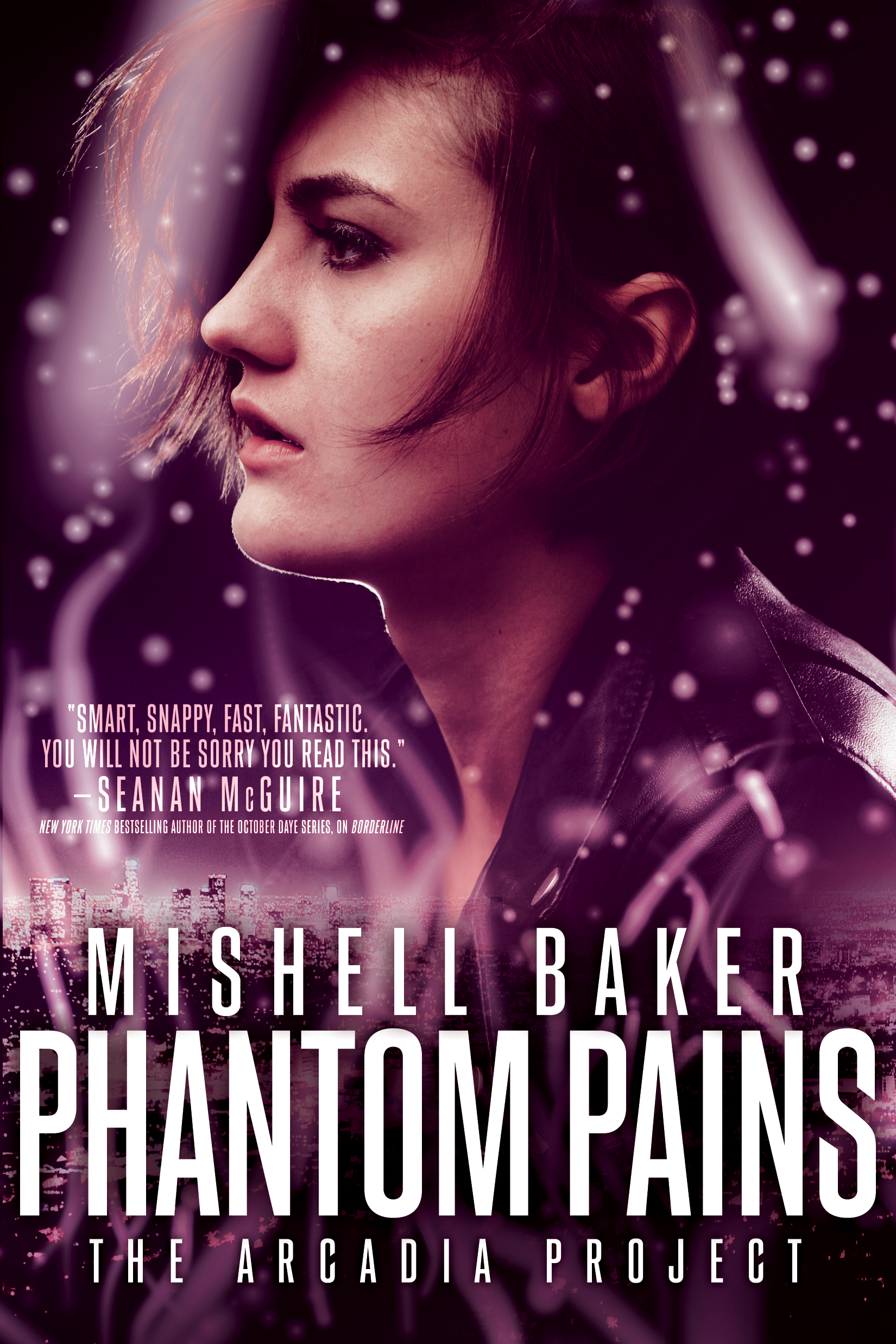 It’s hard to talk about my favorite bit of Phantom Pains, as my true favorite bits are those lovely little twists that are only fun if you get there the hard way.  Since the first twist happens pretty early on, it’s almost impossible to find a section of Phantom Pains other than transition scenes that are safe to quote without spoilers!

In a more general sense, my favorite bit about writing Phantom Pains was getting to finally explore at least a little of the history, politics, and culture of Arcadia: the alternate universe that is the secret source of all human inspiration.  In particular, the story behind what the Arcadia Project has named the Unseelie and Seelie Courts—why the “Unseelie Court” has only a King, and the “Seelie Court” only a Queen—is fascinating to me, particularly because different versions of it have filtered down through the different factions.  I wasn’t able to explore it as deeply as I wanted to, because priority goes to things that move the story along, but I’ve always been fascinated by revisionist history and the way that the victors always get to decide how the story goes.

The Arcadia Project is very much a case of “history written by those in power,” and Phantom Pains is the first book in the series where we even start to ask these questions, where we start to realize that the way everything is named, the way all the rules have been set up, are based on the mental filters of the people who do the educating and policy-making.

Arcadia is populated by what the Project calls “fey,” sometimes colloquially referred to by the London-centered organization as faeries, but more literally an entire ecosystem of aliens in a parallel world that operates by different laws of logic and physics.  The most human-like race of fey have been dubbed the sidhe by the Project, and the relationship between the sidhe and humans has been the reason for profound growth and development in both worlds.  Both the Unseelie King and the Seelie Queen are sidhe, the two “Courts” separated by a binary system of emotion-based magic, with the Unseelie representing emotions like fear and anger, the Seelie emotions like joy and love.  In Arcadia, never the twain shall meet; they’re polar forces in a sense, and both are necessary to the ecosystem.

But of course from a human perspective, the Unseelie are the “bad guys” and the Seelie are the “good guys.”  And of course the sidhe, being human analogues, are obviously head and shoulders above the other species of Arcadia.  But are they really?  How have human perspectives and baggage shaped the policy in Arcadia, and could both worlds benefit from reexamining the situation?

Phantom Pains is the first book in the series to open up this line of questioning, and that’s my favorite thing about it.  I can’t wait to find out what readers think, and what sort of theories they start to come up with as the tip of the iceberg finally starts to suggest more beneath the surface.

Mishell Baker is a 2009 graduate of the Clarion Science Fiction and Fantasy Writers’ Workshop, and her short stories have appeared in Daily Science Fiction, Beneath Ceaseless Skies, Redstone Science Fiction, and Electric Velocipede. She has a website at MishellBaker.com and frequently tweets about writing, parenthood, mental health, and assorted geekery at @MishellBaker. When she’s not attending conventions or going on wild research adventures, she lives in Los Angeles with her husband and children. Her debut novel, Borderline is currently a Nebula award finalist. Its sequel, Phantom Pains, will be available on March 21.