Michael J. Martinez is joining us today with his novel The Enceladus Crisis. Here’s the publisher’s description.

Two dimensions collided on the rust-red deserts of Mars—and are destined to become entangled once more in this sequel to the critically acclaimed The Daedalus Incident.

Lieutenant Commander Shaila Jain has been given the assignment of her dreams: the first manned mission to Saturn. But there’s competition and complications when she arrives aboard the survey ship Armstrong. The Chinese are vying for control of the critical moon Titan, and the moon Enceladus may harbor secrets deep under its icy crust. And back on Earth, Project DAEDALUS now seeks to defend against other dimensional incursions. But there are other players interested in opening the door between worlds . . . and they’re getting impatient.

For Thomas Weatherby, it’s been nineteen years since he was second lieutenant aboard HMS Daedalus. Now captain of the seventy-four-gun Fortitude, Weatherby helps destroy the French fleet at the Nile and must chase an escaped French ship from Egypt to Saturn, home of the enigmatic and increasingly unstable aliens who call themselves the Xan. Meanwhile, in Egypt, alchemist Andrew Finch has ingratiated himself with Napoleon’s forces . . . and finds the true, horrible reason why the French invaded Egypt in the first place. 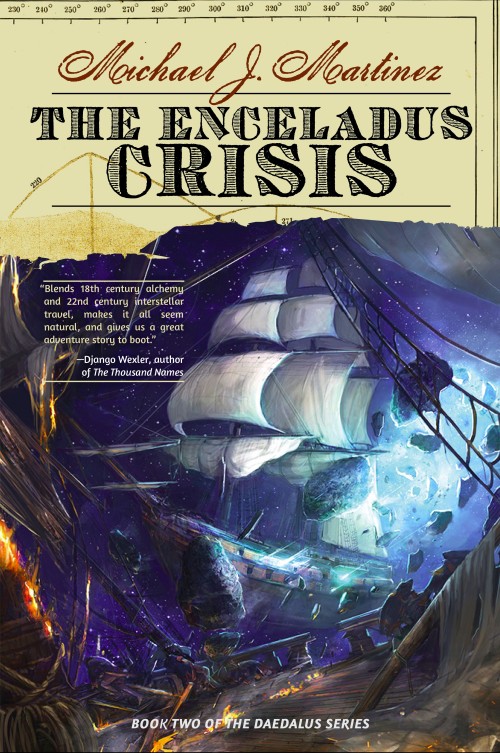 I love writing historical fantasy. I hesitate to say that it’s easier than writing secondary-world fantasy, but there are definitely times when history provides so much grist for the mill, it feels like cheating.

The first book in my current series, The Daedalus Incident, is partially set in an alternate history in which 18th century alchemy allows sailing ships to ply the Void between planets. At first, alchemy was a means to an end, simply because I needed an “engine,” if you will, for those sailing ships in space. Yet this innocuous setting element became an integral part of the plot as well, and a number of historical alchemists – Cagliostro and the Count St. Germain, most notably – became major characters.

When I started to write The Enceladus Crisis (which came out May 6), all I knew was that I wanted my historical fantasy world’s timeline to move up from the American Revolution to the start of the Napoleonic Wars. If you’re basically writing “Horatio Hornblower in Space,” as my work has been called, Napoleon has to make it in there. But I needed a hook to bring the action forward in time, something that would tie Napoleon to the alchemy-fueled history of my setting.

The Battle of the Nile in 1798 was one of Horatio Nelson’s finest naval victories. The decimation of the French fleet trapped Napoleon and his army in Egypt. But…why was Napoleon in Egypt in the first place?

Historians tell us Napoleon had hoped to disrupt English trade with India. Some say he harbored dreams of becoming a modern Alexander the Great, building a new empire that stretched across Asia. Since Napoleon fancied himself a man of science and learning, he brought a rather large team of scholars and savants with him in order to learn more about Egypt and, in true imperialist fashion, help educate and modernize the Egyptians.

Interesting stuff…and there was some potential there for a good hook. Given my research for the first book, I knew that the root of alchemy was from the Arabic – Al-Khem, an ancient name for Egypt. Many alchemists, from the Middle Ages onward, felt that ancient Egypt was the very cradle of alchemical practice. And sore research ensued. The great secrets of Egyptian alchemy were said to be inscribed on the Emerald Tablet. Said tablet was said to have been rediscovered by Alexander the Great, only to be subsequently hidden away due to its terrible secrets.

Now, if alchemy were real and quite powerful…well, something like The Emerald Tablet would give Napoleon a very good reason to visit Egypt. And his retinue of traveling scholars would make a lot more sense. Not only did I have my link to Napoleon, I pretty much had the makings of a nifty plot.

This kind of historical synchronicity is my favorite bit about The Enceladus Crisis, and it’s something that continues to fascinate and inspire me as I write more. History really can be stranger than fiction – and then I get to take history and make it even stranger.

Michael J. Martinez has been writer for two decades, with work ranging from newspaper and wire articles to magazine pieces, annual reports and, lately, genre-bending speculative fiction. He lives in New Jersey with his amazing wife and incredible daughter and a surprisingly friendly cat. He’s a proud member of the Science Fiction and Fantasy Writers of America.

1 thought on “My Favorite Bit: Michael J. Martinez talks about THE ENCELADUS CRISIS”