Martha Wells is joining us today with her novel The Edge of Worlds. Here’s the publisher’s description:

An expedition of groundlings from the Empire of Kish have traveled through the Three Worlds to the Indigo Cloud court of the Raksura, shape-shifting creatures of flight that live in large family groups. The groundlings have found a sealed ancient city at the edge of the shallow seas, near the deeps of the impassable Ocean. They believe it to be the last home of their ancestors and ask for help getting inside. But the Raksura fear it was built by their own distant ancestors, the Forerunners, and the last sealed Forerunner city they encountered was a prison for an unstoppable evil.

Prior to the groundlings’ arrival, the Indigo Cloud court had been plagued by visions of a disaster that could destroy all the courts in the Reaches. Now, the court’s mentors believe the ancient city is connected to the foretold danger. A small group of warriors, including consort Moon, an orphan new to the colony and the Raksura’s idea of family, and sister queen Jade, agree to go with the groundling expedition to investigate. But the predatory Fell have found the city too, and in the race to keep the danger contained, the Raksura may be the ones who inadvertently release it.

The Edge of Worlds, from celebrated fantasy author Martha Wells, returns to the fascinating world of The Cloud Roads for the first book in a new series of strange lands, uncanny beings, dead cities, and ancient danger. 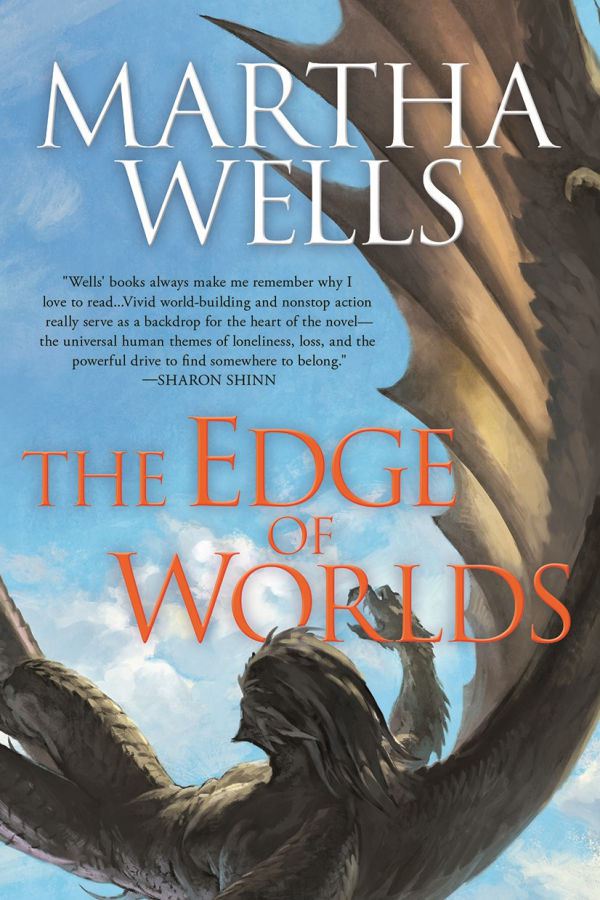 I have a lot of favorite bits in the Books of the Raksura series.  I like writing non-human characters, and I love writing my matriarchal bisexual shapeshifting flying lizard people. But my favorite bit of The Edge of Worlds is what I call the Moon and Stone Show Goes on the Road.

The two characters have a close relationship despite their circumstances. Moon has been a loner and a survivor, and has trouble conforming and fitting into a society where he’s supposed to be a consort to a queen, where his only job in the court is not to fight or hunt, but to support the queen and be the social glue that holds all the different factions and castes together.  He has no idea how to do that.

Stone is a consort who has outlived his queen and become a line-grandfather.  He’s stepped outside the society he has lived in all his life, and is in danger of losing his ties to it.  Having to help Moon and the others in the court stay alive keeps him connected.

The Books of the Raksura have always been about what happens after you find what you think you’re looking for, after you find your family and place in the world, and how you deal with trying to fit in, and trying to keep that family together and survive.  Moon and Stone have more in common than not, though their relationship tends to be irascible.  All Moon’s relationships within the court are important, especially his relationship with Jade, his queen.  But Stone is the first one who felt like family.

And writing Moon and Stone is especially fun for me when the story takes the characters out of the Raksuran territory of the Reaches and out into the wider landscapes of the Three Worlds, so they can encounter lots of strange situations and other non-human people.

Moon made his way through the sparse crowd, aware Kalam was sticking obediently close.  He sat next to Stone as the Coastal and the other groundlings left.  Kalam took a seat on the opposite side of the pool.

The sealing, a young female, stared at Moon in what was probably supposed to be a provocative way.  Moon was still irritated from the encounter with the maybe-Aventeran, and it just made him want to bite through someone’s neck artery.

Apparently this was obvious.  The sealing turned to Stone and said in Altanic, “What’s wrong with him?”

“He’s in a bad mood,” Stone explained, “he was born that way.  Does the one who’s down there with you want to talk too?”

The sealing sank into the water a little, swishing her fins in exasperation.  “I take it you’re not here for the usual.”

Stone said, “I don’t know what that is.  I want to know if you’ve had any news from the waters in the direction of the place the groundlings call sel-Selatra.”

Scaled brows drew down in thought.  “Towards the wind passage?  The land of the sea-mounts?”

“There was some–”  The sealing’s whole body jerked, as if something had grabbed her from below and tugged.  Moon’s instinct said predator and he almost shifted, catching himself just in time.  The sealing said, “Ah, someone else wants to talk to you,” and sank below the surface and out of sight.

Stone gritted his teeth and gazed up at the damp ceiling.  He said in Raksuran, “I hate talking to sealings.  Everything’s a damn bargain.”

“You hate talking to everybody,” Moon said, in the same language.  It didn’t help, but Moon felt he had to point it out.

“Shut up.  Why is he here?” Stone jerked his head toward Kalam.

Moon said, through gritted teeth, “So I don’t have to shift and kill everybody in this stupid stinking place.”

Stone sighed.  Another sealing broke the surface, and water lapped up over the edge of the pool. She studied them both thoughtfully, with an edge of contempt in her expression, then said in Altanic, “We sell isteen.  If you want to buy that, stay.  If you don’t, get out before you regret it.”  She bared fangs.  “We don’t sell information.”

Moon didn’t know what isteen was and he didn’t care.  Considering the other groundlings in here, it was probably a simple that made you stupid.  Stone just said, “That’s good, because I wasn’t planning to pay you.”

She swayed in the water, as if considering.  “Buy isteen, and perhaps I’ll give you the information you want.”

Stone said, “I don’t want isteen, and I’m not giving you anything.”

“If I give you information, I need to be paid.”  She nodded toward Moon.  “I’ll take that one.”

After having to rescue Kalam from drunken groundlings who couldn’t control their own genitals, this was too much.  Moon said, “Try.”

The sealing focused on him, really looking at him for the first time.  Whatever she saw made her scales ripple.  Whether it was aggressive or defensive, Moon didn’t know, but it nearly set off his prey reflex.  Stone tilted a sideways look at him and made a noise in his throat, just a faint growl, not enough to vibrate through the floor.  “Moon.  No.”

The message was clear.  Moon hissed at him, and laid down on the damp floor, head propped on his hand, as if prepared to wait as long as it took.

Martha Wells has written many fantasy novels, including The Wizard Hunters, Wheel of the Infinite, the Books of the Raksura series (beginning with The Cloud Roads), and the nebula-nominated The Death of the Necromancer, as well as YA fantasies, short stories, and non-fiction. She has had stories in Black Gate, Realms of Fantasy, Stargate Magazine, Lightspeed Magazine, and in the anthologies Elemental, The Other Half of the Sky, The Gods of Lovecraft, and Mech: Age of Steel. She has also written the media-tie-ins, including Stargate Atlantis: Entanglement and Star Wars: Razor’s Edge.

1 thought on “My Favorite Bit: Martha Wells talks about THE EDGE OF WORLDS”