Kristi Charish is joining us today with her novel Owl and the Japanese Circus. Here’s the publisher’s description.

Fans of Kim Harrison, Jim Butcher, and Linda Hamilton will flock to the kick-ass world of Owl, a modern-day “Indiana Jane” who reluctantly navigates the hidden supernatural world.

Ex-archaeology grad student turned international antiquities thief, Alix—better known now as Owl—has one rule. No supernatural jobs. Ever. Until she crosses paths with Mr. Kurosawa, a red dragon who owns and runs the Japanese Circus Casino in Las Vegas. He insists Owl retrieve an artifact stolen three thousand years ago, and makes her an offer she can’t refuse: he’ll get rid of a pack of vampires that want her dead. A dragon is about the only entity on the planet that can deliver on Owl’s vampire problem – and let’s face it, dragons are known to eat the odd thief.

Owl retraces the steps of Mr. Kurosawa’s ancient thief from Japan to Bali with the help of her best friend, Nadya, and an attractive mercenary. As it turns out though, finding the scroll is the least of her worries. When she figures out one of Mr. Kurosawa’s trusted advisors is orchestrating a plan to use a weapon powerful enough to wipe out a city, things go to hell in a hand basket fast…and Owl has to pick sides. 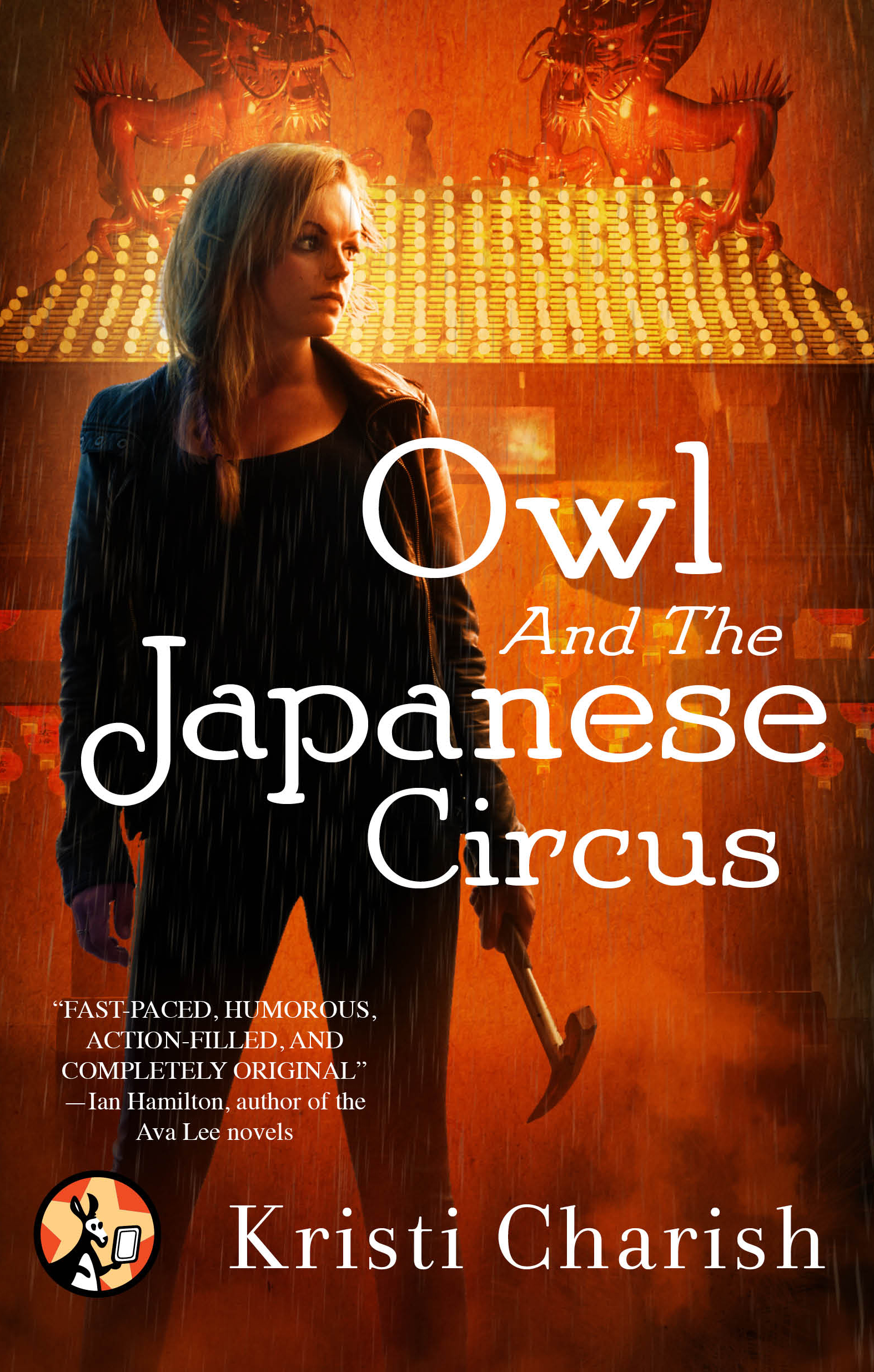 This is my very first novel. The first novel I ever finished, ever submitted to an agent, and had accepted by a publisher.

It still shocks me to write that. In part it’s because the situation is unusual. First novels aren’t supposed to get published. But mostly it’s because my main protagonist, Alix (AKA Owl), isn’t always…well… likeable. I should know. I wrote her that way. And Owl’s voice is My Favorite Bit.

“I can’t make normal friends,” I told Nadya. “I am not physically or mentally capable of connecting with people who aren’t as fucked up as I am.”

I’ll be the first to admit it. Owl is a very flawed character.

A lot of urban fantasy out there stars a knock-out, diamond in the rough, mercenary-like femme fatale with a conflict and plotline that centers around a love interest.

Owl is not that female protagonist and this isn’t that urban fantasy.

Owl is geeky, insecure, socially awkward, moderately addicted to an online RPG, probably drinks too much Corona, and to top it all off hates admitting she’s wrong. She is most definitely not the head turner when she steps into a room. Her friends fill that role. She doesn’t have super powers either. She relies on her wits, resourcefulness, and sheer guts to get herself out of tight situations…many of which, admittedly, she’s gotten herself into.

He smiled and flashed me those black dragon teeth again. “You’re rather famous in my circles now. Accidently bathing a vampire superior in sunlight during an excavation will do that. Though I still haven’t decided yet whether you’re brilliant or miraculously stupid for managing to deliver the sarcophagus and collecting your pay.”

…It should also probably be mentioned Owl has an uncanny knack for making bad situations worse. But Owl’s poor decision making skills aren’t from stupidity or lack of forethought. It’s because following her conscience has steered her wrong before and the results were spectacularly catastrophic. She’d be the first to tell you keeping your morals intact is expensive, and most people when called upon have no interest in paying up. Especially when it means giving up a working fridge and cable TV.

People are real happy to make friends with you when a two-thousand-year-old mummy knocks off half their team, but returning the favor always pisses them off. No one likes to pay up out of the goodness of their heart; that’s why I usually get cash up front.

Owl isn’t forgiving when it comes to people, and why should she?

Being nice and playing by the rules is what got her kicked out of grad school in the first place. The first law of not ending up a scapegoat? Make damn sure someone else is standing ahead of you in line. Morals and ethics are nice and all but don’t mean much when you’re on the run from a pack of vampires who want you dead. Knowing that if she could do it all over again she might not make the same decisions hurts, though you’ll never hear it from her.

Yeah, Owl has some anger issues to work through.

Oh…and then there’s her cat, Captain.

He feinted back and pulled on the leash in an attempt to break my hold and get back to Charles. Nope, not desensitized. Getting better at manipulation.

Owl has her faults but she also has a lot of redeeming qualities hidden under there; she’s independent, loyal to a fault, tries to do the right thing (though her interpretation of the ‘right thing’ is often a little out of the box), is determined, and hell bent on digging herself out of her own messes- be they her fault or not. Owl is not the girl who pines after the guy or waits for someone to rescue her- she’ll handle the rescuing on her own, thankyouverymuch. She tries desperately to make the best out of her bad situations while trying not to wallow in her past- a struggle I’m hoping will resonate. There’s an element of survival in Owl’s attitude as she tries to forcefully cut out an unconventional place in an unconventional world.

But make no mistake about it. This isn’t the UF heroine who confronts the corrupt institution, brings the bad guys to their knees, and otherwise redeems herself, her career, and probably the corrupt institution. This is the woman who when faced with those odds tells the institution and everyone else involved they can all go to hell. There’s something that really appeals to me about that kind of character- the one who’s no longer afraid to say exactly what she wants because the worst has already happened.

I think that’s why I love writing Alix so much- her lack of a filter means she finally has the freedom to say the things no one else can or will. The things ‘nice women’ aren’t supposed to say or do. For better or worse she’s unapologetically herself. There’s something really freeing about writing a female protagonist like that.

My favorite bit is Owl’s voice, and I’m hoping you guys will love her- faults and all- as much as I do.

Kristi is the author of OWL AND THE JAPANESE CIRCUS (Jan 13th, 2015, Simon and Schuster Canada/Pocket Books), an urban fantasy about a modern-day “Indiana Jane” who reluctantly navigates the hidden supernatural world. She writes what she loves; adventure heavy stories featuring strong, savvy female protagonists, pop culture, and the occasional RPG fantasy game thrown in the mix. The second installment, OWL AND THE CITY OF ANGELS, is scheduled for release Jan 2016. Her second urban fantasy series, KINCAID STRANGE (Random House Canada), about a voodoo practioner living in Seattle, is scheduled for release mid 2016.

Kristi is also a scientist with a BSc and MSc from Simon Fraser University in Molecular Biology and Biochemistry and a PhD in Zoology from the University of British Columbia. Her specialties are genetics, cell biology, and molecular biology, all of which she draws upon in her writing. She is represented by Carolyn Forde at Westwood Creative Artists.

3 thoughts on “My Favorite Bit: Kristi Charish talks about OWL AND THE JAPANESE CIRCUS”