Gabriel Squailia is joining us today with their novel Viscera. Here’s the publisher’s description:

The Gone-Away gods were real, once, and taller than towers.

But they’re long dead now, buried in the catacombs beneath the city of Eth, where their calcified organs radiate an eldritch power that calls out to anyone hardy enough to live in this cutthroat, war-torn land. Some survivors are human, while others are close enough, but all are struggling to carve out their lives in a world both unforgiving and wondrous. Darkly comic and viciously original, Viscera is an unforgettable journey through swords-and-sorcery fantasy where strangeness gleams from every nook and cranny. 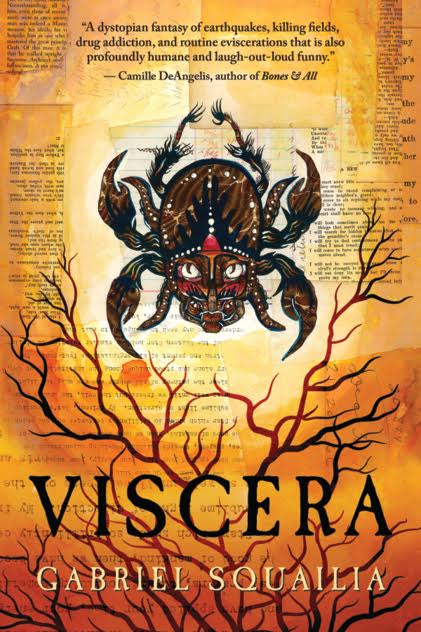 Rafe Davin wasn’t supposed to be in this book. In the first draft of the first scene, he was CULTIST #2, and I gave him a short, grisly role with a few muttered lines of dialogue.

Then my editor asked me to pull a particular trick on the reader, which you can ask me about once you’ve read it, and suddenly—thanks to certain necessary changes in the lighting and camera angles—Rafe had a name and a personality.

The moment he opened his mouth I fell in love with him. Yes, he was irritable, prone to flashes of anger at the slightest provocation. Sure, he was dastardly, and did things within the first thirty pages that ought to have damned him to some sort of narrative retribution well before the third act. Worse, he was an addict, which, so far as my neighbors were concerned, meant he would deserve whatever came his way.

Hadn’t he stolen? Hadn’t he spilled the blood of innocents?

Wasn’t all of it within his own control?

Then what was I doing making half of this book about him?

Love is a funny thing that way. In the case of my imaginary romance with Rafe Davin, it led me to dig deeper into his past. I knew he was worthy of my love; now I’d find out why. I knew that he’d joined the cult of Fortune-worshipers known as the Assemblage out of pure desperation. Now I discovered what had caused him to fall so deep in such a short period of time.

My favorite bit was hidden, at first—a few scattered references to his past, which Rafe fought viciously to avoid remembering. Then, during a decidedly bizarre medical procedure, these glimpses of the life he’d once lived bobbed to the surface.

Again, my editor wanted more, and so I turned up the lights, took the plunge, and rewrote the scene.

What emerged was something between a fever-dream and a flashback. Having spent a hundred-odd pages with Rafe the Cultist, I was brought face-to-face with another version of him—a Rafe who was loved and cherished, in community with other queers like himself.

They had a place to live, in Mrs. Dallow’s Cut-Rate Boarding House. They had a tiny society, with its own laws and customs. They had each other, however briefly, and they made the mistake—so common, so understandable—of imagining that this warmth was safety.

For the first time, I understood the true horror that underlies all the splatter and squish of Viscera. I’m transgender, and it’s rare for me to feel like I’ve been fully understood. Most every close relationship I have is the result of painstaking work, exhausting explanation, and the constant, nagging fear of rejection.

What I fear is that the loves that sustain me will be torn away.

What I fear is our fragility—this tenuous connection we have to a world that makes it clear we’re not welcome here.

What I fear is the violence that so often hangs over our lives, threatening us from within as well as without. What I fear are the words that are shouted at me from the windows of passing cars, the glares that follow me through stores and streets, the hands that grope me in crowded bars at night—hands that curl so easily into fists.

Those fears, knotted together, form the tragedy that put a blade in Rafe Davin’s hand. Now it was plain. I knew why I’d forgiven him.

His character wasn’t a part of my plan, and even once he’d taken over, this hallucinatory scene wasn’t something I outlined. But it immediately became the dark, beating heart of Viscera.

It was, to me, the most terrifying thing I’d ever written. As soon as it was done, I came out of the closet.

I had nothing left to hide.

Gabriel Squailia is an author and professional DJ from Rochester, New York. An alum of the Friends World Program, they studied storytelling and literature in India, Europe, and the Middle East before settling in the Berkshires of western Massachusetts with their partner and daughter. Squailia’s first novel, Dead Boys, was published by Talos Press in 2015.