Douglas Hulick is joining us today with his novel Sworn in Steel. Here’s the publisher’s description.

It’s been three months since Drothe killed a legend, burned down a portion of the imperial capital, and found himself unexpectedly elevated into the ranks of the criminal elite. As the newest Gray Prince in the underworld, he’s not only gained friends, but also rivals—and some of them aren’t bothered by his newfound title. A prince’s blood, as the saying goes, flows just as red as a beggar’s.

So when another Gray Prince is murdered and all signs point to Drothe as the hand behind the knife, he knows it’s his blood that’s in danger of being spilled. As former allies turn their backs and dark rumors begin to circulate, Drothe is approached by a man who says he can make everything right again. All he wants in exchange is a single favor.

Now Drothe finds himself traveling to the Despotate of Djan, the empire’s long-standing enemy, to search for the friend he betrayed—and the only person who can get him out of this mess. But the grains of sand are running out fast, and even if Drothe can find his friend, he may not be able to persuade him to help in time… 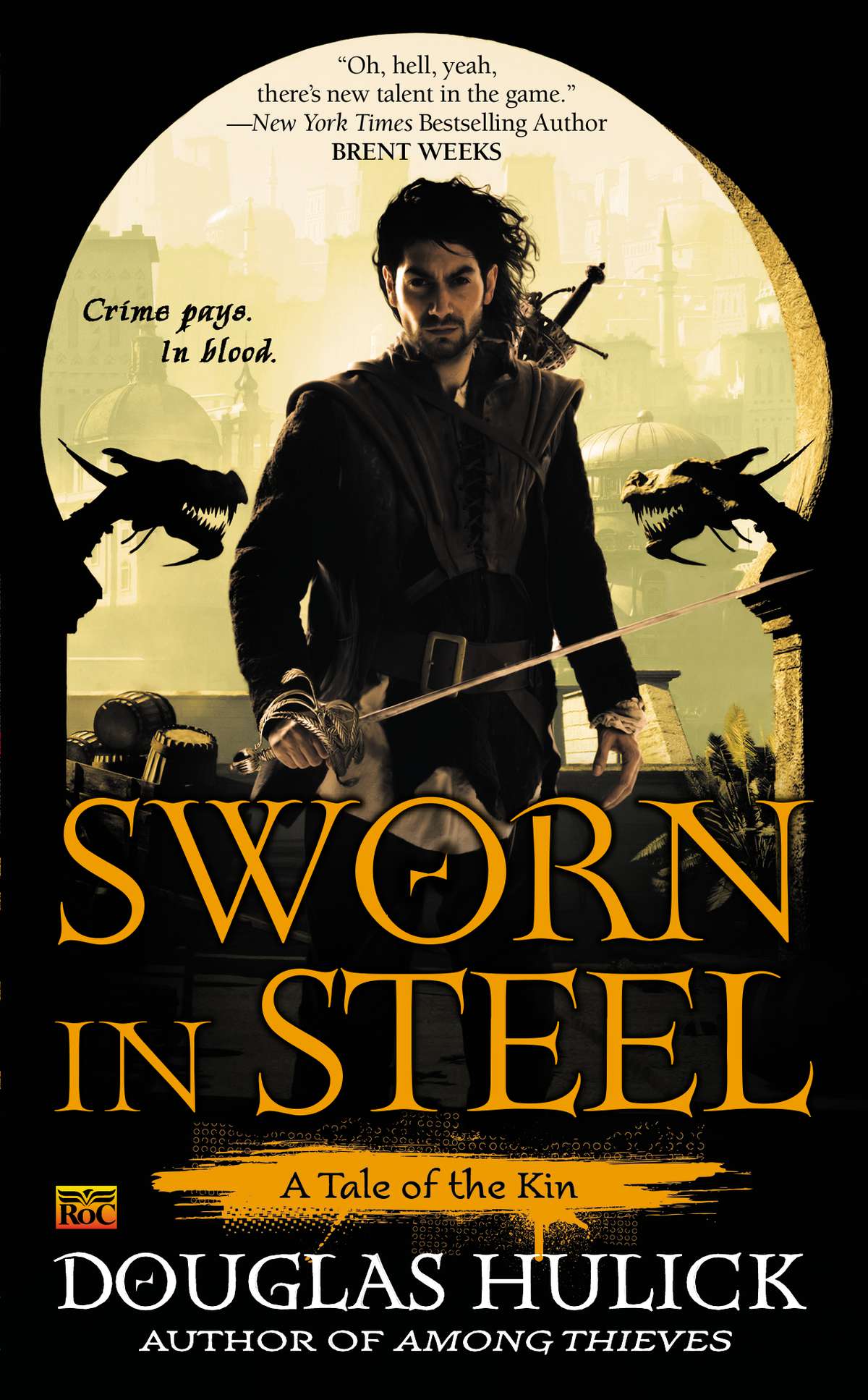 When I sat down to write this piece, I actually had to stop and think for a while.

See, the thing is, if we were talking about my first book, Among Thieves, I could have named several likely candidates in an instant. It would to have been choreographing the sword fights with friends; or maybe researching the historical thieves’ cant I used/borrowed/reworked throughout the book; or even that one wonderful scene that came out golden and never changed in a book that shifted around it. Any of those would have qualified with ease.

But Sworn in Steel? That’s harder. And I think that’s because Sworn was a harder book for me to write. Not thematically, not structurally, not narratively – no, it was just plain difficult. Wringing blood from a stone would have been easier some days, I think. And because of that, a lot of my (more recent) memories of the book involve simply wanting to get it done. To be finished with it. To kick its ass out the door and never see it again. To….

Well, you get the idea.

So in one sense, I felt like I should say my favorite bit was simply writing “The End.” Except that wouldn’t really be true. Why? Because while finishing the book off and sending it in felt soooogoooood, it wasn’t what I would call my favorite part of actually writing the thing. It was an accomplishment and a relief, yes, but something I treasured? Something I would look back on and say, “That? That part was AWESOME!” No. I hadn’t quite reached the Stockholm Syndrome phase of writing, and so I couldn’t honestly say being done was my favorite bit.

So I sat, and I thought.

And I realized that there were, in fact, a number of parts of this book I liked just fine. Things I liked so much that they could even, maybe, be considered favorite bits. The part where Drothe, my hard-nosed criminal protagonist, becomes the unwilling patron for a troupe of traveling players; or the scene in the cellar where a man’s shadow gets beheaded; or even the bit where, much to my UK editor’s amazement, I took an aspect of their cover – my main character wielding a long sword, to be specific — and managed to not only retro-fit it into the story, but to make it important as well. (I’m rather proud of that last one, actually, considering Drothe only ever uses a rapier.) But while all of these were fun, there was one other thing I kept coming back to over and over. One character, actually. One name.

Aribah was a character the wasn’t supposed to happen. A character (who wasn’t in the outline, mind) that popped up out of nowhere and quickly turned into a key foil for my main character, Drothe.

Why is she my favorite? The easy answer might be because she’s just plain cool. She’s an assassin (cool), she’s self-assured (cool), she’s bad-ass (cool), and she’d just as soon kill Drothe as look at him when she firsts meets him (cool AND smart).

But that’s not it.

I think I love her so much because, in the course of a mere five scenes with Drothe, we get to see her develop as a person. She goes from a hard-shelled, black and white killer to a nuanced young woman filled with doubts and fears and determination, all pulling her in different directions, all visible around the edges despite the tight leash she keeps on herself. What could easily have stayed a kick-ass, shadow-shrouded cliché of a character transforms into a complex, rounded person I found I liked being with—a person with her own concerns and problems, most of which have little to do with the main protagonist. A woman who, when the final decision came, nearly broke my heart, even though I knew it was coming.

It would be easy to say that I am falling in love with my own writing here, and I suppose in a way I am. But I think there is more to it than that. There’s a facet of unexpected discovery to Aribah, of finding a character who refused to stand off to the side and simply do her job. This happens to authors all the time, of course (and it has happened to me as well), but every now and then, one of these uppity characters are different. They’re more than just fun or quirky or demanding—they’re people. People so nuanced that you’re not sure you’ll ever be able to do them justice, that you’ll never be able to put all of what makes them them on the page.

That, in all her stubborn and uncertain (but gentle) pride, is my favorite bit:Aribah. My young assassin who walked off that page and became someone I will never forget, even when all around her (and me) was effort and pain.

Sworn In Steel book page (with order links for U.S. and U.K.): http://www.douglashulick.com/?page_id=828

Douglas Hulick is the author of the Tales of the Kin series, which currently consists of Among Thieves and Sworn in Steel. He is a full-time stay-at home father, part-time writer, and part-time swordsman (no, really). When not walking the dog or trying to determine the relative might of pens vs. swords, he can often be found haunting the aisles of books shops, usually in either the sf, crime, or history sections. He is very fond of breakfast.