Danielle Paige is joining us today with her novel Dorothy Must Die. Here’s the publisher’s description.

I didn’t ask for any of this. I didn’t ask to be some kind of hero.
But when your whole life gets swept up by a tornado—taking you with it—you have no choice but to go along, you know?
Sure, I’ve read the books. I’ve seen the movies. I know the song about the rainbow and the happy little blue birds. But I never expected Oz to look like this. To be a place where Good Witches can’t be trusted, Wicked Witches may just be the good guys, and winged monkeys can be executed for acts of rebellion. There’s still the yellow brick road, though—but even that’s crumbling.
What happened?
Dorothy. They say she found a way to come back to Oz. They say she seized power and the power went to her head. And now no one is safe.
My name is Amy Gumm—and I’m the other girl from Kansas.
I’ve been recruited by the Revolutionary Order of the Wicked.
I’ve been trained to fight.
And I have a mission:
Remove the Tin Woodman’s heart.
Steal the Scarecrow’s brain.
Take the Lion’s courage.
Then and only then—Dorothy must die! 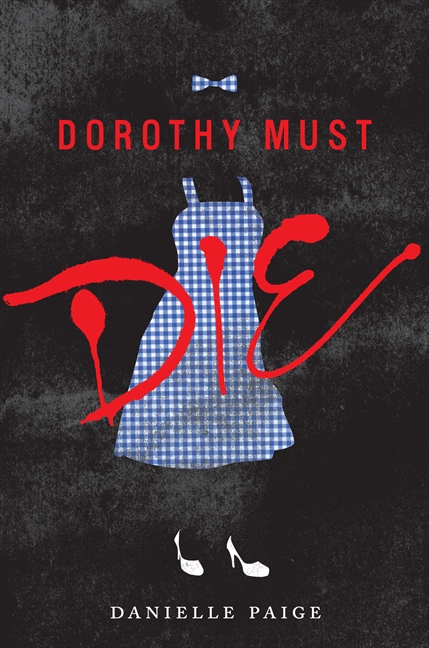 Dorothy Must Die is the story of Amy Gumm, an outcast in her hometown of Mission, Kansas who wants more than anything to beanywhere but there. She gets her wish, where her trailer is picked up by a tornado and she is dropped in Oz.  But Oz is nothing like the one in the books or the movie, it’s darker and twist-ier. Gone is the Technicolor, instead there is crumbly faded, Yellow Brick Road! And Dorothy is no longer Kansas sweet. She’s kind of super-evil and ruling Oz with an Iron fist and those magical shoes of hers.

Her friends have changed, too, but they are still just as loyal to her.  The very things that they once travelled a Yellow Road to get are now the things that corrupt them. The Scarecrowuses his brain to conduct inhumane experiments on the winged monkeys, the Tin Woodmanis a trained killer whose “heart” justifies his every action, and the Lion’s “courage” has jumped the shark –he’s terrorizing Oz, hyped up on the fear of others like a drug.

Upon arriving, Amy is immediately inducted into The Revolutionary?Order of the Wicked, a group of not-so-wicked witches that are?determined to rid their land of Dorothy.

There are a lot of bits that I love in my book, Dorothy Must Die. But my favorite bit is when Amy meets Indigo, a Goth munchkin on the crumbly Yellow Brick road.  She has tattoos that move and tell the story of Oz. Indigo’s sassy and foul mouthed and a heck of a lot of fun.

Indigo’s tattoed body tells the story of Oz.  But since she’s not going to strip down for Amy, she uses her words. When Amy asks what happened to Oz, Indigo gets to say, “Dorothy happened.”

When I first story any project, the beginning is about plotting and world building and characters sketching. And the first few days of writing mean getting down the bones, but there’s always that moment where the work comes to life.

ReimagingOz was a little daunting for me. The Wizard of Oz series of books were some of the first I loved. And the movie cast a spell that literally made me stop whatever I was doing and watch it every time it came on.

So as a fan, The Yellow Brick Road was a bit of sacred ground for me.  And as a writer, I had written more realistic fare (daytime television, a TV pilot.)  So taking on magic and witches was new for me, too. But when I could see indigo in all her tattooed glory the world clicked into place for me. I wanted to know what she was going to do next; I wanted to hear what she had to say. And what happens to her and Amy in the first few chapters sets up what Amy will face throughout the series.

From her presence to the winking witch on her skin, Indigo is Amy’s first guide into my Oz. Dorothy is evil, the world of Ozis upside down. Welcome to Oz.

Danielle Paige is a graduate of Columbia University. Before turning to young adult literature, she worked in the television industry where she received a Writers Guild of America award and was nominated for several Daytime Emmys. She currently lives in New York City.