D. Lieber is joining us today with her novel Conjuring Zephyr. Here’s the publisher’s description:

Retreating underground to escape a devastating ice age, humans build a new society. When magic is discovered and harnessed for survival, the citizens of Terrenus establish theories and principles of how to use it.

Kai Stephenson is determined to prove magical principles aren’t set in stone. Having lost her younger brother in a tragic accident, she will ensure such accidents never harm anyone else. She enrolls at the most elite university to gain the knowledge she needs to achieve her goal. Overconfident that living as a boy at an all-boys university will only be a minor inconvenience, Kai is convinced her classmates will never discover that she’s a woman. After all, women aren’t capable of higher forms of magic, and her boyish figure certainly doesn’t hurt her disguise.

Hiding her true identity becomes a problem when her new friends start to awaken her repressed sexuality. 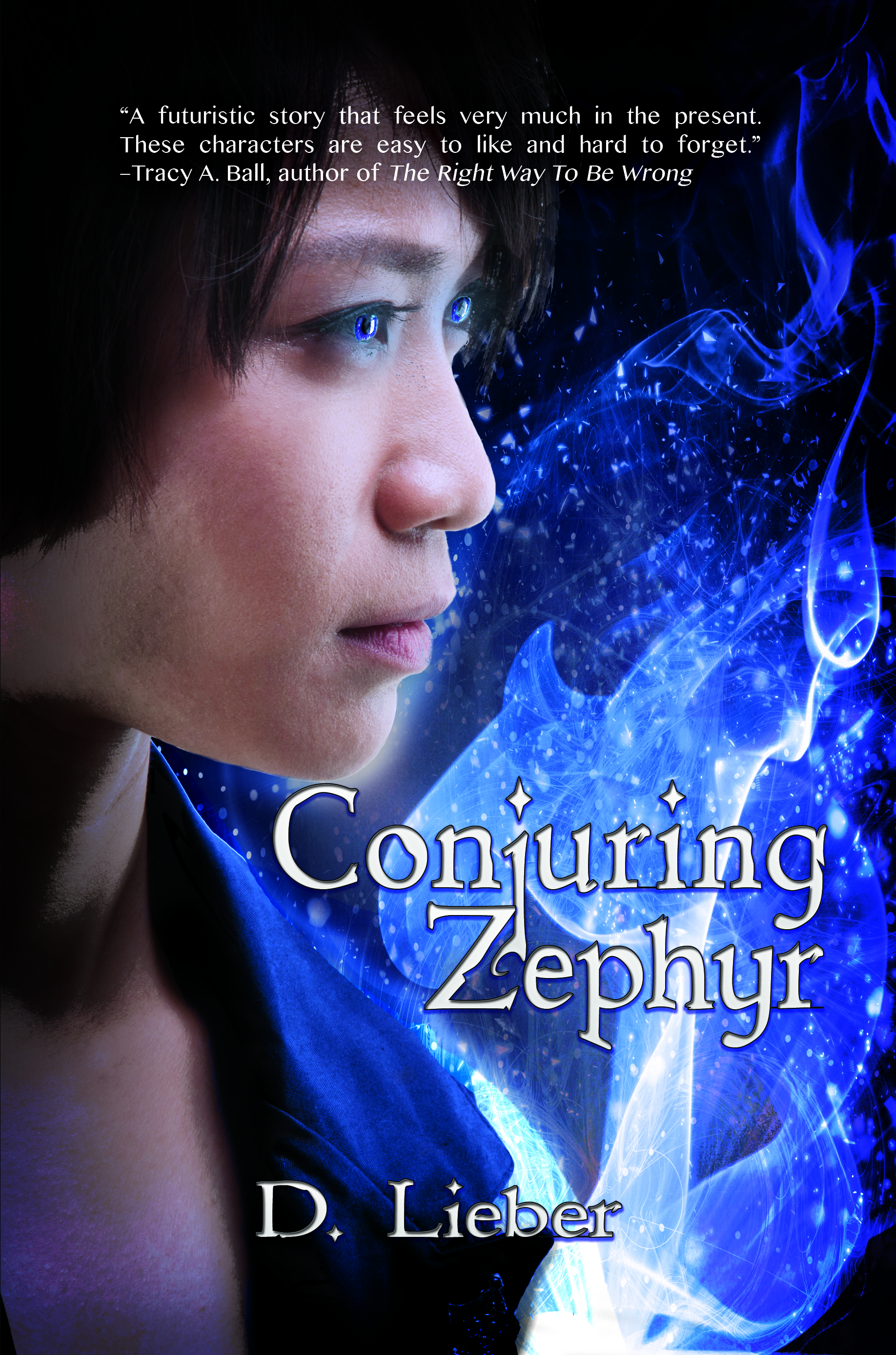 I have many favorite bits about Conjuring Zephyr. I spent a lot of time developing the magic and building the subterranean society in which Kai and her friends live. I’m pleased I was able to weave social commentary into the story without bashing my readers over the head with it. I think my readers will find they can ignore it completely, if they choose, and just enjoy the story.

I had fun satirizing why I think modern science is stuck, western views on female sexuality, as well as male and female gender roles. But my favorite bit was simply love finding Kai even when she was preoccupied and didn’t have time. Because, isn’t that how it happens to us all?

What I was really excited about while writing Conjuring Zephyr was who Kai would choose from all of her potential love interests.

I spend a lot of my free time watching anime and Korean television, and I absolutely love reverse harem stories. But what makes me really squee like a fangirl are the stories where female characters disguise themselves as men to accomplish their goals.

I get really into it, and I binge watch until I know the ending. I’m usually disappointed. The protagonist always chooses the guy who was a complete jerk to her through most of the show.

Watching any foreign television certainly takes some getting used to. I will even go so far as to say that it takes dedication. Because, let’s face it. At first exposure, some of that stuff just seems downright weird. I wanted to introduce this genre to western audiences in a way they could understand without so much effort.

When I was in the audience of an authors’ panel at C2E2 in 2014, one of the panelists said she writes stories she wants to read. It seemed like such an obvious thing to say afterward, but it really gave me the push I needed to put pen to paper.

I set out to write a story in the genre I love and end it the way I wanted. But as I was writing, I began to understand exactly why the protagonist always picks the jerk.

Now, I’m not going to tell you who Kai chooses, because that would spoil it. I will say that, not only will it surprise the reader, but it surprised me as I was writing it.

Once I set my characters up and let them go, they took me to places I never would have predicted. They became alive, tormented by past tragedies, fighting desires they couldn’t understand or express in their repressed society, and chasing a goal that was accepted as impossible from the beginning.

D. writes stories she wants to read. Her love of the worlds of fiction led her to earn a Bachelor’s in English from Wright State University.

When she isn’t reading or writing, she’s probably hiking, crafting, watching anime, Korean television or old movies. She may also be getting her geek on while planning her next steampunk cosplay with friends.

She lives in Wisconsin with her husband (John), retired guide dog (Samwise) and cat (Yin).