Beth Cato is joining us today with her novel Call of Fire. Here’s the publisher’s description:

When an earthquake devastates San Francisco in an alternate 1906, the influx of geomantic energy nearly consumes Ingrid Carmichael. Bruised but alive, the young geomancer flees the city with her friends, Cy, Lee, and Fenris. She is desperate to escape Ambassador Blum, the cunning and dangerous bureaucrat who wants to use Ingrid’s formidable powers to help the Unified Pacific—the confederation of the United States and Japan—achieve world domination. To stop them, Ingrid must learn more about the god-like magic she inherited from her estranged father.

When Lee and Fenris are kidnapped in Portland, Ingrid and Cy are forced to ally themselves with another Ambassador from the Unified Pacific: the powerful and mysterious Theodore Roosevelt. But even his influence may not be enough to save them when they reach Seattle, where the magnificent peak of Mount Rainier looms. Discovering more about herself and her abilities, Ingrid is all too aware that she may prove to be the fuse to light the long-dormant volcano . . . and a war that will sweep the world. 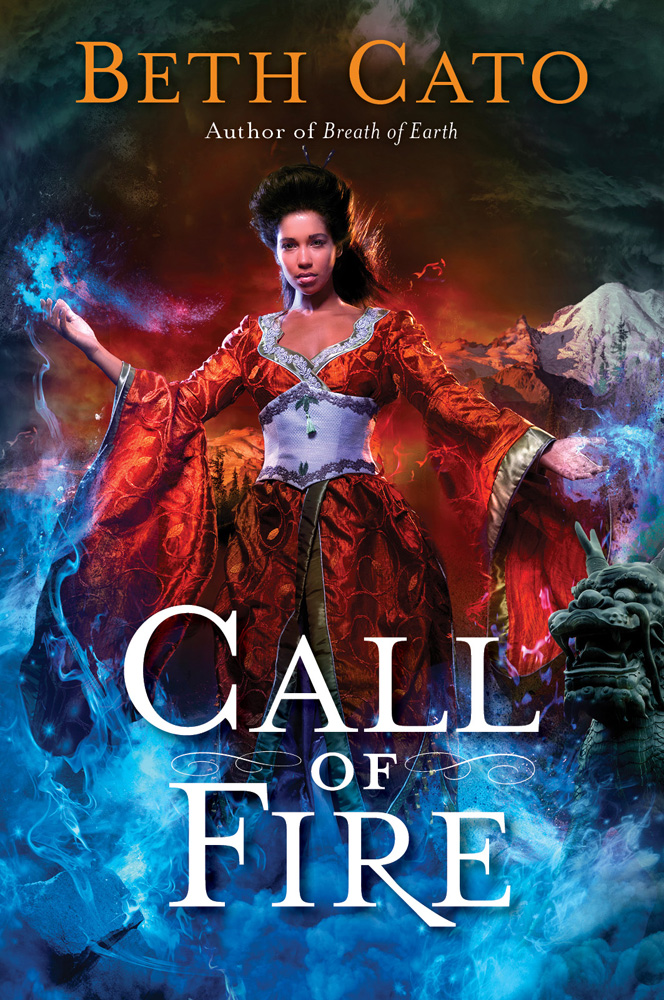 One of the things I love about fairy tales and mythology is how karma plays an integral role in shaping a character. The shepherd girl saves a beast from a hunter’s trap, and later when the girl needs help the most, the creature is there to save her in turn. It’s the sort of pay-it-forward gratitude that I wish was more evident in our daily lives.

In my first series, The Clockwork Dagger, I played with this concept by bringing in my own version of gremlins–misshapen constructs of magic and science that were hideously cute. My heroine helps one particular gremlin who plays a major part in her life from then on.

I didn’t have anything gremlin-like in the first book of my new series, Breath of Earth. The setting is darker and delves into some heady matters of racism and sexism. As I outlined my second book, Call of Fire, I had a scene where my heroine, Ingrid, needed to escape a particularly nasty antagonist. I debated having her use her geomancy powers in some way, then realized she could utilize another super power instead: kindness.

I thought of fairy tales and decided the fae could be my answer. Fantastic creatures are very much part of this world, from unicorns to selkies to ghosts, so it only seemed right for Ingrid to meet some new being. I decided to go with a new unique take on sylphs.

Like the gremlins in my other series, the sylphs in Call of Fire didn’t simply want a brief appearance. Oh no. They wanted to take over part of the plot of that book as well as the next. I was happy to oblige.

Without delving into spoiler territory, I can say that my sylphs are rather like large gray moths with humanoid bodies. They originate from the California Sierra Nevada range, and I establish them as a unique invasive species that are well adapted to the New World. They can turn invisible, though their low buzzing noise can give them away. Also, they love, love, LOVE sweets.

That gave me a chance to play around with another favorite subject of mine: baked goods. I run a food blog called Bready or Not and I am known for bringing deliciously evil cookies to conventions. Since my books’ world features an America with a heavy fusion of Japanese culture, I brought real Meiji-era pastries like an-pan and jamu-pan into the story. (Imagine tender yeast rolls stuffed with yummy fillings.) Using these baked goods gave me a chance to develop my setting in a new way and geek-out over scrummy foods, all while following actual fairy lore regarding their affection for confections.

I want Breath of Earth and Call of Fire to enlighten readers about real incidents and attitudes at the start of the 20th century, but my books are entertainment, too. My sylphs introduce some much-needed whimsy amid my dark alt-history. I hope that my readers enjoy them as I much as I did!

Nebula-nominated Beth Cato is the author of the Clockwork Dagger duology and the new Blood of Earth Trilogy from Harper Voyager. Her newest novel is CALL OF FIRE. She’s a Hanford, California native transplanted to the Arizona desert, where she lives with her husband, son, and requisite cat. Follow her at BethCato.com and on Twitter at @BethCato.