Ivan Ewert is joining us today with his omnibus, Famished: The Gentlemen Ghouls Omnibus. Here’s the publisher’s description:

It’s the driving force behind survival.

The Velander bloodline carries an ancient secret: power and immortality. But that power requires a key to unlock: human flesh. Gordon Velander finds himself an unwilling participant in a play for survival – but he won’t be powerless for long.

It’s the driving force behind passion.

The Gentleman Ghouls have survived for centuries due to cunning and careful planning but their world in unraveling. Gordon has vowed to take the Ghouls down no matter what, but he’s fighting a war—both within and without. The Ghouls, on the other hand, are not waiting patiently for the end to come.

It’s the driving force behind revenge.

With the Farm and the Commons destroyed, the Ranch is the last outpost of the Ghouls. With the bitter end in sight, Gordon must face his greatest challenge yet—claiming his own fate as other forces make their moves.

Revenge is sweet.
Passion is fulfilling.
But survival trump all. 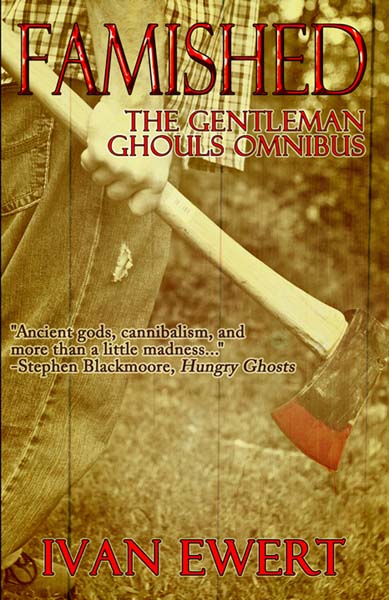 My favorite bit of the entire Famished: The Gentleman Ghouls Omnibus?

Writing dialogue for my ‘demons’.

Orobias, Carreau and the others have mouths full of beehives, all sweetness and summer and danger. They’re very different from one another, with personalities which remain consistent through the work even if their physical forms and goals alter with the times.

Orobias is one of the few constants of the trilogy; Gordon Velander’s constant companion and literal lifeline for a good portion of the story. While he began as a half-embodied voice, I always knew more or less how he ‘looked’ in his natural state. The contrast between his sweet sing-song method of speech and his grotesque appearance comes from an early fascination with Goetia, where it seemed many demons spoke in flowery and pleasing terms despite their inherent wickedness and bestiality.

Carreau appears far less often, but is always a driving force behind Orobias’ actions and motivations, again a nod to the Goetic hierarchy which informs my otherworld. I knew immediately that I wanted his voice to be more focused and direct, to sound more like a modern-day character than a supernatural entity. Still, when he goes into the physical pleasures of our world, my inner editor stops on all fronts and allows him to rhapsodize for as long as he wants.

Carreau, in many ways, takes my inner hedonist and gives him the strong and liberated voice my Midwestern upbringing frowns upon. Orobias, on the other hand, is a patchwork of many little voices in my head that sing and tweet and sob and sulk throughout the day.

As such, unlike the rest of my writing, I never struggle for their words. They just croon out into my ears and I write precisely what they say. There’s never a moment of sitting on my hands, trying to figure out how they would respond to another character’s observations or a change in their situation. In many ways, because they’ve been in my head so long, they’re more real than the human characters I have to poke and prod at.

Editing the demons is … harder. Killing my darlings is never so difficult as when I’m trying to wrestle Orobias to the ground when he turns philosophical, or to take a plate of food away from Carreau in order to move along the plot. Often it’s the very last thing I do in edits, saving it for the final moment, hopeful that I can trim elsewhere as needed to give them center stage just a little bit longer.

Of course, that’s precisely WHY we kill our darlings. If the books were a buddy movie featuring the two of them – Fear and Loathing in Gehenna – I could take all the time and delicious words I wanted to. One of my admitted flaws, though, is privileging talk over action and philosophy over motivation. Being aware of that lets me cut through the worst excesses of my favorite bits, with a little help from my beta readers and editors.

Ivan Ewert was born in Chicago, Illinois, and has never wandered far afield. He has deep roots in the American Midwest, finding a sense of both belonging and terror within the endless surburban labyrinths, deep north woods, tangled city streets and boundless prairie skies. The land and the cycles of the year both speak to him and inform his writing; which revolves around the strange, the beautiful, the delicious and the unseen.

His work has previously appeared in the award-winning anthology Grants Pass, as well as in Close Encounters of the Human Kind, Human Tales, Space Tramps: Full-Throttle Space Tales and Beasts Within 3: Oceans Unleashed, while his culinary writing has appeared in Alimentum: The Literature of Food. An early  treatment of Famished, then named Vorare, as well as separate works titled Solstice and Idolwood, appeared in the e-zine The Edge of Propinquity from 2006 to 2011. He was the sole author to span all six years of that publication.

FAMISHED: THE FARM is his first published novel.

Ivan wears a number of creative hats professionally, including graphic design and acting. He is currently working as voice talent on a lyric proposal to the Poetry Foundation, and appeared as himself alongside his family in the award-winning documentary The Suicide Tourist. He designed the book jacket for Industry Talk: An Insider’s Look at Writing RPGs and Editing Anthologies, as well as logos for Timid Pirate Publishing and such performing companies as Sage Studio, Lucy’s Café, and the Inhabit Theatre.

In previous lives, he has worked as an audio engineer, a purchasing agent, a songwriter, a tarot reader, a project manager and, for a remarkably short stint, an accountant. In his spare time, Ivan occupies himself with reading, gaming, and assisting with the jewelry design firm Triskele Moon Studios. He currently lives near the Illinois-Wisconsin border with his wife of thirteen auspicious years and a rather terrifying collection of condiments and cookbooks.