Arianne ‘Tex’ Thompson is joining us today with her novel One Night in Sixes. Here’s the publisher’s description.

The border town called Sixes is quiet in the heat of the day. Still, Appaloosa Elim has heard the stories about what wakes at sunset: gunslingers and shapeshifters and ancient animal gods whose human faces never outlast the daylight.

And the daylight is running out. Elim’s so-called ‘partner’ – that lily-white lordling Sil Halfwick – has disappeared inside the old adobe walls, hell-bent on making a name for himself among Sixes’ notorious black-market traders. Elim, whose worldly station is written in the bastard browns and whites of his cow-spotted face, doesn’t dare show up home without him.

If he ever wants to go home again, he’d better find his missing partner fast. But if he’s caught out after dark, Elim risks succumbing to the old and sinister truth in his own flesh – and discovering just how far he’ll go to survive the night. 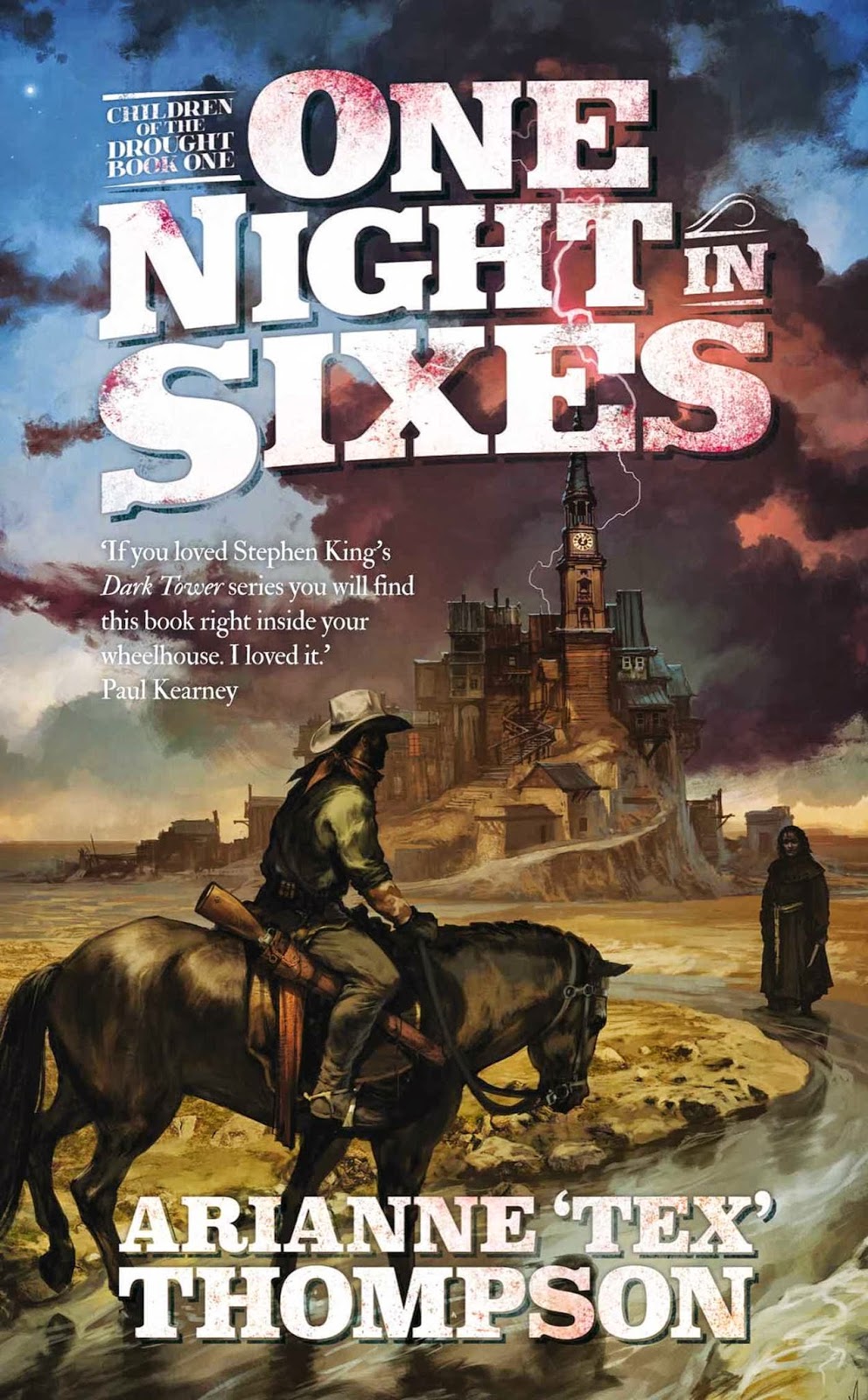 At the time, doing a fantasy Western sounded dead easy.

“Right,” I thought.  “I’ll just rip the stuffing out of American history, shove it through a wormhole, and then mash whatever comes out the other side into a smooth supernatural paste – cowboys and Indians and fishmen and the whole nine yards.  Call of Cthulhu meets Howdy Doody.  It’ll be great!”

Well, it was a mixed bag.  The research made me sweat.  The history made me cry.  But right from the beginning, the dialogue was a delight.  Because when you inflict a line like this on the world –

Here, go dish you up some of that pie.  They got apple raisin with calf slobbers on it, and it’s going quick.

– you not only thrust the reader face-first into what Mel Brooks once called “authentic frontier gibberish”, but effortlessly justify the hours you spent marathoning Deadwood episodes and wallowing in 19th century slang.  (Calf slobbers is meringue, by the way – and no, I didn’t make that up.)

But the dangerous thing about words is that if you ever stop to wonder where they come from, they will suck you in quicker than a UFO drive-by.  Like, how can you have a Western without using words like adobe, lasso, mustang, pueblo, stampede, or palomino?  They’re all derived from Spanish – so where in this secondary-world frontier fantasyland are all the Spanish-speaking people?

Well, all right – in our world, Spanish is a Romance language originally brought to the New World by the conquistadors.  In frontier fantasyland, the only seafaring humans are near the poles, because the temperate waters are dominated by fishmen, so… okay, maybe the Roman Empire was more of an AtlanteanEmpire.  Maybe that’s since broken up and spread out, so instead of (human) Frenchmen and Italians and Spaniards, we have the (aquatic) freshwater Emboucheaux, deepwater Taglienti, coastal Castamarín, and so on.

And granted, their languages won’t be the same as ours, because the people speaking them aren’t the same as ours.  Fishmen use sign language to communicate underwater, which would almost certainly have an effect on their spoken languages too, and they actually have neuter-sex individuals, so Latin’s grammatical neuter gender probably would have stuck around.  (This was the point where I realized I was in over my head, and threw up the bat-signal.  Jason Wells-Jensen heroically answered the call, and saved my speculative-linguistic bacon with no less than three constructed languages.)

But that is not all, said the Cat in the Hat – no, that is not all!  If the indigenous peoples of frontier fantasyland were first contacted by non-humans, that changes the equation considerably.  The fishmen aren’t mammals, so they don’t carry human/livestock diseases – so if they got to the New World first, there wouldn’t be huge, devastating epidemics paving the way for big conquests.  They probably couldn’t even penetrate the drier inland areas, water-bound as they are.  Which means they couldn’t just steamroll the locals – if they wanted to stick around, they’d have to figure out some way to co-exist.  So by the time the “guns, germs, and steel” Euro-Nordic humans from across the water finally do establish a toehold in Upper Canadia, the more southerly native populations will already have had generations of inter-species trade with the fishmen (who are probably acting as a natural disease barrier in whatever major river-systems they’ve worked their way into), and THAT means that when these cultures inevitably collide… well, suffice to say that Dances With Wolves, it ain’t.

“Dang, Tex,” you may be saying. “It’s called My Favorite Bit, not My Favorite Backstory Bloatfest.  What does any of this have to do with anything?”

Well, strange as it is to say it: my favorite bit is English.  I love how infinitely bendable and pliable it is.  I love how it’s the Katamari Damacy of languages, constantly growing and picking up new words as it rolls along.  I love how pulling a single thread of English through that wormhole to fantasyland ended up dragging linguistics in after it… and history… and biology… and culture… and then real actual people, like Jason, who have since become some of my best friends.

In the story, the language barriers between all these different people are a huge deal, with misunderstandings leading to fatal consequences.  But backstage, the roots and branches of my own everyday language have connected me with more ideas and people than I ever would have found otherwise – and the book and I are both enormously improved because of it.

Arianne “Tex” Thompson is a home-grown Texas success story.  A relentless fantasy enthusiast dual-wielding a bachelor’s degree in history and a master’s in literature, Tex has since channeled her interests into an epic fantasy Western series, kicking off July 2014 with the release of ONE NIGHT IN SIXES.   She is also an active member of SFWA, Codex, and Novelocity, and currently serves as editor for the DFW Writers Conference.  Find her online at www.thetexfiles.com and on Twitter as @tex_maam!

7 thoughts on “My Favorite Bit: Arianne ‘Tex’ Thompson talks about ONE NIGHT IN SIXES”